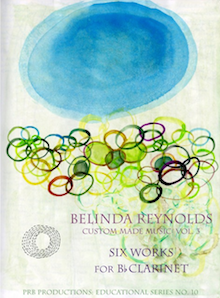 Belinda Reynolds is a composer, who comes from the world of “art music” and the likes of John Luther Adams. One critic said of her music that it “appeals directly to the heart without beating around any emotional bushes.”

That may be an accurate portrait of Reynolds’ approach to life in general. She spoke to us the other day about a new project she’s been working on. At 46, besides writing for ensembles, she is devoted to music education and, above all, to a customized approach to learning.

She lives in San Francisco, has had residencies in several youth orchestras and hosts a studio for students interested in composition and piano. What’s unusual is that she invests the time to create her own teaching pieces: For her piano students, for example, she composes contemporary music oriented to their personalities and capabilities.

In the last few years, as she developed these pieces, Reynolds began to realize that her training had always been tuned to virtuosi not to amateur or student musicians. And so it occurred to her, why not develop a new kind of musical curriculum offering contemporary music for this group of musicians and cast it in a book? A publisher answered the call and she’s been off and running ever since.

As part of this unique project, she’s produced three books, including two for piano (one focused on duets; the second, on solos), and the third for clarinet. A fourth book, due early next summer, focuses on beginning-level chamber music for guitar ensembles, particularly quartets. Other books will address the cello, the violin, and the flute.

Her plans are to create a book for each of a variety of instruments, in each case collaborating with an expert to guide the offering to the particular needs of intermediate to advanced musicians, including pieces for solos, recitals, and ensembles.

For her book dealing with the clarinet, Reynolds drew in Jeff Anderle, a faculty member at the San Francisco Conservatory of Music, who suggested offering two clarinet solos, two clarinet duos, and two recital pieces for solo clarinet and piano. Reynolds wrote the pieces and then sent them off to five other teachers around the country who, in turn, passed them on to their students. The reviews were positive.

All Reynolds’ books are available through music stores, as well as custommademusic.com and sheetmusicplus.com. It’s possible to download samples. Each book comes with a play-along CD.

As to why she launched this project, Reynolds said that her intention in the last 20 years particularly has been to be a good ‘music citizen.’ “I think my obligation in that respect is to be part of the music community and to educate the next generation of young musicians, as well as their parents … And I don’t mean by dumbing down music but, rather, by encouraging a deeply participatory experience with all kinds of music, as a player and a listener.”

She added, referring to the way composers and musicians are empowered, “I think you have more ownership as a performer if you feel free to make things up.”

“Helping a musician develop into a sensitive, insightful performer is a tricky thing,” she wrote in a 2007 blog entry. “There are no hard and fast rules. However, interpretation is, in a way, a type of composing: It is the creation of a perspective and a process from which to perform a piece of music. So, doesn’t it make sense to use composing to unleash a player’s potential?”