Periodically, the Kids Around the Bay column includes profiles of local school music programs. Our purpose is to provide parents with a sense of hows schools in their districts are doing, as well as how programs compare. Recently, we spoke with Michael Pakaluk, who heads the music program at Lynbrook High School.

Lynbrook High is on the west side of San José, and you could say it reflects the highly competitive, Type-A personality and culture that is one signature of Silicon Valley. The school opened in 1965 and from the beginning has had an affinity for technology, both in terms of the ‘physical plant’ as well as school culture. It won an Intel School of Distinction Award in Science in 2011.

The school has 1,846 students, of which 83 percent have an Asian background. Half the graduating class last year went on to the University of California. The 2013 ACT average composite score was 28; the mean SAT math score, 695; writing, 665. Lynbrook remains among the top 100 public high schools in the nation and was included on a 2012 top 10 list of California high schools that also includes Lowell High in San Francisco, Dougherty Valley High in San Ramon, and Monta Vista High in Santa Clara.

The school’s music program has been a tremendous success for many years and has won countless awards for excellence. The marching band, for example, inevitably finishes first or second in the Northern California Band Association Finals. The concert bands include a wind ensemble, a symphonic band, and a concert bank comprised of freshman only.

Altogether, there are 230 students in the music program; about 80 in the orchestra, including 50 string players; 55 to 65 musicians in each of the three concert bands, and 12 students in a jazz band. The program also includes a color guard and ‘winter’ guard.

There is an audition process that, for the wind ensemble, for example, includes performing all 12 major scales, performing an excerpt from a piece and a sight-reading exercise.

Few student go on to major in music, but those few have gone on to the likes of UCLA, Northwestern, and, not long ago, a violinist went to Indiana University.

Many of the music groups also travel regularly, near and far; 54 members of one of the bands played a series of concerts in France last summer. There’s a trip planned for Hawaii this summer. The cost of the one-week trip to Normandy was more than $200,000, which is a measure of the program’s ambition and success, and the commitment of parents as well as the Lynbrook Instrumental Music Boosters, a nonprofit corporation that provides support to the program.

We focus a lot on leadership skills, taking initiative, and working in groups ... one of the great benefits of playing in an ensemble, for example, is learning skills that not only help in music but also translate to functioning in society, specifically learning the art of flexibility and developing the capacity to work with others for the common good.” — Mike Pakaluk

“A lot of high schools have booster programs’ says Mike Pakaluk, Lynbrook’s music director. “But without ours, I’m not sure we could do what we do at this level. The school itself can only give modest support, and so we’ve come to depend on the boosters for time, energy and money. Without them, there’s no way I could follow the vision I have for this program.”

Pakaluk says that other factors that strengthen his program is the role of local middle schools in sending promising musicians. “I challenge anyone to find a top high school music program without a strong middle school.”

Mike Pakaluk, Lynbrook’s music director, took a B.A. in music education from the Hartt School in Hartford and an M.A. in trumpet performance from the University of New Mexico. He has studied trumpet with, among others, Jay Lichtmann and Roger Murtha, and has performed with, among many others, the New Mexico Symphony Orchestra, the San Luis Obispo Symphony, the Central Coast Jazz Collective, and these days plays with both the Mission Peak Brass Band and the Menlo Brass Quintet. 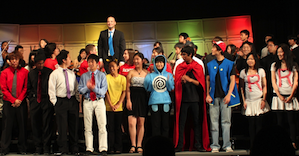 “My goal,” Pakaluk said earlier this week, “is for students to enjoy a safe, comfortable environment, along with the opportunity to make music with their classmates. We focus a lot on leadership skills, taking initiative, and working in groups. I find that one of the great benefits of playing in an ensemble, for example, is learning skills that not only help in music but also translate to functioning in society, specifically learning the art of flexibility and developing the capacity to work with others for the common good.”

Recently, Pakaluk took his wind ensemble to an invitational event at Sonoma State. It was held at the Green Center. Pakaluk’s program included a piece by David Maslanka, Give Us This Day, along with Tchaikovsky’s finale from Symphony No. 4.

“We had a great performance,” Pakaluk recounted. “One of the adjudicators — and this is someone who has been doing this for a very long time — told the group they were the best high school horn section he’d heard in 10 years.

“That meant so much to these kids. It gave them not merely a sense of pride, but a genuine feeling of validation and accomplishment. This was one of those moments that I hope they’ll remember in 20 years when they’ll reflect on how much it meant to them and perhaps how it influenced their lives in some way.”