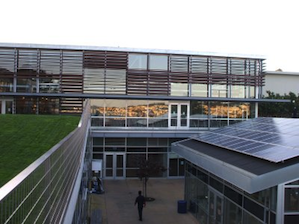 Periodically, the Kids Around the Bay column profiles one of the local school music programs, to provide parents with a sense of the resources and philosophy offered, as well as how programs compare. This week we spoke with Marty Stoddard.

The Lick-Wilmerding High School in San Francisco was born at the end of the 19th century from wealth made in the California Gold Rush. Among the school’s more famous founders: James Lick, a wildly successful land speculator, and Jellis Wilmerding, a wealthy merchant, who, among his other associations, was a member of the notorious Second Vigilante Committee of 1856.

There were originally two schools: The California School of Mechanical Arts, or “Lick,” and the Wilmerding School of Industrial Arts. After a series of evolutions, the Lick-Wilmerding High School opened in 1955, still with the founding idea of fostering “educated craftsmen.” And craftswomen one might add; the school is coed. The school’s motto has since morphed into “Head, Heart, Hands.”

Lick has long had a vibrant performing arts department, which includes an instrumental program that for the last 22 years has been under the direction of Marty Stoddard. She is perhaps better known in local classical music circles as the Program director for the John Adams Young Composers program at the Crowden Music Center; conductor of the Oakland Civic orchestra; and a member of the San Francisco Composer’s Chamber Orchestra. Stoddard is herself a composer.

The instrumental music program includes a chamber orchestra, an advanced jazz combo, an intermediate jazz combo, and a “21st-century ensemble” for brass, woodwinds, percussion, and all rhythm section instruments. Courses focus on jazz and electric musical styles. There is no traditional concert band. Four instrumental classes are offered, this year with a total of 63 students.

The school’s Vocal Music Program includes three courses: one each for women’s chorus; men’s chorus and vocal ensemble. The program is aligned with the National Standards for Music Education and this year has about 50 students. The director is William Sauerland, himself a countertenor, whose resume includes an MA from the Royal College of Music; performances with Chanticleer, among many other choruses and choirs; and voice teacher with the Pacific Boychoir Academy in Oakland.

Lick has abandoned all AP courses, including an AP music theory course. Music theory is now embedded in each of the performing classes. “Our goal,” explains Stoddard, “is to establish musical literacy but not sacrifice the enormous value of playing for courses on theory. The approach is to learn both simultaneously and let students pace themselves. I think what distinguishes us is the degree to which we offer individual attention.”

Besides the two members of the music faculty there is an auxiliary staff of five “coaches” who provide help with string technique, for example, and chamber music ensemble work. Occasionally, Stoddard also brings in fellow composers to work with students.

The school does not recruit music students but the admissions office is sensitive to musical talent or interest. In the words of Stoddard, “You can’t get in solely on musical ability, but it can be a largely noted factor.”

“I would say that overall we’re looking for kids that want to acquire a strong academic background, who want to be involved with the community and be truly conscious citizens, and who have some kind of passion.”

“When I think of our music students, here’s someone that comes to mind. I had a girl a few years ago, a jazz pianist who was not terribly accomplished, but very determined. Eventually, she worked her way up and became one of our TAs (teaching assistants). It’s a position where you help conducting and rehearsing. Her goal was to be an improv jazz pianist and at one point she put together a kind of tool kit with methods one could use to improvise. She went on to NYU, got in a jazz band, and I like to think began a life-long concern with jazz advocacy.

“That's as satisfying to me as someone who makes the jazz circuit, because part of the mission of a school program should always be to encourage a lasting association with the arts. And of course, the skills involved in mastering an instrument are eminently transferable to other disciplines.”

Music students often end up playing in the likes of the San Francisco Youth Orchestra or The Young People’s Symphony Orchestra, or the Peninsula Youth Orchestra. Some also attend the Jazz School in Berkeley.

Full tuition at Lick is $38,000. While no scholarships are available there is “robust” financial aid.