'Give Music a Chance'

In recent years the prospect of music education in public schools has dimmed considerably, but the present and future look even worse. Most states are facing huge budget deficits, none worse than California, and all aspects of education are endangered.

Private sector and individual contributions are now more important than ever, and the Mt. Diablo Music Education Foundation's new $450,000 fund-raising drive could serve as an example.

Similar to the California Lottery (contributing up to $1 billion annually to education) or Yerba Buena Art Center's Dream House Raffle, Mt. Diablo is offering incentives to contributors, if on a much more modest scale. 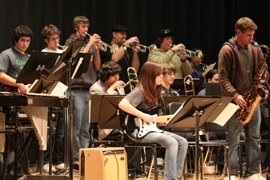 The foundation supports music programs in the Mt. Diablo Unified School District, and the current program, called "Give Music a Chance," uses $10 donation coupons with a chance to win big prizes.

They include a seven-night Alaskan Pacific Sail for a family of four; a five-day family vacation in Orlando at one of Disney World's resorts, and many others. Winners will be announced on May 15 at the foundation's All Area Music Festival, possibly in Concord's Sleep Train Pavilion. Event details are still pending.

Support for music programs is critical: The 4th grade instrumental music program was eliminated this year, and the state's budget crisis is threatening 5th grade music next year.

Your choice: Curse the Recession darkness or light a candle with a donation ... and gain a chance for winning a great prize.

The photo is of a group of musicians from the Mt. Diablo school district, at the last Music-a-Thon, which featured students performing for 12 hours in a successful venture to raise funds from ticket purchases.

'Give Music a Chance' — the Larger Picture

Local activity on behalf of music and the arts is indispensable, but there is also an essential campaign going on across the country. Today, April 13, is National Arts Advocacy Day, an opportunity for individuals to join with arts advocates everywhere.

This is the 23rd annual observation of the event, spearheaded by a national conference in Washington, D.C., by Arts in America, a half-century-old organization, which serves more than 150,000 organizational and individual members.

From Arts in America and the national conference, the suggestion is:

* Let your voice be heard when you visit your members of Congress to make the case for the arts and arts education.
* Take advantage of opportunities to network with colleagues from your state and across the country.
* Increase your knowledge of how to advocate and influence decision makers.

Jennifer Higdon, a composer to be featured (again) at the next Cabrillo Festival of Contemporary Music (see next item), received the 2010 Pulitzer Prize "for distinguished musical composition by an American that has had its first performance or recording in the United States during the year."

The $10,000 prize was awarded for Higdon's Violin Concerto, premiered last year in Indianapolis. The Pulitzer announcement calls it "a deeply engaging piece that combines flowing lyricism with dazzling virtuosity."

Also nominated as finalists in this category were: String Quartet No. 3 by Fred Lerdahl, and Steel Hammer by Julia Wolfe.

Cabrillo Gears Up for 48th Season 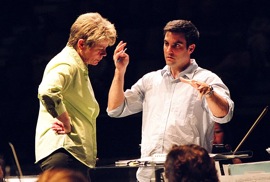 The Cabrillo Festival of Contemporary Music, the nation's longest-running (to say "oldest" would be inappropriate) festival of contemporary orchestra music, will champion and celebrate its cause in Santa Cruz, Aug. 1-15.

Speaking of the first-time participation by all featured composers, Alsop said:

The Cabrillo experience is all about people and relationships: how we use art to express ourselves; how we communicate with and without words; how we learn and assimilate; how we form opinions and tastes; and, importantly, how we are bound together by creativity and the thrill of discovery.

Guest artists include percussionist Colin Currie, the sextet eighth blackbird, Kronos Quartet, cellist Wendy Sutter, as well as composer-pianist Kevin Puts who will perform as soloist in his own composition.

Opening night in the Santa Cruz Civic Auditorium will feature the West Coast premieres of British composer Mark-Anthony Turnage’s Scherzoid, Grammy- (and now Pulitzer-) winner Jennifer Higdon's On a Wire, and the world premiere of Michael Hersch's Symphony No. 3, commissioned by the festival.

The Rakewell of the Future Sings Today

Can a 25-year-old student singer be an ideal Tom Rakewell? Eleazar Rodriguez was Saturday night. 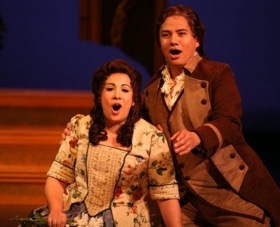 The San Francisco Conservatory of Music senior sang the title role in the school's Cowell Theater production of Stravinsky's The Rake's Progress, and he was tremendous.

The Mexican tenor — with memorable performances of Cavalli's Egisto, Harrison's Young Cesar, and a Barbiere Almaviva already under his belt — dazzled with his usual effortless use of a beautiful lyric voice, limited in volume but with a heft to it, and well-projected.

To sound effortless and to come through with flawless diction in Stravinsky's super-syncopated, skittish music is a challenge, and Rodriguez met it with aplomb, likely to originate with his exceptional voice coach, Cesar Ulloa.

Conducted expertly — and just a bit too loud in the tiny theater — by Bruno Ferrandis, the student orchestra played heroically. The brass, usually the weak link, was especially strong; Paul Heggeseth's trumpet solos were outstanding. 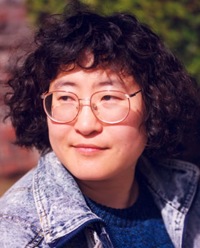 The San Francisco Girls Chorus' season-closing concerts will mark the 100th anniversary of Chinese immigration at Angel Island, featuring a work by Chen Yi at the June 4-5 events in the San Francisco Conservatory of Music. The program also includes works by Stravinsky, Dvořák, Krenek,  and others.

This will be the world premiere of Angel Island Passages, a multimedia commission, performed in collaboration with the Cypress String Quartet and filmmaker Felicia Lowe. Says Chen Yi:

I was born and raised in China and went through the dark period of Cultural Revolution 40 years ago, during which general education was interrupted and Western music was prohibited for 10 years. My passion and hard work helped me overcome this hardship and to become the first woman to earn a master's degree 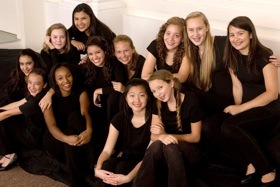 in music composition in China.

As a Chinese-American woman composer who blends Chinese and Western traditions, I seek to transcend cultural boundaries through my music and my teaching. By creating music, I share my life experience and my cultural perspective with people all around the world, and I particularly hope to connect with people with similar backgrounds.

I've painfully learned about the history of Chinese immigration through Angel Island. I want us to use our music to share the true history, to voice our belief in equal rights, to improve our society, and to look forward to a brighter future.

Music for the Eyes at the Ballet

I didn't need help with Tchaikovsky, but years spent at New York City Ballet performances — still at City Center, before Lincoln Center became a reality — certainly deepened my appreciation through such George Balanchine classics as Allegro Brillante (to what should have been Piano Concerto No. 3), Mozartiana (Suite No. 4), and Theme and Variations (Suite No. 3). 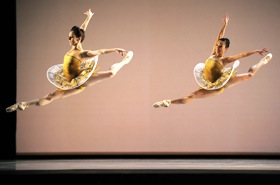 Where Balanchine became an indispensable guide was with his illuminating, bewitching choreography to Stravinsky's music. From the Violin Concerto to Agon, to Apollo, and many others, music that may be challenging in the concert hall became part of the viewer, painlessly.

There are two concurrent San Francisco Ballet mixed-repertory programs performed through the month in the Opera House, both offering similar musical riches. Two of the most attractive pieces are Christopher Wheeldon's Rush, set on Martinu's Sinfonietta La Jolla, and Renato Zanella's Underskin — a world premiere — which uses Schoenberg's Transfigured Night.

Program 7 pairs Rush with Yuri Possokhov's Classical Symphony to the Prokofiev work, and Jerome Robbins' The Concert, to music by Chopin. The "Haffner" was at times louder than necessary (a frequent problem at the ballet); the Desyatnikov score featured Franklyn D'Antonio (violin) and Susannah Poretsky (mezzo) as soloists.

Nathan Fifield conducted the Martinu score expertly, and he did equally well with Chopin in The Concert, Michael McGraw at the onstage piano, braving the dancers' wild antics ... until storming off at the end, in a scene tailormade for Victor Borge.

Aspen Music Festival Music Director David Zinman suddenly and unexpectedly announced his resignation last week, effective immediately. He has held the position since 1997. Alan Fletcher, president and CEO of the festival, said that he was unable to comment on the reasons for Zinman's sudden resignation. Zinman himself made no further comment.

Fletcher, who was fired by the festival in October and rehired in November, said that he and Zinman had disagreed about certain faculty cuts made in response to the recession last year. But he added: "I have never had any problems with David. He raised the level of everything here and left a great legacy."

Laszlo Varga, whose career ranged from being principal cellist of the New York Philharmonic to teaching at 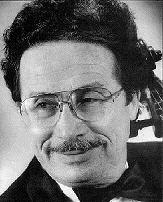 I finally decided to hang up my cello for good at my venerable age of 85.5. Lately, I have been bothered with a variety of problems, and I can hardly lift my cello, let alone play it normally, thus it is time to quit practicing, travelling, flying, etc.

However, I am not without exciting plans. I am well into publishing my Legacy, a 10-CD issue of my recordings of live concerts, mostly performing the six Bach suites, violin partitas and 15 other of my arrangements for cello and piano, with other celli — by Vivaldi, Mozart, Beethoven, Schubert, Kodaly, R. Strauss (Don Quixote for six instruments, and the Sonata Op. 6 for cello and 10 winds), also versions of the Beethoven Triple Concerto and Schoenberg's Verklärte Nacht.

Oh yes, and the Beethoven Violin concerto on my 5-string cello piccolo. All performed while in Houston between 1995-2000.

Michael Tilson Thomas' New World Symphony has a great new home, and our Miami brethren, the South Florida Classical Review, has the report on the event:

The New World Symphony left its nondescript Lincoln Theatre home for the polished wood and gleaming fixtures of the Arsht Center's Knight Concert Hall Saturday, for a performance that fully justified the grander surroundings.

Michael Tilson Thomas, the orchestra’s artistic director and one of the world’s leading Mahler specialists, led the orchestra in an intense, resounding performance of the Fifth Symphony. And the idiosyncratic New York pianist Jeremy Denk gave an energetic account of Aaron Copland’s rarely heard Piano Concerto.