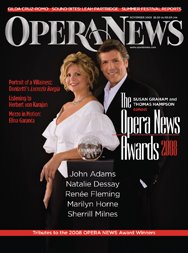 be released on iTunes at the end of August, and later on CD, Sept. 14. There is a brief video available free online for your prepurchase sampling of the material.

The two complete works were recorded live in Davies Symphony Hall during last year's Mahler Festival; the excerpts in 2007. The special interest in Mahler — reflected in recent SFS seasons and, even more, in the upcoming one — is occasioned by the 150th anniversary of his birth in 2010, and the centenary of his death in 2011.

SFS performances of Mahler in the 2010-2011 season include the Symphony No. 5 in September and February (the latter with Zubin Mehta and the Israel Philharmonic); Symphonies No. 2, 6, and 9 in May, as well as the Rückert Lieder and Des Knaben Wunderhorn songs by the SFS Chorus also in May.

Among 17 new grant awards, totaling $650,000, to Bay Area artists from the Creative Work Fund are:

- Paul Dresher and the Berkeley Symphony; for a work featuring two of Dresher's large-scale invented instruments.

- I Made Moja and Gamelan Sekar Jaya; to create The Creatures of Balinese Mythology, exploring monkeys and frogs, which appear repeatedly in many guises and contexts throughout Javanese mythology.

- Jess Curtis, Guillermo Gómez-Peña, and the Yerba Buena Center for the Arts; to create a performance-installation, Dances for Non/Fictional Bodies.

- Sean Dorsey and the Queer Cultural Center; for developing Notes From the Gender Underground, an interdisciplinary dance theater concert. 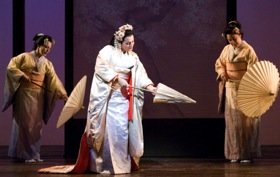 Four San Francisco Opera productions will be telecast on KQED-TV between Aug. 26 and Sept. 23. Each opera will air beginning on a Thursday evening at 8 p.m., on channel 9, with numerous additional airings in subsequent days — including a 2 a.m. Friday scheduling for insomniacs.

The series, hosted by Rita Moreno, begins with a bang: the uniformly acclaimed Puccini Madama Butterfly with Patricia Racette in the title role, in a career-defining performance.

On Sept. 2, it's Mozart's Don Giovanni, with Mariusz Kwiecien in the title role, followed by the Sept. 16 telecast of Puccini's La rondine with Angela Gheorghiu. The final program, on Sept. 23, is Camille Saint-Saëns' Samson and Dalilah, with Olga Borodina and Clifton Forbis.

Each program includes backstage interviews with singers, conductors, directors, and other members of the artistic and creative team. The four operas are sung in their original languages, with English subtitles provided.

These films — along with the Opera's simulcasts and cinemacasts — use the technology of the company's Koret-Taube Media Suite, the first permanent HD broadcast-standard video production facility installed in an American opera house.

Leah Crocetto, one of the most promising singers in recent Merola and Adler Fellowships programs, is profiled in a Musical America article by SFCV's own Georgia Rowe. Among Crocetto's accomplishments:

In the last year, she sang her first recital as past of the Schwabacher Recital Debut series, joined San Francisco Opera Music Director Nicola Luisotti in a concert performance of Pergolesi's Stabat Mater, made her professional opera debut in the company’s mainstage production of Suor Angelica and appeared as a soloist in the San Francisco Symphony’s performances of Schubert's Mass No. 2 in G major, conducted by Michael Tilson Thomas.

Next year, Crocetto will sing her first Leonora in Il trovatore in Bordeaux. Additional roles, including Liu and Desdemona, are on the horizon. Eventually, she hopes to add Amelia, Tosca, and Violetta to her repertoire. In the meantime, she'll appear as the High Priestess in San Francisco Opera's September season-opening of Aida. And she's scheduled to sing two small roles in the company’s upcoming production of Alfano’s Cyrano de Bergerac, which will put her onstage with Placido Domingo. 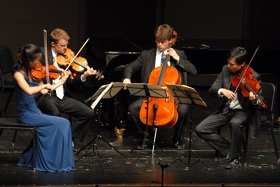 Although a devoted fan of [email protected] since the festival's beginning (actually since its predecessor in La Jolla, also a Wu Han/David Finckel creation), I couldn't get to it this year until Saturday. And boy! Do I regret missing out on the past two weeks.

Here's the point though: there is still the rest of this week left.

Every aspect of this festival is glorious; I especially love the free 6 p.m. International Program Prelude Concerts featuring young artists at the beginning of great careers. Every single Prelude concert I attended over the years was memorable, Saturday's among the very best.

Preceding the evening's Paris, City of Light concert, reviewed in this issue by Steven Winn, the Prelude concert — true to its name — featured French Romantic classics written before the 1920-1928 period covered by the main concert.

The Amphion String Quartet's performance of Ravel's 1903 F-Major Quartet went from gripping intensity to a fetching realization of the très rythmé marking of the second movement, followed by broadly sung passages, leading to the suspense and virtuoso playing of the last movement. Violinists Katie Hyun and David Southorn, violist Wei-Yang Andy Lin, and cellist Mihai Marica received a well-deserved ovation.

Franck's 1879 Piano Quintet in F Minor, a similarly romantic but very different work — both passionate and repressed, with shades of the Kreutzer Sonata — received an equally remarkable performance from Roman Rabinovich, a pianist whose mature, self-assured playing belies his chronological age, intense violinists 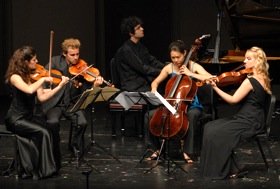 Michelle Ross and Timothy Braun, violist Molly Carr, and self-effacing cellist Alice Yoo. From where I sat, I couldn't see Yoo, so I made an extra effort to hear her — and realized that she blended into the ensemble with rare and commendable artistry.

Speaking of seeing and hearing, this first experience of the still-new Center for Performing Arts at Menlo-Atherton was an important part of the visit to the festival. The hall is a beauty, with terrific acoustics (Paul Scarbrough of Akustiks) and featuring one of finest pianos I have ever heard. It seats 500, so the crush of the other [email protected] venues doesn't exist here.

Hodgetts+Fung Architecture and Design has created an unusual, truly functional, aesthetically pleasing, and instantly comfortable hall. The raked audience space provides great sight lines — except for seats on the side and only if a violist is sitting in front of the cellist. There is great imagination in the effective simplicity of stage lighting from the ceiling projecting shadows of the grid hiding them to the wall behind the stage.

Consider the rest of the week at the festival, but especially Saturday, the final day. Before the evening finale, there will be two important free concerts: the 1 p.m. Koret Young Performers Concert, and the 6 p.m. Prelude Concert, the latter with a most attractive program of Janácek's Sonata for Violin and Piano (with Hye-Jin Kim and David Fung), and the Dvořák String Sextet in A Major, with Timothy Braun, Michelle Ross, violins; Molly Carr, Mario Gotoh, violas; and Alice Yoo, Gabriel Cabezas, cellos. Both events take place in the above-extolled Center for Performing Arts.

Much More on Marlboro

In the last column, there was an item about rare broadcasts from the Marlboro Music Festival. Then on

Saturday, Harry Eyres had a rapturous report from the festival in The Financial Times, including this:

Around 1960, the festival, or camp, took on the shape it has kept, with minor variations, ever since, with senior musicians joining the very best and most inspired of the younger generation in deep exploration of the chamber and vocal repertoire, for as wide a variety of instruments and voices as possible, free from the usual pressures of inadequate time and ever-looming performance. Concerts are given (this weekend and next are the last of the season), but they are the outgrowth of the learning and working process, rather than the raison d’être. Marlboro was founded in acts of generosity and dedication that have proved durable: Distinguished musicians give their services, and give up summer opportunities, for up to seven weeks of communal living on the miniature campus.

[Founder Rudolf] Serkin said that everyone at Marlboro was a student. Pablo Casals came for 13 years, its most celebrated but least typical period, when the cult of the world’s most famous musician conducting orchestral concerts threatened to derail the emphasis on collegiate chamber music learning and playing. But in the end Casals was more the great musician than the great celebrity, refreshing his own sources of creativity as well as giving to others, in what he called an Arcady of music.

If you want to catch up with the festival, American Public Media has archived these audio features: As well as other audio such as these:
Back to top

L'elisir, in Another Bottle

The Merola Class of 2010 completed its double-cast run of L'elisir d'amore at Sunday's matinee in windswept, pleasantly arctic Cowell Theater. (We are in the sixth or seventh week of what is normally just a few chilly days of the "San Francisco summer.")

The Thursday/Saturday cast is reviewed elsewhere in this issue. In the Friday/Sunday performances, the young cast was uniformly respectable, with solid performances from Valentina Fleer (Adina) and Alexander Lewis (Nemorino).

Excitement arrived with Belcore, specifically when he started singing. What went on before, another of director Nicola Bowie's inanities (Belcore forcing his way through a row in the audience, only to run around to backstage and then make his entrance, out of breath) had nothing to do with him.

Strutting and made to overact endlessly, along with the rest of cast, Ao Li still managed to give a performance that impressed mightily with a solid, broad sound, mature, self-confident musicality, and voice that scaled to the smallish venue. Vocally, it was all natural and effortless.

Similarly impressive was bass Thomas Florio as Dulcamara, whose voice delivered true value, while Florio's music-hall-on-steroid performance coped well even with the misbegotten director's dictate. The wonderfully talented Abigail Santos Villalobos also put up with her ordeal, as a ceaselessly wiggling and mugging Giannetta; much, much less would have been mercifully more.

Bowie's direction (combined with the work of Erik Flatmo, credited as "Concept Designer") was beyond the ken with its half-baked ideas, inconsistently applied, and simply abandoned early in the performance, but then returning later ... and dropped.

The "concept" itself wasn't all that bad. Placing the action in World War II days when Fort Mason (where Cowell is located) was an embarkation point for the Pacific front, could have made sense of the soldiers' presence in L'elisir. Ulises Alcala's period costumes were certainly fun.

But I think there was an aspect to this production that may well persist into the future, when everything else will be forgotten. Years from now, when you hear Eleazar Rodriguez, Kevin Thompson, Kevin Ray, and other Merolini in leading roles, that will be the answer to the trivia question "where did they sing together in the chorus?"