And They Shall Be Called 'Nameless': Bootstrap Chamber Music 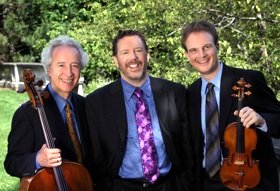 even have a name yet. Of such stuff are legends made — if all goes well.

Of course, fledgling and bootstrap and chamber music are redundant, but our Nameless takes the cake in the startup category.

Steven Reading, director of music at Novato United Methodist Church, recruited a few San Francisco Conservatory of Music students to play concerts. Reading had a useful ally in cellist Jean-Michel Fonteneau, founding member of the Ravel String Quartet, and chair of the Conservatory's chamber music program (which is celebrating its 25th birthday).

"I had a space," Reading says, "and he had students ready, willing, able, and in need of more performance opportunities. What we did not have was any money (what else is new?), or any idea of where or who our audience might be."

Expecting two or three dozen listeners, they had audiences of up to 80 at the initial fall concerts. Reading explains:

It has become a real grassroots effort, starting from the church members via their club and friends and family e-mails. Most of the audience are not church members, and most have had little or no contact with chamber or classical music (although we are now gaining more musicians and teachers in our audience, I have noticed).

We ask attendees to bring food for the Marin Food Bank as their admission, and no one is turned away.

For 2011, Nameless has big plans. Beginning in February, concerts will be held in historic St. Paul's 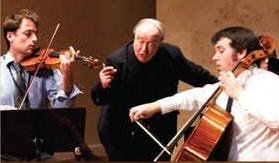 Episcopal Church in downtown San Rafael. In addition to fall programs of Mozart, Beethoven, Schumann, Smetana, Elgar, Ravel, and Britten, spring will offer Messiaen and works beyond what some may regard as Chamber Music Lite. Says Reading:

The enthusiasm of our audience and the Conservatory musicians has been a huge pleasure for me to host. This is the way chamber music should be presented ideally.

In a time of upheaval, shrinking budgets, failing organizations, some concerts of empty seats, and frustrated and worried promoters and musicians, something very positive is happening in Marin.

The phrase is from General Director David Gockley, quoted in an interview with The Toronto Star last 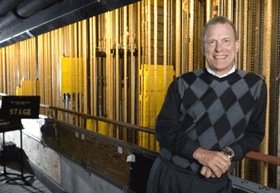 According to the man who previously put Houston Grand Opera on the map with a succession of world premieres, the San Francisco Opera will face its "moment of truth" in eight or nine months, when its contracts with the American Guild of Musical Artists and the American Federation of Musicians come up for renewal.

Simply put, producing opera in what the late newspaper columnist Herb Caen memorably called "Baghdad by the Bay" has become too expensive.

"John Adams wrote Nixon in China for an orchestra of 40," Gockley points out, "but our contract requires us to pay for 70 musicians. Unless we can address structural problems like this and lower our high fixed costs, we are going to be in trouble."

The message has not frightened the public as yet. Yes, cost cutting did rob the season of a production of Britten's Peter Grimes. But on a weekend of three operas [early in December] — Puccini's Madama Butterfly, Janáček’s The Makropulos Case, and Alfano's Cyrano de Bergerac — all three have been hard-ticket items.

The budget for the three 2011 summer Wagner Ring cycles is estimated at $23 million. The total includes the cost of the 2008 Das Rheingold, the 2010 Die Walküre, and this year's individual Siegfried and Götterdämmerung before the full cycles begin.

The collection is available in downloadable digital format from ClassicalArchives.com, and the CDs from the festival, Amazon.com, and other online digital music retailers.

Here are some brief excerpts from the season:

Concerts by and for the Young

Music-a-Thon, a 12-hour marathon concert by groups from the area's school, supports music education in the Mount Diablo School District. The concert is held in Ygnacio Valley High School, Jan. 15, from 10 a.m. to 10 p.m., and attendance is only $5 for adults, $3 for students; pledges are collected during the event.

Brief program items include music by Dvorák, Rimsky-Korsakov, Marquez, Ginastera, Sibelius, Richard Strauss, and Respighi. For the encore, 110 selected members of the six orchestras will play as the Festival Orchestra, under the direction of Young People Symphony Orchestra Music Director David Ramadanoff. Last

Philharmonia Baroque presents the second free student concert of the season, on Jan. 21 at 1 p.m., in Herbst Theater. In the Bach Concerto for Harpsichord in D Major, 15-year-old Hilda Huang is the soloist, the youngest ever with the Philharmonia.

Still an S.F. Conservatory student, Huang is also an aspiring conductor, having appeared in that capacity with the S.F. Chamber Orchestra, and is scheduled to lead the S.F. Bach Choir and Baroque Orchestra.

The Student Concert includes commentary by musicians about their instruments, plus demonstrations of the sounds of frogs, swans, and crows for the performance of Telemann's Alster Overture, which musically depicts a German lake.

Philharmonia's youth programs reach more than 25,000 students and adults each year. Its educational programs for the middle and secondary school levels include In-School Programs and a Mobile Mentor Program.

The Upside of the Arts Down Under

Not quite as badly as for most of the rest of the world, recession is also hitting Australia. But there is something unusual happening there. According to the Sydney Morning Herald, performing arts companies are reporting a rise in ticket sales.

The long-held wisdom that audiences no longer want to plan their arts calendar months ahead and subscribe also appears to be changing.

Subscription sales for next year's Opera Australia season are up about 5% on this time last year, with Carmen proving particularly popular.

"Swimmingly" was how a Sydney Festival spokeswoman described ticket sales for January's three-week event. Average ticket prices for the 2011 festival are lower than for the previous one but the big-ticket numbers have sold well, including The Giacomo Variations with John Malkovich and concerts by Sufjan Stevens and Emmylou Harris.

A Late, Great Review of D, Fr, and Gbpht

The writer is the San Francisco Opera Chorus' Tom Reed, and the names above refer to Aida, Radames, and 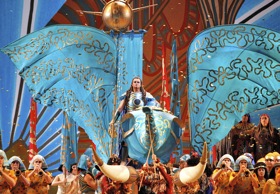 the Pharaoh, respectively. For this half-joke, half-research, Read has gone deep into the mysteries of the Rosetta Stone to present an authentic review of the S.F. Opera's season-closing Aida earlier this month.

It's a simple story, really, as would be expected of texts that had to be painstakingly chiseled into stone. D was an ancient slave girl who was in love with Rdms, the captain of the King's guard.

An Egyptian king would normally be referred to as "Fr" (Pharaoh), pronounced like quickly tearing a piece of paper. This would have been followed by the Pharaoh's proper name, but this particular pharaoh's name was problematic.

'How to Listen to Classical Music'

Led by the New York Times classical music writer Daniel J. Wakin, a three-week-long online course is being offered "in listening," Feb. 23 to March 15. The course is designed to help students recognize elements of classical music, but its subject is neither music theory nor music history.

Rather, it's a "joyful listening tour," the announcement says, with topics ranging from an overview of orchestra and chamber-music repertory to the role of conductor to Wakin's own "moments of bliss" in classical music. Registration is online.

The course is part of the New York Times Knowledge Network, which provides study courses delivered online, covering a variety of topics.

Will Hawking Be a Tenor? 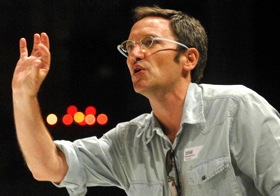 will mount a new opera for the Met based on Stephen Hawking's science best seller A Brief History of Time.

Here's an excerpt that I think calls for an aria:

Canadian author Alberto Manguel will write the libretto and Osvaldo Golijov will be the composer.

A statement from the Met allowed that an opera has been commissioned from Golijov to be produced in 2014, though no details were announced. A Brief History of Time, the opera? I'll believe it when I see it.

Jacques Pépin has appeared in a promo for his new show,Essential Pépin, along with Michael Tilson Thomas, the two performing Joseph Kosma's "Les Feuilles Mortes" ("Autumn Leaves"). MTT played the keyboard, prodding Pépin to accompany him with a whisk and a copper bowl. Take a look.
Back to top

Its 2010 season running February through May, Chamber Music San Francisco has been hibernating for 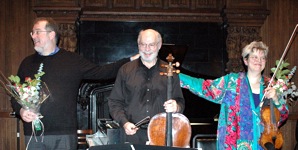 seven months. Dormant, but not gone.

CMSF Director Daniel Levenstein has just announced the 2011 season of nine concerts in San Francisco, with four of them repeated in Walnut Creek and Palo Alto, the two locations also featuring violinist Corey Cerovsek in May.

Season tickets are available now, single tickets go on sale Jan. 1. The Walnut Creek series is already sold out (there is a wait list).

The Borodin Quartet is 60 years old. One of its founding members, Valentin Berlinsky, was still playing when the Quartet last visited San Francisco a few years back. Berlinsky died two years ago, and his place was taken by Vladimir Balshin, who joined Andrei Abramenkov, Ruben Aharonian, and Igor Naidin in 2007.