Those First Steps to Classical Music 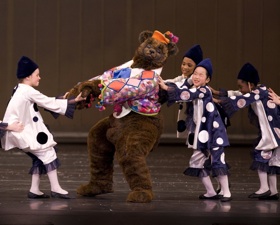 Here's a refreshing thought for those already fatigued of dancing sugarplums and waltzing flowers: There is something really important and lasting about what's behind all that hype and commercialism.

"What I like best about the Nutcracker is that it has a lot of pretty music," says Jiwon Baxter, 7.

She and zillions of young people — and a few middle-aged ones — had their first experience with both dance and classical music through various productions based on the Tchaikovsky score. (Mine was in Europe at age 8, and I still remember it: Swan Lake and Sleeping Beauty — both from the all-pervasive Russian.)

"I don't like the part about the Nutcracker and the Mouse King fighting," Jiwon says thoughtfully, "it is too scary. But I like it when Dr. Drosselmeyer does magic and turns the lights on. I like it when Clara and the Nutcracker go into the land of sweets and I like the twinkling snow fairies and the waltz of the flowers."

Marcus Weiss, 10, recalls his early youth (four long years ago) and his first Nutcracker: "The Snow Queen was so elegant, and watching children dancing around the giant Christmas tree — which grew and grew — was exciting. I remember the waltz music made me happy inside ..."

There is also the generational aspect, especially in San Francisco, where Nutcracker had its U.S. premiere in 1944. Casey Coonerty Protti, who danced at age 6 in Tandy Beal's "alternative production" in the early 1980s, now has plans for her own children:

Although by performing in it I was able to see how the production came together, every time I went on stage, without fail, I was transported to another place. They were among the most exciting moments of my young life. 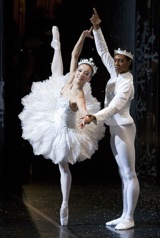 Now that I have two children, I actually daydream about the first time I can take them to the Nutcracker and get to see the magic fill their eyes. My daughter is turning 3 this winter and my son is just 4 months. I hope to take my eldest to see Nutcracker by the time she is 5 (she is already in ballet class!).

I'll probably go the whole nine yards — find her some black patent leather shoes and a velvet dress to wear. I really believe that going to the Nutcracker is one of those traditions that you pass along from generation to generation.

Hearing the music over and over again is one thing ... what if you conduct it night after night? San Francisco Ballet Music Director Martin West says:

Far from being a chore, conducting Tchaikovsky's astonishing score over and over is one of my true pleasures. Every year I am amazed how much there is still to discover in this masterpiece.

In the Classical Voice biographical essay, that "astonishing score" is named among the composer's "most ambitious, complex, and fully realized works," so it's really not a bad place to start a lifetime engagement with music.

Then there are children whose experience of Nutcracker leads to a dance career. Says ballet school student Dervla Carey Jones, 12:

I first performed Nutcracker two years ago as a clown. It was a great experience and fun to be on stage and performing. This year I will be a dragonfly. My favorite thing about Nutcracker is the part with all of the different cultures — I especially like the Spanish and Arabian dances.

Much further along that path, there is San Francisco Ballet soloist Frances Chung with her experience of the dancing sugarplums:

The first time I ever performed in a live show of Nutcracker was when I joined the Company in 2001. Since then, I've danced nearly all of the female roles in the production. My favorite role is Queen of the Snow; even though it's slightly dangerous and a lot can go wrong with the slippery snow on stage, it is the most magical experience. When the snow is falling on stage it really feels like Christmas!

The "snow" is made from shredded recycled paper that is swept up after each performance, run through a special machine with magnets (which captures stray bobby pins and the like), and then reused in the next show and the next. Still, it can be a problem; says a dancer: "It gets stuck in your fake eyelashes, and if you inhale it, you try very hard not to cough until getting off stage."
Back to top

A Hot Tip for a Cool Nut

The San Francisco Public Library and San Francisco Ballet are cosponsoring a free talk and movement workshop, and participation can net a free ticket to the S.F. Ballet Nutcracker — and those tickets are not easy to get (or pay for).

Parents and their children, ages 6-13, are invited to participate in movement workshops at the Main Library led by former San Francisco Ballet dancer Ikolo Griffin. He also will give an illustrated talk about the Company's Nutcracker.

Those who participate in the movement workshop and attend the talk will be eligible for one free ticket each to attend a performance in the War Memorial Opera House during December. A limit of four tickets will be given per family. 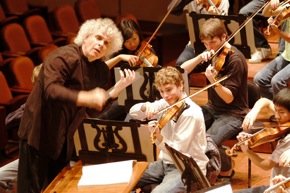 San Francisco Symphony PR Director Oliver Theil has posted photos on his blog that he took of last week's visit of the Berlin Philharmonic, and Simon Rattle's work with the SFS Youth Orchestra.

There is also a brief, impressive video excerpt from the rehearsal of Elgar's Enigma Variations on the site.

The Youth Orchestra next takes on the Prokofiev Peter and the Wolf, with Linda Ronstadt stepping into the shoes of Robin Williams, Bobby McFerrin, Rita Moreno, Leonard Nimoy, and many others as the narrator.

The Dec. 12-13 holiday concerts also feature generous excerpts from — as you might have suspected — the Nutcracker Suite, in addition to traditional Christmas fare.

The amazing new Disney Family Museum in the Presidio — a simple exterior and a whole other world inside, seductive enough to hold visitors for hours — has launched a chamber-music series in a new venue.

The Special Exhibition Hall, at 122 Riley Ave. in the Presidio, is just north of the museum. During Army days, it was used as a gym, but it's been cleaned up very nicely, made into a 140-seat performance space, and Museum Director Richard Benefield, a musician himself, vouches for the acoustics.

In the 4 p.m. concert series, the String Circle Quartet is featured next, on Dec. 12. The quartet consists of Joseph Edelberg, Anthony Martin, and Kati Kyme, violins, and Thalia Moore, cello.

There is separate admission to concerts, the museum, and the Christmas with Walt Disney film.

Pacific Musical Society's 99th annual gala will be held in the Fairmont Hotel on Dec. 14, "celebrating [Classical Voice founder] Robert Commanday, "his career, and his contributions to music in the greater Bay Area."

For reservations, see www.pacificmusical.com. A brief history of the Society is narrated by Sedge Thomson. This oldest active musical organization in the San Francisco Bay Area has been assisting young students with scholarship awards presented each year on a competitive basis.

Emily Bear was 2 when her concert pianist grandmother realized her talent. She is now 6, and her playing has been in evidence in concert halls and the White House. She plays everything from jazz on a talk show, to Carl Philipp Emanuel Bach's Solfeggietto.

Who Is Raising a Voice in Praise... and Why?

What is Black Friday for Bargain Hunting and Cyber Monday for online purchases — all by way of the holiday season — may well be Purple December for Choral Singing. Ever-timely Music News surveyed the multitudes about their holiday preferences.

What is your favorite music this time of year, we asked, and why ... but please keep it short.

For almost two decades my favorite Christmas musical experience has been singing Handel's Messiah with ABS. Each performance brings something new and exciting to this amazing work, which comes to life under Jeffrey Thomas' direction.

My favorite is Luca Marenzio's 16th-century madrigal "Qual mormorio soave" (That soft murmuring), with the text " ... the Virgin has concealed God within herself." It's part of our Christmas by the Bay CD.

Nilsson "I can't live without you" may not sound like a Christmas song, but it was played every year religiously in my family for as long as I can remember. I am the youngest of 6, and this song was certainly in the generation of my parents and older siblings. The rationale? We had what we called "talking lights" on our Christmas tree: Each light represented a different part of the harmonic spectrum, and this song had such a dramatic build up, that when Nilsson starts screaming "I CAN'T LIIIIIIVE ..." the tree lights just went wild.

Silent Night is so amazing when 300 voices of the Chorus and Chorus School sing it together. It's calming music, and shows the Chorus' family feel. Joy to the World has upbeat melody and joyous lyrics. 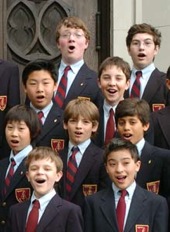 The famed boys' chorus will perform some of their favorite holidays songs at three concerts in December, the San Francisco event at Old First Church, at 4 p.m., Dec. 6. (See www.Ragazzi.org.)

I hate generic Christmas music, and try to stay away from large choruses or malls with Christmas elevator music. But my all-time favorite is Thomas Ades' Fayrfax Carol. I'm a sucker for English choral music.

Messiah is not specifically "Christmas music" but it's performed for the holidays around the world — and for good reason. Only the greatest masterworks remain fresh year after year; Handel's genius always shines through every performance.

I love performing Messiah annually. During the holiday season that becomes ever more about consumerism, I experience this oratorio as an extended musical meditation on life's journey: a tale of birth, growth, encounter with the divine, and service.

My favorite experience is recording What Sweeter Music with the American Bach Soloists. It was an eclectic mix of songs and a joyous experience. Seven years later, I still enjoy listening to the CD.

Founder/director of Clerestory a cappella ensemble

Hymn to the Virgin

My favorite Christmas choral piece is Benjamin Britten's Hymn to the Virgin. It's for two choirs, four parts each, one in English and one in Latin, singing a 12th-century hymn to Mary.

It Came Upon a Midnight Clear

This carol is especially meaningful seeing everyone fighting fatigue and sleepiness in church to celebrate midnight Mass. When the church bells ring at midnight and we start singing this beautiful hymn, the moment is magical.

A Ceremony of Carols

This masterpiece is mystical and ancient Marian poetry written in Middle English, set to the vibrant 20th century music of Benjamin Britten, in a wonderful contrast that sets the traditional Christmas texts on fire. 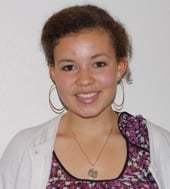 My dad compiles a CD of favorite Christmas music every year, and this song by Nat King Cole is always the first piece. I remember singing along with it even when I was really little.

I've been in love since my childhood with this masterpiece Benjamin Britten wrote in 1942 on an Atlantic journey. The piece feels as timeless as Santa Claus and yet as fresh as new-fallen snow.

Boisterous, celebratory, old English Wassail songs such as the Gloucestershire Wassail are favorites. They're all about raucous merry-making and toasting good health — a good way to end the year!

Anything new and challenging

Whatever challenging and exciting innovative music the Peninsula Women's Chorus is working on, such as Snowforms or the Zombola Ave Maria, because it expands the chorus, and there is nothing quite like the joint discovery of new sonorities and arriving at the point when we "get it."