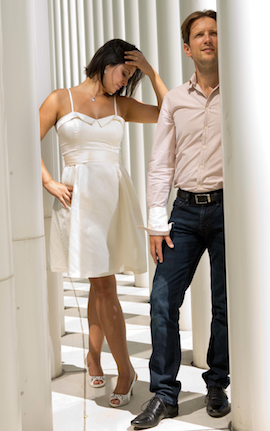 With its relatively small performance venue on Capp Street, San Francisco Community Music Center may have a problem accommodating the audience for a special (and free) event on March 16.

Coming from Paris, soprano Claudia Galli, accompanied by Grégory Moulin, will give a concert, part of their extensive U.S. recital tour, sponsored by the Luxembourg Music Export Office, in collaboration with the Consulate General of Luxembourg in San Francisco. (Yes, the Grand Duchy — of smaller population than San Francisco — has a music export office; why don't others?)

Galli and Moulin first met in the Paris National Opera's Young Artist Program seven years ago, and since then they had a close artistic relationship, performing in numerous recitals throughout Europe. Galli — born in Luxembourg to an Italian father and a Portuguese mother — sang many roles in Paris, performing at the Aix en Provence Festival last year.

Moulin, originally from the Drôme region of France, has worked as accompanist, pianist coach, and conductor. He has been conducting and coaching in some of the continent's major opera houses, including Munich, Salzburg, Madrid, and Berlin.

Meanwhile, check out the Community Music Center's calendar for many other events, including the Cypress String Quartet (March 1), Angela Hewitt (March 7), Robert Stallman (March 8), student recitals and workshops — all free. 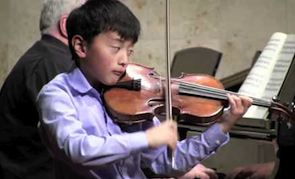 San Francisco's Alex Zhou, 12, whose young career has been chronicled in SFCV, is a finalist in the Menuhin Junior Division. He joins 41 other young violinists from 30 countries to compete for prizes before an international jury panel of acclaimed musicians. Follow the competition streamed live.

Last held in Beijing, the Menuhin Competition, the only violin competition held in a different country every two years, has set a new record by attracting 60% more entries this year from young competitors, ages 10 to 22.

Alex, who grew up in San Jose, and now studies at the San Francisco Conservatory, is an accomplished violinist and gifted pianist. He started playing the piano at age 5 and the violin at age 6. At age 8, Alex debuted at Carnegie Hall. Watch his performance of Bach's Partita No. 6.

San Francisco's Kevin Zhu, who won 1st prize in 2012 in Beijing at age 11, and who has since debuted in London with the Philharmonia Orchestra, performed at the opening concert of the Menuhin Competition in Austin last Friday, sharing the stage with this year’s jury members Olivier Charlier and Ilya Gringolts. 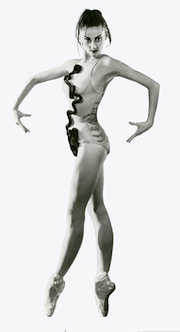 A balletic miracle will be on exhibit beginning March 21 at the Opera Plaza Cinemas, just a block away from the War Memorial where the San Francisco Ballet season is unfolding.

Afternoon of a Faun: Tanaquil Le Clercq brings back to life a legendary ballerina whose skyrocketing career was cut tragically short by polio, which paralyzed her at age 27.

Written and directed by Nancy Buirski, the documentary includes black-and-white films of Le Clercq in rehearsal and performance, with Jacques D'Amboise, of Afternoon of a Faun Jerome Robbins created for her.

"It is almost as though you are beholding mythological deities who have alighted briefly on the earth ... one of the great ballerinas of the 20th century," says The New York Times review.

Born in Paris in 1929, Le Clercq moved to New York at age 5 and began her ballet training. She caught the attention of ballet masters and choreographers in her early teens. Later she became Balanchine's fourth and last ballerina wife, 1952—1969. Although she remained paralyzed from the waist down until her death in 2000, Le Clercq re-emerged as a dance teacher and author, bearing her condition with grace.

One of her first roles with NYCB was at age 15, dancing with Balanchine in a sinister foreshadowing of what was to become reality a dozen years later: Balanchine choreographed the piece for a polio charity benefit, dancing a character named Polio, with Le Clercq as his victim. 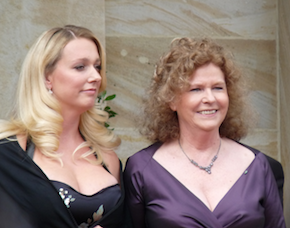 Eva Wagner-Pasquier, 68, great grand-daughter of Richard Wagner, will retire as co-director of the Bayreuth Festival next year. She currently runs the festival in uneasy collaboration with her much younger half-sister, Katharina Wagner, 36.

They were originally appointed in 2008, taking over from their father Wolfgang Wagner (1919-2010), and their contracts are scheduled to expire in September 2015, but Wagner-Pasquier says she will not have her contract extended. Nordbayerischer Kurier quotes her as saying: "I've asked the stakeholders to involve me as an advisor." She did not give any reasons why she no longer wanted to run the festival, the newspaper said.

Various websites and German publications have a field day speculating on what's going on behind the scenes. As Wagner-Pasquier would turn 70 at the time of contract renewal, it's possible that she just wants to retire — mostly, but not completely.

Wagner-Pasquier — married to the film producer Yves Pasquier — has had a storied career. In 1967 she became the personal assistant of her father, and was responsible for the casting in Patrice Chéreau's production of the Ring cycle in 1976. Outside the festival season, she assisted August Everding in London (Salome) and Otto Schenk at the Vienna State Opera (Don Carlos). In 1972 she joined the artistic management staff of the Vienna State Opera.

From 1973 to 1984 Wagner-Pasquier was an executive at Unitel Films in Munich where she oversaw more than 35 opera productions. From 1984 to 1987 she worked as an opera director at the Royal Opera House Covent Garden in London, and from 1989 to 1993 she was director of programming at the newly founded Opéra Bastille in Paris.

From 1993 to 1995 she was an artistic consultant at Houston Grand Opera, after which she worked in the same capacity at the Théatre du Châtelet in Paris from 1994 to 1998 as well as the new Teatro Real in Madrid with Stéphane Lissner from 1996 to 1997. Since 1996 Wagner-Pasquier has been senior artistic consultant to the New York Metropolitan Opera, and until 2009 artistic adviser of the Festival d'Aix-en-Provence and of the Académie européenne which is attached to the festival. She has been honored with the top order of France's Legion of Honor.

Eva is a delightful, spirited person who has held down casting director jobs at the ROH, Paris Opera and Aix-en-Provence. She had to be leaned on heavily to take the Bayreuth co-directorship, and finally accepted to keep it (the directorship) in the family. When I saw her in July she looked exhausted. The quality of the singing and conducting improved markedly during her time. The production decisions, spearheaded by her half-sister, were less successful. 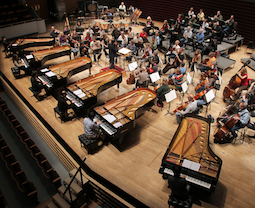 The report on the San Francisco Symphony's next season says one of the celebrations of Michael Tilson Thomas' 70 birthday "will have five prominent pianists — Emanuel Ax, Jeremy Denk, Marc-André Hamelin, Jean-Yves Thibaudet, and Yuja Wang — join MTT for a rare performance of Liszt's Hexameron for Six Pianos and Orchestra (Variations on the March from I Puritani)" on Jan. 15, 2015.

That is an impressive, prominent lineup, but can it rival the premiere of the performance? In 1837, in a benefit concert for the poor, Liszt engaged the most famous composer/pianists of the age, each of whom contributed a variation to the piece begun by Liszt: Frédéric Chopin, Carl Czerny, Henri Herz, Johann Peter Pixis, and Sigismond Thalberg.

The title refers to the Biblical six days of creation.

This Sunday, March 2, Academy Awards will be given out for music too, in two categories: 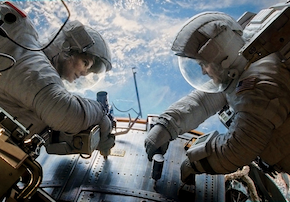 For all nominations and predictions, see The Los Angeles Times.

Alice Herz-Sommer, a renowned concert pianist who was believed to have been the world's oldest known Holocaust survivor, died in London on Sunday at the age of 110.

A documentary about her, The Lady in Number 6, is up for best short documentary at the Academy Awards on March 2. The Guardian reports:

She was born into a German-speaking Jewish family in Prague at a time when it was part of the Austro-Hungarian empire, and endured the city's ghetto following the Nazi invasion of Czechoslovakia. She then spent two years in Theresienstadt (Terezín) concentration camp, where nearly 35,000 prisoners perished.

In an extraordinary life, she counted Franz Kafka as a family friend when she was young and carried a devotion to music that sustained her in the camp.

She died in a hospital on Sunday morning after being admitted on Friday, according to her family. Her grandson, Ariel Sommer, said: "Alice Sommer passed away peacefully this morning with her family by her bedside.

"Much has been written about her, but to those of us who knew her best, she was our dear 'Gigi'. She loved us, laughed with us, and cherished music with us."