- It's one of the few foreign-language operas best left with its original title (similar to Puccini's The Bohemians, Verdi's The Troubadour, and even Korngold's The Dead City) because the English version is lame and meaningless: The Freeshooter. Say what? Tom Waits used Black Rider for his zany adaptation, and that's better, but no cigar. 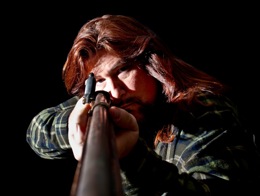 - It is a great German "national opera," a forerunner of Wagner. The plot begins with German folk legend and some of the songs long ago entered folk culture. The connection with Wagner will be the subject at the next meeting of the Wagner Society of Northern California at the Jewish Community Center of San Francisco on Feb. 13.

- You seldom see Der Freischütz in this country. San Francisco Opera has produced it exactly twice in 87 years, in the 1964 Spring Opera season, and then in 1985 — in connection with that year's Ring Cycle, as if to say: "this is what led to Wagner" (see point above). The quartet of Pilar Lorengar, Ruth Ann Swenson, William Johns, and Michael Devlin made for a fine casting; Heinrich Hollreiser conducted.

- It has a simplified-Faustian story; Max the hunter, who is in love with Agathe, must win a shooting contest to win her hand, so he uses magic bullets whose power comes from the Devil. The consequences are obvious and dire — but there may be hope at the end. We will not spoil it for you.

- On a strictly personal note: Although it is melodious and "pleasant," Der Freischütz is a bit monotonous, with its one big theme coming back over and over again, similarly to Wagner's "one-note" Rienzi. In opposition, Weberites/Wagnerites will point to the work's many riches.

West Bay Opera is very much in the "pro" camp, getting ready for its second production of the Weber opera in 20 years. Conducted by José Luis Moscovich and directed by Yuval Sharon, Der Freischütz is performed at the Lucie Stern Theatre, Feb. 19-28. Says Moscovich:

I love and revere this piece and I have assembled a cast that I believe will do justice to it. Ben Bongers as Max, Paula Goodman as Agathe, Peter Graham as Kaspar, Greg Stapp as the Hermit, and David Hodgson as Ottokar. 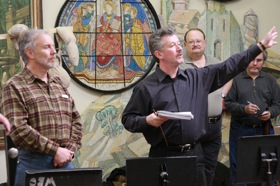 These are all singers that we have worked with over the years. Very exciting vocally, very committed musically and dramatically. I especially selected the chorus for this and I believe it will be strong.

It’s a truly outrageous score, loaded with dramatic opportunity, brilliant, strong, and nuanced. I am very much looking forward to conducting it, and hope to make at least some audience members into Freischütz fans by the time the curtain goes down.

What will be the distinctive elements of the WBO production? Moscovich says participation by Yannis Adoniou's KUST-STOFF dance company is an important factor, and he goes on to talk about the new, original subtitles being prepared for the production:

We’re doing this in German, with the dialogues, which have been shortened a bit, but not that much, because they are really necessary to tell the story. I found the translations provided in CD booklets and other readily available sources inadequate. This is an early Romantic score, and the German in the libretto is — perhaps intentionally in order to emphasize the feel of it as a fairy tale — even more convoluted syntactically and in every way than the norm.

As a result, I have encountered many instances where the available English translations barely make sense. The initial impulse had been to ensure that the English titles were accessible for the audience, but I quickly realized we needed it even more urgently for the cast to be on the same page about the contents of the drama itself. I decided to make my own English translation from the German. I collaborated with Lea Frey, our diction coach. 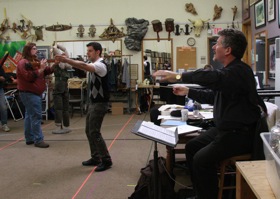 One interesting example: In the Wolf’s Glen scene, Kaspar is about to teach Max how to make magic bullets. He wants to convey to Max that this business won’t be easy. "Umsonst ist der Tod," he says. Then he explains that the forces of nature don’t yield their secrets without a fight. It had been translated as “Death is pointless” and other nonsense. "Umsonst" in this instance actually means free of charge. It’s a somewhat archaic usage, but not that obscure. The point of the line: "Death is the only thing you get for free (eventually); for everything else, you gotta work hard." Quite sarcastic, very easy to grasp, quite in character for Kaspar, and very German.

San Francisco Opera's world premiere production of the Stewart Wallace/Amy Tan The Bonesetter's Daughter is the subject of a documentary by Monica Lam. A work-in-progress screening will be part of the upcoming San Francisco Asian American Film Festival (March 11-21). Details will be announced later this month.

Norman Lebrecht reports in Bloomberg Press that Lang Lang, 27, has signed with Sony Classical for $3 million:

At the rarified Deutsche Grammophon, which shelters such media-averse pianists as Martha Argerich, Maurizio Pollini, and Krystian Zimerman; Lang Lang’s noisy populism was never an easy fit. When he demanded the dismissal of Yundi Li, the first Chinese winner of the International Fryderyk Chopin Piano Competition, the label acquiesced immediately, according to a dissenting producer. (Yundi Li has put a softer spin on his departure.) Lang Lang was the one artist no label could afford to lose.

So when Sony rebooted its classical wing last April after a long dormancy, the new chief Bogdan Roscic was given an open checkbook and told: "Get Lang Lang." 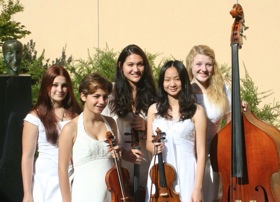 San Domenico School's Orchestra da Camera is competing in the 2010 National Orchestra Festival, sponsored by the American String Teachers Association, in Santa Clara, Feb. 18-20. This will mark the third time in six years that the teenage musicians have been invited to compete.

After taking home trophies for both "First Place High School Orchestra" and the festival's "Grand Champion" at their last appearance in 2008, and a first place high school orchestra trophy in 2005, George Thomson's orchestra is hoping for more honors.

Students also attend master classes where they will perform for and listen to fellow student musicians from other participating orchestras from around the country. The Orchestra da Camera's public competition performance will take place at 2 p.m. on Feb. 19, in the Grand Ballroom at the Santa Clara Convention Center.

Before they depart, the students perform a "Bon Voyage" concert at their home venue at San Domenico School, previewing the material that they will be competing with at the festival. "Shostakovich at San Domenico" will be presented on Feb. 7 at 3 p.m. in the Hall of the Arts at San Domenico School in San Anselmo. Admission is free (donation suggested). Seats may be reserved in advance by calling (415) 258-1921. 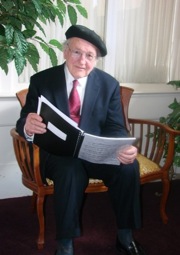 Butterfly Lovers on the Horizon 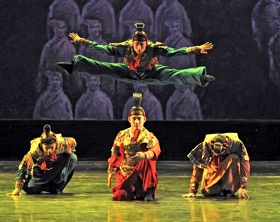 The Feb. 16-17 arrival of the Beijing Dance Academy's Butterfly Lovers at the San Francisco Palace of Fine Arts reminds me of the committee-composed 1969 Yellow River Piano Concerto, and the much more recent (2006), not quite as awful, First Emperor by Tan Dun. Popular "East-West-elevator music fusion" pieces rarely work out — but they can be quite pleasant.

More, it can be quite instructive to witness such items as a clear, unmistakable orchestral quote from Turandot in the second act of First Emperor, just before the final "anthem." Here is a "real Chinese" composer paying tribute to the greatest pseudo-Oriental composer of them all, in perhaps the finest musical double-reverse since Yellow River and its "tribute" to Tchaikovsky.

The Butterfly Lovers is a 17th-century Chinese story about a couple and their forbidden love. Set in Hangzhou, southwest of Shanghai, the story is about the only daughter of a rich provincial lord, who is disguised as a boy in order to get an education. (Think Barbra Streisand  as Yentl or Lisa Simpson as Jake Boyman.) At school, Zhu Yingtai falls in love with Liang Shanbo, a poor boy, and her parents oppose the affair. Cue Romeo and Juliet, but add a happy ending as the pair of suicides is transformed into butterflies to dance side by side among the flowers.

The 1958 Violin Concerto, by Gang Chen and Zhanhao He, is one of China's favorite "fusion pieces," which sounds more Western than Chinese, offering very large gestures, bearing some resemblance to early Andrew Lloyd Webber.

The Dance Academy's program will present Zhang Jianmin's choreography of The Butterfly Lovers on the second half of the evening; the first is taken up by Singing of the Wind and Emperor Qin Shihuang Calls on Troops. The latter was inspired by the terracotta warriors of Qin Dynasty; it won first prize at the Beijing Dance Competition.

Opening night, on Sept. 23, will have Jennifer Koh as the soloist in both the Adams and Beethoven violin concertos.

For the first commission of her tenure, Carneiro has chosen 36-year-old Mexican composer Chapela for a world premiere to be performed on Dec. 2. That program will also 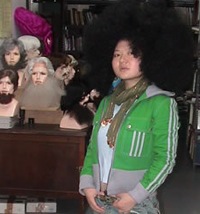 On Jan. 20, 2011, the second world premiere of the season will be a yet unnamed work by Du Yun, an alumna of Shanghai Conservatory, Oberlin Conservatory, and Harvard University, and variously described as "hip" and "emerging." Messiaen's Oiseaux exotiques (Exotic birds) and Beethoven's Symphony No. 6 complete the lineup.

In addition, Carneiro and the members of the orchestra will work with a new class of Emerging Composers in Residence as part of Berkeley Symphony’s Under Construction new-music series, on Jan. 16 and March 13, 2011, at St. John’s Presbyterian Church of Berkeley. See the Berkeley Symphony Web site for application guidelines. The 2011 schedule for Berkeley Akademie, a program of Berkeley Symphony founded in 2007, will be announced separately.

The current season continues next week, on Feb. 11, in Zellerbach Hall, with works by Beethoven, Esa-Pekka Salonen, and Berkeley composer Paul Dresher.

With these three awards the SFS’s Mahler cycle has now received a total of seven Grammy awards.

Music to the Ears: 'Tut for Free'

Suppose you want to see Tutankhamun and the Golden Age of the Pharaohs at the de Young Museum. Suppose also there are two adults, one senior, and one youth (between 6 and 17 years of age) in your party. The cost, including "convenience fee," will be $112. 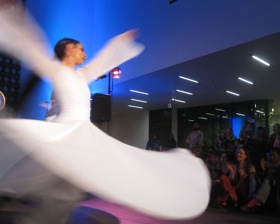 Now suppose the same foursome goes on Feb. 20 or 21. The cost: zero. And, on top of that: free activities, performances, and Tut-related films all over the place (see below). How can that be?

This is the free Tut weekend, sponsored by Target Stores. It's one heck of a bargain, but here's a word to the wise (or even to the not entirely dense): Lines will be long. The rest of the Tut exhibit, ongoing for a year now, has been amazingly convenient and comfortable because of the museum's system of timed entrances — you select the date and time, and only a limited number of visitors are admitted.

Admission will be timed on Feb. 20-21, but the line for tickets ... that's another story. Tickets are first-come, first-served, with a limit of four tickets per adult. The box office will open at 8:30 a.m. on both days.

Special events during the weekend — available in the sections of the museum always available free of charge — include children's art making, fortune tellers, tarot card readers, belly and sword dancers, and a DJ spinning in Wilsey Court, as well as a festival of mummy movies screened from noon to 5 p.m. at the Koret Auditorium.