S.F. Symphony Ramps Up to Its Centennial 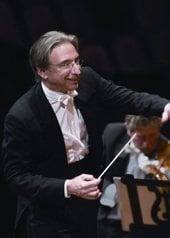 The San Francisco Symphony, born in December 1911, is turning 99 next season (which runs from Sept. 2010 to June 2011), a rare accomplishment in the tough business of orchestral music.

True, there are much older organizations, such as the Dresden Staatskapelle, founded in 1548; the Leipzig Gewandhaus (last month's visitor to Davies Symphony Hall), begun in 1743; or even the New York Philharmonic, started in 1842. Still, San Francisco Symphony will celebrate its centennial-minus-one next season with (a somewhat restrained) gusto, probably saving up for a big centenary 2011-2012.

The 2010-2011 season announcement today from Music Director Michael Tilson Thomas tells of a jazzy gala opening on Sept. 7, with soprano Jessye Norman singing such Duke Ellington favorites as Sophisticated Lady and It Don't Mean a Thing, as well as Copland's In the Beginning. Suite No. 2 from Ravel’s Daphnis et Chloé is also on the program.

happens to be on tap this month as well, both at Davies Hall and on the orchestra's tour — with soprano Karina Gauvin and mezzo-soprano Sasha Cooke as soloists. With the addition of Symphony No. 5, the four works will be part of two "Mahler in Europe" tours, observing the 150th anniversary of Mahler’s birth in 2010, and the 100th year of his death in 2011.

Classical repertory will be well represented, with 14 Beethoven performances, including two all-Beethoven concerts (Jan. 20-23 and Feb. 2-5), and an all-Beethoven program with the Mutter-Bashmet-Harrell Trio (Nov. 7). There are all-Mozart (Feb. 17-19) and all-Mendelssohn (March 10-12) concerts, and even Beethoven's Symphony No. 7 and Dvořák's Symphony No. 9, both performed by the Gewandhaus Orchestra just last week. 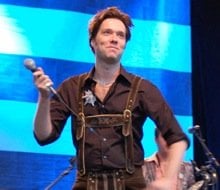 Visiting orchestras are the Dresden Staatskapelle, with conductor yet to be announced (Beethoven and Brahms), Oct. 24; Israel Philharmonic, with Zubin Mehta (Haydn and Mahler), Feb. 27 and 28; National Orchestra of Spain, with Josep Pons (Falla, Joan Albert Amargós, Stravinsky, and Ravel); April 10; St. Petersburg Philharmonic, with Yuri Temirkanov (Shostakovich and Brahms), March 27 and 28.

On the more contemporary front, Project San Francisco continues, with two weeks in December spotlighting the works of John Adams, including El Niño and Harmonielehre mentioned above. (Adams also has the "Creative Chair" post with the Los Angeles Philharmonic next season.) In June, 2011, Project San Francisco will feature pianist Yuja Wang, performing Bartók’s Piano Concerto No. 2, and participating in chamber music and student events.

Of the only two SFS commissions/world premieres, one — Rufus Wainwright's Five Shakespeare Sonnets — is postponed from the current season. The other is Avner Dorman's Uriah, to be conducted by David Robertson, Jan. 26-28. 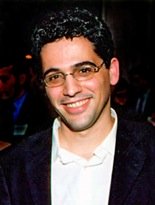 How does the S.F. Symphony, operating on a $63.5 million annual budget, compare with other orchestras?

California Symphony and OEBS are yet to make their season announcements.

MTT Honored With Medal of Arts

"Thomas has been a remarkable mentor and supporter to many young artists, and he has educated millions about the joy of music. His tenure at the San Francisco

Symphony has been marked by artistic excellence," Pelosi said.

San Francisco Symphony Board President John Goldman said: "This award is the nation's highest honor for artistic achievement, recognizing MTT's meaningful and lasting contributions to American culture as a musician, educator, and leader."

From composer Elliott Carter, in 1985, to the José Limón Dance Foundation two years ago, more than 200 American artists have been honored by the medal.

Pelosi quoted President John F. Kennedy: "The life of the arts - far from being an interruption in the life of a nation - is very close to the center of a nation's purpose," adding "As we recognize Michael Tilson Thomas and other artists, we honor them for enriching our lives, our country, and our world with their creativity."

'From the Sun King's iPod'

There they go again, instigating ancient music among the young! 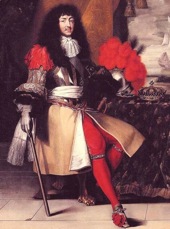 Nicholas McGegan's merry men/women of the Philharmonia Baroque are giving low-cost and even free school concerts next week with the intriguing title of "From the Sun King's iPod." Surely, the expectation is for posters of Lully replacing those of Justin Bieber in teen bedrooms.

Conducted by Jordi Savall, members of the Philharmonia present an hour-long program of the French Baroque from the reign of Louis XIV, the Sun King, at the orchestra's free Student Concert (11:30 a.m. on March 5 at Herbst Theatre) and low-cost Family Concert (3 p.m. on March 7 in Berkeley’s First Congregational Church). Rachael Myrow, of KQED, is host/MC.

At the Herbst concert, 700 students are expected to attend from participating schools, which have handled the arrangements. For Berkeley, tickets are $7.50 for children and $15 for adults from City Box Office. 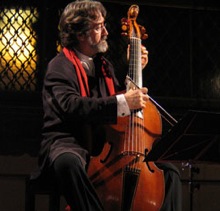 The events are the brainchild of Philharmonia violinist/violist Lisa Grodin, a Philharmonia player, who was appointed last December as the ensemble's director of education. Grodin is music director at The Crowden School and taught at both Crowden and U.C. Berkeley’s Young Musicians Program for many years.

She explains, thoughtfully, that while Sunny King Louis (1643-1715) had to do without an iPod, he did have the luxury of an orchestra to play whatever he wanted whenever he commanded and the Philharmonia will explore the music that may have been on his playlist. The musicians will be available after the concerts for questions and instrument demonstrations.

Savall's "regular" concerts, under the less provocative title of "The French Suite in Europe," will feature music by Dumanoir, Lully, Telemann, and Handel.

"Monday, Feb. 22, is Frédéric Chopin's 200th birthday. That is, it's Fryderyk Chopin's birthday; the Polish-born, Paris-dwelling composer's name is more commonly spelled these days with Ys," writes Anne Midgette in The Washington Post.

Even 200 years after his birth, things that appear simple about Chopin are actually more complicated than they seem, Midgette writes. Read the article about the man and his music.

Virtuosi Are As Virtuosi Do 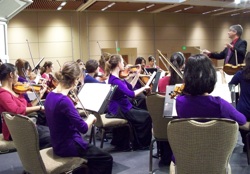 The girls from San Anselmo won, over 16 of the best middle school, high school, and youth orchestras from across the country. They were chosen by taped audition, to be evaluated by a panel of music educators.

Judged on technique, tone quality, intonation, rhythm, and interpretation, the Orchestra da Camera received scores of 97, 98, and 99 out of a possible 100 to win both the High School String Orchestra category and the overall "Grand Champion" award.

Judges praised the orchestra of just 20 players for its "absolutely lovely" phrasing and its attention to nuance and the "music that takes place in between the notes" in its performances of Respighi's Ancient Airs and Dances and the Shostakovich Chamber Symphony, Op. 110a.

As Grand Champion award winners, the orchestra presented a special concert for the convention on Saturday morning, earning a standing ovation from conference attendees and students from other participating orchestras.

This is the third such award for the Virtuoso Program, who were also Grand Champions at their two previous Festival appearances, in 2005 and 2008.

Says Thomson: "Among the more gratifying aspects of the Festival this time was that our competition performance — usually only attended by family, friends, and a smattering of spectators — was packed, with standees, even. The word was out that the girls from California were the group to hear."

The next Orchestra da Camera performance will be on May 21 in the Carol Franc Buck Hall of the Arts on the San Domenico campus in San Anselmo.

Smile When You Sing German 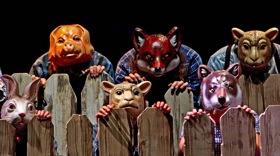 I heard outstanding German diction in José Luis Moscovich's production of the echt-German opera, Der Freischütz, at West Bay Opera, but it was fortuitous to find a more authentic, nay official, opinion.

It came from Peter Rothen, German Consul General to San Francisco (and the Northwest), who told Classical Voice: "I couldn't believe how in a production with American singers, German diction would be so excellent; I didn't even hear an accent!"

Rothen was also taken by the entire production, calling it a "great performance, the music was wonderful, I thought this cannot be normal, coming from a small company." (The German "nicht normal" can be both a condemnation and praise; in this case it's emphatically the latter.)

Moscovich, director Yuval Sharon, and diction coach Lea Frey have worked long and hard on the "proper German" for this German national opera, and they received high praise from native Germans in the audience, even a Berlin stage director who recently produced Der Freischütz there.

Says Moscovich, basking in the praise:

That was quite an effort, and we did it by investing our own time. (I picked Yuval, among other things because I knew he spoke good German too — you can't do this one by numbers.) And then there was Lea Frey, who just doesn't give up. We all gave the cast sheer hell, and taught them a few tricks as well, and made them sound as credible as you can get in four weeks. You might have noticed that Peter Graham (Kaspar) had a kind of wicked grin on his face every time he said the word "Kamerad" (which was quite a few times). Well, the grin worked well with the character (to his credit, he incorporated it and used it to his own advantage,) but the real reason was that I told him to grin because we you do, you can't purse your lips (which is what English speakers do to pronounce an r), the e sounds better too (not like KamArad) and what comes out sounds altogether more German. We did that kind of diagnostics and tech work with all of them, and even with the chorus.

Don Giovanni All Around

In addition to the current Berkeley Opera's production of the Mozart opera in El Cerrito, an HD video of the San Francisco Opera's 2007 performance (Donald Runnicles conducting; Mariusz Kwiecien in the title role) will be shown Feb. 27 and March 3 at Sundance Kabuki Cinemas, San Francisco.

Alec Baldwin ("the actor") is the New York Philharmonic's new official radio concert announcer, and when he was asked about his favorite performances, he said:

The Solti Mahler Ninth. Any Copland with Slatkin when he was in St. Louis. I like the Mahler cycle that Tilson Thomas did.

It's unusual for a school facility to be as complete and promising as the new El Cerrito Performing Arts Theater, now home to Berkeley Opera — ousted from cramped, antiquated Julia Morgan, which is to be used for "family-oriented entertainment." 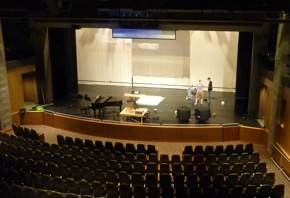 The theater is comfortable and good-looking. According to Mark Streshinsky, the new Berkeley Opera artistic director, "there is nothing like it in Northern California."

With the unfortunate misnomer of "continental seating" there are 439 seats downstairs (how is that better than 400 with aisle comfort?), and 167 seats in the balcony. It has a proscenium stage, with an orchestra pit. Great sightlines from anywhere in the house, and ample parking — it's even walking distance from BART.

The orchestra rows are well-raked, the front of the stage sinks to provide an orchestra pit. There is built-in video projection, good wheelchair spaces, even upstairs, and access from the audience to the stage. The lighting system is contemporary and complete.

One complaint (besides "continental seating"): the lobby is unacceptably small. During intermission of the sold-out premiere, there was elbow-to-elbow combat on the way to the (less than adequate) restrooms. Worse than Davies Symphony Hall, but not as bad as in Julia Morgan Theatre.

But the really important items: view of the full stage is good from everywhere. Acoustics are adequate from downstairs, better from the balcony. Berkeley Opera is lucky to have such a fine new facility. Sure beats being homeless or performing in tents.