If Musicians Ruled the World ... 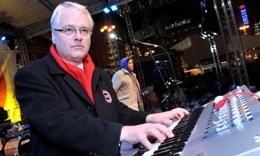 There it was, news over the weekend of the election victory of Ivo Josipovic, 52, for Croatia's presidency. He left politics in 1994 to pursue a law and music career, but returned seven years ago to lead the opposition Social Democrats.

A longtime president of the Zagreb Music Biennale, Josipovic is the author of 85 papers on legal matters and has written more than 45 compositions, some of them award-winning; he has performed in Croatia and abroad, and recorded on a dozen CDs. He also plays the piano and several other instruments.

Acclaimed for his integrity and clean record in a country dealing with corruption at the highest levels of government, Josipovic was also hailed as the "world's first composer to become head of state." 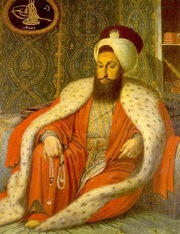 Not so fast. I've been a journalist long enough to know that claims of "first" are often unsupportable. And in this case, quick research turned up a whole lot of "musician-kings," even while ignoring Nero — and we will exclude that wretched fiddler (violist?). Here are some better examples from around the world, across time:

Liszt Concert by Another Hungarian

The San Francisco Bay Area Chapter of the American Liszt Society is sponsoring a free concert by the young Hungarian pianist Péter Tóth at 4 p.m. on Jan. 17. The venue is the Green Room of the War Memorial Building on Van Ness, and the program includes works by Schubert, Brahms, and ... Liszt. He will perform on a Fazioli piano brought in for the event.

Tóth made his American debut here three years ago, participating in a Liszt Festival. From a Music News item about him back then:

There is an intriguing story about Tóth. He was born in Békéscsaba, a small town three hours from Budapest, and he started playing the piano relatively late, at age 11. He won a scholarship to the Franz Liszt Academy in Budapest, and when his career took off (including a Grand Prix du Disque), he moved back home.

He still lives and practices in the same small apartment in Békéscsaba with his parents, brother, sister-in-law, and baby nephew. What's even stranger, in the manner of, say, Glenn Gould, is that Tóth regularly makes the six-hour round-trip commute to the Liszt Academy where he can practice on a good piano.

I hope to update the story during Tóth's visit here, trusting that he now has a good piano at home. Meanwhile, there is a YouTube video of his performance of the Rachmaninov Second Piano Concerto and the Tartini-Kreisler Corelli Variations, both back home, in Békéscsaba, and of the Liszt Funérailles in Fort Worth, Texas.
Back to top

The soloist in Aram Khachaturian's 1940 Violin Concerto is Armenian-Siberian Mikhail Simoyan, who made an acclaimed New York debut at Lincoln Center in 1999, at age 13. In addition to music by Edvard Mirzoyan (Symphony for Timpani and String Orchestra, 1962), Lazar Saryan (excerpts of Saryan's Panel Armenia, 1966), and Edgar Hovhannisyan (choral pieces to text by Parooyr Sevak), the program also includes Mozart's Symphony No. 40.

Patience in the Making 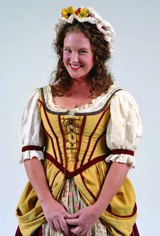 W.S. Gilbert and Arthur Sullivan would have enjoyed attending the rehearsal of their operetta Patience on Bryant Street Sunday evening. This is the home of The Lamplighters, the venerable San Francisco institution nearing the end of its sixth decade dispersing musical theater. (See a preview of the upcoming performances.)

The scene is right out of the quaint, offbeat, fertile brains of the Messrs. Gilbert & Sullivan. It's a combination office, costume storage space, and rehearsal studio, jam-packed with shelves of hats, Victorian gowns and uniforms, an orchestra, chorus, and soloists.

Presiding over the rehearsal are Music Director Baker Peoples and stage director Jane Erwin Hammett. They and the whole crowd of singers, musicians, and backstage personnel are happily bouncing along with Sullivan's effervescent, melodic music, reminiscent of Viennese operetta and Strauss waltzes. 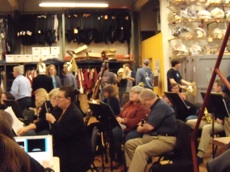 In the title role of Patience, "an unpretentious milkmaid," one of the Bay Area's most vibrant young sopranos, Jennifer Ashworth. (Her Candide Cunegonda was hailed in this column five years ago as "thrilling ... with a perfect vibrato, every note on the money," after outstanding performances as The Mikado Yum-Yum, and Pirates of Penzance Mabel.) She enters after the opening chorus of "Twenty lovesick maidens we," to proclaim "I cannot tell what this love may be."

Of the 20 maidens, Cary Ann Rosko and Rebecca Krouner (the latter making a promising Lamplighters debut) lead the way as Lady Angela and Lady Ella, respectively.

Also in the running: the entire 35th Dragoon Guards, formerly dear to the hearts of maidens all, now neglected in favor of poets precious.

How will the ladies and gentlemen pair off by the finale? We are not here to spoil the suspense, but can say, with conviction, that Patience is a true amaranthine, empyrean paragon — Victorian parlance, used generously in the opera, for something very, very good.

Contemporaries of Gilbert & Sullivan realized what they had in Patience immediately. When it opened in a small theater in London in 1881, it became instantly popular (eight songs encored on opening night), prompting the producers to move it to a newer, larger venue.

That was the Savoy, world's first theater lit by electricity, and the place giving its name to the Savoyards, performers and fans of Gilbert & Sullivan. Patience went on to 578 performance in the Savoy, an unusual accomplishment in those pre-Broadway blockbuster days.

Vienna State Opera Music Director Seiji Ozawa, 74, has been diagnosed with esophageal cancer and will cancel all concert engagements through June for medical treatment following his pending surgery.

"I am perfectly fine right now. I have no problems drinking or eating," he said at a news conference in Tokyo. A doctor who accompanied Ozawa said the cancer is in an early stage.

Ozawa led the San Francisco Symphony from 1969 to 1976, his tenure initially overlapping with that at the Boston Symphony (1973 through 2002). His contract in Vienna is expiring later this year; he will be succeeded by Franz Welser-Möst.

If you're still pondering the relationship between Stephen Sondheim and opera, kindly cease, desist, and join the celebration. The New York Philharmonic will present "Sondheim: The Birthday Concert" on March 15 and 16. 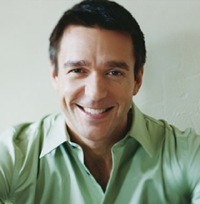 The celebration of the 80th birthday of the great Broadway and film composer/lyricist will include his most enduring orchestral music and songs — performed, in some cases, by the stars of the original Broadway cast productions — in addition to rarely heard material. Joining the celebration will be Michael Cerveris, Victoria Clark, Jason Danieley, Nathan Gunn (giving a recital tonight in Herbst Theatre), George Hearn, Patti LuPone, Marin Mazzie, Audra McDonald, Donna Murphy, Mandy Patinkin, Bernadette Peters, and others to be announced, including surprise guests.

Paul Gemignani, Sondheim's longtime collaborator, will conduct the New York Philharmonic; Lonny Price is the director; and Price and Matt Cowart are the producers.

The evenings will include songs and orchestral pieces from Sondheim's Company, Follies, A Little Night Music, Sweeney Todd, Merrily We Roll Along, Sunday in the Park with George, Passion, A Funny Thing Happened on the Way to the Forum, and Anyone Can Whistle, along with a suite from music he wrote for the film Reds, never before performed live.

Alexander Prior is 17 years old. He is the great-great-grandson of Constantine Stanislavsky, has completed four years at the St. Petersburg Conservatory, has conducted orchestras around the world, composed 40 symphonic works, was the composer-conductor for a BBC program series about young musicians. All this and more — at 17. Scary. 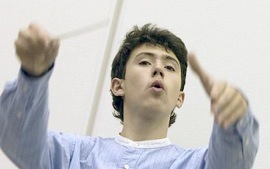 Seattle Symphony has just named Prior to a position with an awkward name and vague description, but the intent and wisdom of snatching the teen genius is clear and all to the good; wish San Francisco got him.

Prior will take a newly created Chairman's Fellow position, called Assistant to the Guest Conductors. The idea is to be a general "cover conductor," being prepared to step in at a moment’s notice if a guest conductor is unable to conduct a rehearsal or performance. In a less complicated world, the position would be called "assistant conductor." But, again, good for the Seattle Symphony.

Prior has been selected as one of 12 participants in next month's International Gustav Mahler Conducting Competition in Bamberg, Germany, the same competition in which Gustavo Dudamel first came to international prominence. Prior was runner-up in last year's Leeds Conductors Competition. His conducting engagements include an April 2010 performance with the Royal Philharmonic Orchestra at the Barbican in London, and a Conducting Fellowship at Tanglewood Music Festival during the 2010 festival.

Among Prior's compositions is the ballet Mowgli (based on Kipling's The Jungle Book), commissioned for the Moscow State Classical Ballet, and conducted by Prior. He was runner-up in the 2008 International Prokofiev Composers Competition and his Concerto for Piano and Orchestra No. 2, Northern Dances, was performed by the State Academic Symphony Orchestra of St. Petersburg.

Recent performances of his works include The Prince's Feast, performed by the National Symphony Orchestra at the Barbican (conducted by Prior), and the premiere of Svyatogor's Quest by the Sitkovetsky Piano Trio at Wigmore Hall. Prior recently received a commission to compose music, including a piano concerto, for a Franco-German film with an international cast.

Anthony Tommasini's Dec. 31 review of 2009 in The New York Times included this:

Since the death of Leonard Bernstein, the conductor Michael Tilson Thomas has been America’s most charismatic music teacher. In recent years, using his post as music director of the San Francisco Symphony Orchestra, he has taken his campaign to television and the Internet through the impressive Keeping Score programs.

A conference titled "After the Magic Flute" will be held at the UC Berkeley Music Department, March 5-7. In addition to lectures and panel discussions about the Mozart opera, the conference will offer screenings of rare stage productions and film adaptations. To register in advance, write to conference organizer Adeline Mueller, at [email protected]

Do You Whistle the Sets Leaving the Opera? 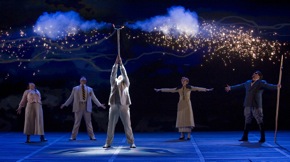 "The Washington National Opera's most compelling, dramatic offering of last year was presented with no sets, no costumes and very little fanfare," writes Anne Midgette in an article about the nature of operatic theatricality in The Washington Post.

"Even within the company, the two concert performances of Götterdämmerung in November were viewed in advance as something of an embarrassment, a sad reminder of the complete Ring cycle that should have been, but was postponed indefinitely because of financial constraints imposed by the recession — or simply by a long period of the company's living slightly beyond its means."

San Francisco Opera will have the same Francesca Zambello-directed Ring fully staged next year, and General Director David Gockley is consistently opposed to the idea of concert performances, but I find important and valuable points in Midgette's article:

Opera is a tremendously expensive art form; tens and hundreds of thousands of dollars go to creating the average new production. Creativity too often is equated with the bizarre: the kinds of weird excesses that have led Americans to brand much operatic direction on the Continent as "Eurotrash." Yet it doesn't have to be either bizarre or elaborate. True theater requires no more than an actor, and a voice, and an intention. "Sometimes you have to trust the music," [former San Francisco Opera official, now WNO Director of Artistic Operations Christina] Scheppelmann says.