A few personal picks from the many inviting local musical events of 2010. 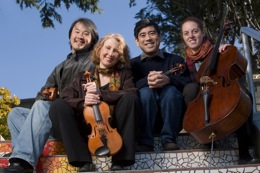 Del Sol's eclecticism is reflected in the quartet's next concert, in the Music at Meyer series in Temple Emanu-El on Jan. 11. The program of works by Béla Bartók, Gabriela Lena Frank, and Zhou Long has Hungarian, Latin American, and Chinese origins. Lou Harrison's Quartet Set is a veritable United Nations of music, with sounds of medieval Europe and Asia, from a peasant dance in France to Turkish court music.

That's Die schöne Müllerin, Schubert's legendary 1824 song cycle about a man's fervent and apparently hopeless love for a mill owner's daughter. The San Francisco Performances recital features baritone Nathan Gunn, much treasured in these parts for his appearance in the title role in San Francisco Opera's Billy Budd. The accompanist is Julie Gunn, the singer's wife.

The Illustrated Book of Invisible Stories 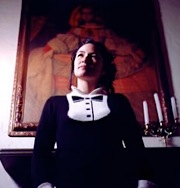 Choreographers Janice Garrett and Charles Moulton present encore performances of their hit 2009 premiere, which features 24 dancers, eight musicians, and singer-songwriter Odessa Chen. The unusual piece, described as a three-dimensional, "holographic book," is composed of episodes that "illuminate and investigate the human experience."

Morphoses from the Wheeldon Company

Christopher Wheeldon — called "one of the most important choreographers in the world" by The New York Times and movement director for the Metropolitan Opera's new production of Carmen — brings his Morphoses Company to the West Coast for the first time with a program that includes Continuum to music by Ligeti, and Rhapsody Fantaisie to keyboard works by Rachmaninov, along with other works. His Ghost will have its world premiere at the War Memorial Opera House, Feb. 9-20.

Being Plugged In at Sacramento 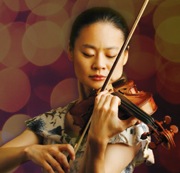 Day of Exploration with Midori 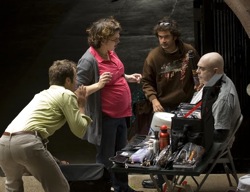 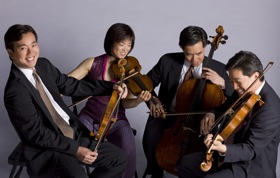 The Ying siblings (Timothy and Janet, violins; Phillip, viola; and David, cello) from Chicago formed the quartet 18 years ago, and they have toured the world since, performing in venues ranging from Carnegie Hall to schools and juvenile prisons. In 2009, Frank Huang succeeded Timothy Ying. They will play quartets by Haydn, Barber, and Dvorák at the Mansion. Preconcert talk at 6 p.m. with Kai Christiansen; reception with the artists follows the concert. Listen to recent recordings by the quartet.

Dancing to Prokofiev and the Andrews Sisters are on the menu for San Francisco Ballet's Program 2, which has a great musical-choreographic range, from Paul Taylor's classic Company B set to songs sung by the Andrews Sisters; to Jerome Robbins' Opus 19/The Dreamer to music by Prokofiev, and the world premiere of Christopher Wheeldon's Ghosts, to music by platinum recording artist Kip Winger.

Acclaimed Russian violinist Viktoria Mullova is the soloist in the Brahms Violin Concerto in D Major when the Philharmonia Baroque presents an all-Brahms concert titled "An Elegant Romance" in advance of Valentine's Day. Conducted by Nicholas McGegan, the concert — played on original 19th-century instruments — also includes the 1857 Brahms Serenade No. 1. 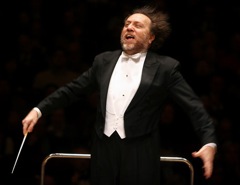 The Gewandhaus Orchestra was born in 1743 (as was Thomas Jefferson) during J.S. Bach's residence in Leipzig. Between birth and christening almost four decades went by before the orchestra gave its first concert in the city's then-new building for textile merchants or Gewandhaus in 1781. This is an old orchestra indeed, but only a kid in comparison with the world's oldest, neighboring Dresden's Staatskapelle, founded in 1548.

Conducted by Riccardo Chailly, and with the great Nelson Freire as soloist, the Gewandhaus will give two programs at Davies Symphony Hall, performing the music of Chopin, Dvořák, and Beethoven.

S.F. Symphony Year of the Tiger

Greeting the Chinese lunar new year, whose zodiac sign is the tiger, the San Francisco Symphony offers its 10th anniversary Chinese New Year concert and celebration. Those born in the Year of the Tiger are said to be "sensitive, given to deep thinking, capable of great sympathy, but also extremely short-tempered." The family event in Davies Hall features the music of East and West, blended with lion dancers, calligraphers, and partying.

Chamber Music's Cream of the Crop

Some of the principal players and top musicians of the San Francisco Symphony are participating in the orchestra's chamber-music series Sunday afternoons at Davies Symphony Hall. The Feb. 28 concert, of a Mozart String Quartet and the Brahms Clarinet Quintet, will have violinists Amy Hiraga, Melissa Kleinbart, Suzanne Leon, and Nadya Tichman; cellists Peter Wyrick and Amos Yang; clarinetist Carey Bell, among other participants.

Stanislaw Moniuszko is one of the best-known Polish opera composers, but he is rarely performed in the U.S. Pocket Opera's Donald Pippin to the rescue: Last season, he conducted Moniuszko's Haunted Manor, and this new year, Moniuszko's best, the 1848 Halka, is on tap. The lyrical, melodic work is about Helen, a highlander girl in love with Janusz, who abandons her to marry someone else. The story may not be original, but the music is.

A dozen schools in the Mt. Diablo Unified School District will take part in the Music-a-Thon to support music programs in the district's schools. The Mount Diablo Music Education Foundation is hosting the event 10 a.m. to 10 p.m. on Jan. 16 at Concord High School. 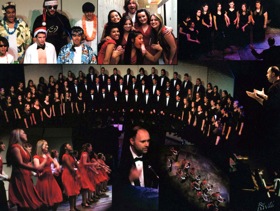 Music students will be collecting pledges on behalf of the performers and to support music education. Tickets for the event are $5 for adults and $3 for students. Donations will also be taken at the event.

Support for the school music programs, says the announcement, is critical since the 4th grade instrumental music program was eliminated in 2009. Because of the state's budget crisis, the School District will be forced to cut 5th grade music this year.

You Call This Jazz? Arrest That Man! 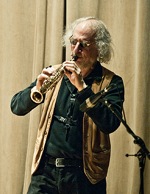 His offense? A listener complained that Ochs' performance was not proper jazz, and — so help me — "his doctor had warned it was 'psychologically inadvisable' for him to listen to anything that could be mistaken for mere contemporary music."

The strange twist in the story is that the angry jazz buff's complaint brought police to the scene of the Larry Ochs Sax and Drumming Core performance, where they listened, and agreed that the case should be passed on to a judge. Who needs music critics when the armed Civil Guard is on the scene?

The gentleman said this was not jazz and that he wanted his money back. He didn't get his money. After all, he knew exactly what group he was going to see, as their names were on the festival program.

The question of what constitutes jazz and what does not is obviously a subjective one, but not everything is New Orleans funeral music. Larry Ochs plays contemporary, creative jazz. He is a fine musician and very well-renowned.

Said Ochs: "I thought I had seen it all, but I was obviously mistaken. After this, I will at least have a story to tell my grandchildren."
Back to top

Shanghai Celebration at the Conservatory 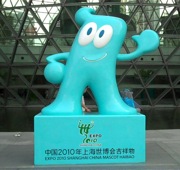 On the 30th anniversary of the signing of the first Chinese-American sister city agreement — between Shanghai and San Francisco — the music conservatories of the two cities will present a joint concert in the S.F. Conservatory.

The Shanghai Celebration will be a citywide series of events in San Francisco this year, including a major exhibit at the Asian Art Museum, Feb. 12 through Sept. 12. The year also marks the World Expo being held in Shanghai.

Vancouver Symphony has turned down a promising gig when it said no to playing at the opening ceremony of the Winter Olympics on Feb. 12. The reason: a request from the Games organizers to prerecord the music. 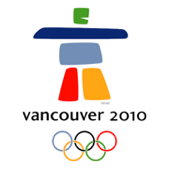 Symphony conductor Bramwell Tovey said the plan to have the prerecorded music mimed was "dishonest ... fraudulent."

Tovey compared the plan to Canadian sprinter Ben Johnson's situation at the 1988 Summer Olympics. Johnson was stripped of his gold medal in the 100-meter dash when he tested positive for a banned steroid.

The VSO will still have performances used throughout the Games, as it recorded all 98 national anthems that could be played during medal ceremonies.

Taking the Fight Out of the Symphony (Hall)

If you're heading to Atlanta's Symphony Hall for the Jan. 16 ultimate fighting event scheduled there, consider attending a peaceful chamber music concert closer to home. You see, the planned Sin City Fight Club show in Symphony Hall — advertised as turning from "violins to violence" in no-holds-barred fights taking place in giant cages — was canceled. No reason given.

Symphony Hall officials were unavailable for comment because offices were closed last week for a "mandatory furlough," according to the answering machine.

"Brawl at Symphony Hall Canceled" shouts the headline at the Club Web site. The organization blames complaints from angry Symphony patrons, and it whimpers about being "banned."

Local angle: kickboxing in the War Memorial Opera House? Hmmmmm. Could be a whole new source of income.

World Premiere Requiem on the Web

When the Radio France Chorus and Philharmonic Orchestra present the world premiere of Thierry Lancino's Requiem on Jan. 8, it will be broadcast live.

The work has been commissioned by the Koussevitsky Music Foundation in the Library of Congress, in conjunction with the French Ministry of Culture and Radio France.

The Requiem bridges the origins of earthly existence and immortality in a collision of time and space. This work is both an epic fresco and sacred ceremony. At the moment humans began the ritual of mourning their dead, they entered a new dimension. In doing so, they were driven to imagine what is to come after death, hence the existence of deities. Without the help of a deity, one might not be able to die completely, but, instead, be condemned to wander indefinitely without eternal rest. Human finitude is a terrifying thought, but would not eternity be an infinitely more terrifying thought?

The soloists for the world premiere are soprano Heidi Grant Murphy, mezzo Nora Gubisch, tenor Stuart Skelton, and bass Nicolas Courjal. The conductor is Eliahu Inbal and the choir director Matthias Brauer.
Back to top