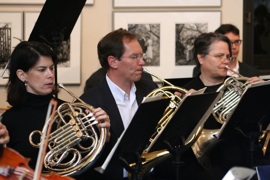 Laurie Cohen's Mill Valley Philharmonic has been performing free concerts year-round for a decade now. Unlike many other organizations that have fundraising frequently (yes, KQED, this is about you), MVP holds one such event each year, and doesn't tie up the airwaves. More about that a little later; for now, let's look at this wondrous institution.

The Philharmonic is about what its slogan rightly acclaims: "bringing free, live orchestral music to people in their own communities." That's just one side of the story; the other is who the musicmakers are.

Members of this community orchestra come from all walks of life — from housekeeper to astrophysicist, from student to senior. They not only perform standard works, but venture into innovative programming, even world premieres.

The principal strings receive a small stipend. If we engage local professional soloists, we pay them. We are also paying commissions, such as — with a matching grant from the San Francisco Foundation — for a world premiere symphony to be performed June 4-6. Composers of this Celebration Symphony are local musicians: Katrina Wreede, Moses Sedler, and Alexis Alrich. 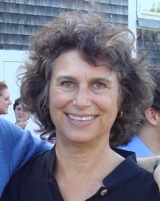 "There is an audience-education factor also in our work," Cohen says. "It is integral to our performances. History, musical context and orchestra demonstration are all popular features of our performances; we get many comments on how this brings the audience closer to the music we program."

So now to the fund-raising event: unseemly as it may be, the music for the concert is of the Beatles, Beach Boys, Talking Heads, Cyndi Lauper, Aretha Franklin, Stevie Wonder, the Police ... and more. A local rock band, The Answers, will participate. There will be a sing-along, but you don't have to.

San Francisco Boys Chorus will join The American Boychoir, of Princeton, N.J., for a joint concert on April 24 at Saints Peter and Paul Church in North Beach. Suggested donation is $20, and we'll bring you the program just as soon as it becomes available. Boys? 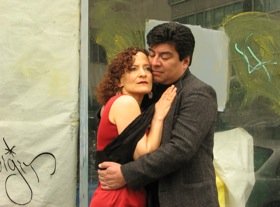 A private report from somebody not affiliated with the company:

I attended yesterday's final dress rehearsal and found myself weeping at the close. I have been fortunate to attend many Bohèmes over the decades and do not consider myself an "easy mark."

The intimate space is used wisely and all cast, conductor, and "pit musicians" are top-notch. I like to support the venues and output of "lesser" companies when they are top-notch. I assure you there is nothing "lesser" about this production sung in Italian, artfully using video screens for translation at appropriate time intervals.

A handful of people staged an unusual political demonstration outside Davies Symphony Hall Sunday and Monday evening when Valery Gergiev was conducting his visiting Mariinsky Orchestra from St. Petersburg. They were protesting Gergiev's frontline appearance during the Russian-Georgian conflict a couple of years ago, and — specifically — his performance of Shostakovich's music.

The Georgian sympathizers recalled the time when Gergiev rushed to Tskhinvali, the devastated capital of South Ossetia as soon as Russian troops "liberated" the town that was part of Georgia. 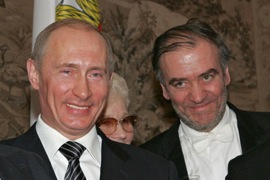 Declaring his Ossetian heritage and welcoming the Russian action, Gergiev conducted a program including Shostakovich's Symphony No. 7, the "Leningrad," which refers to the Nazi siege of that city during World War II.

Commented The New York Times back in 2008:

As if his selection of this hallowed music was not charged enough, Gergiev made it explicit. Tskhinvali "can be called a town hero," he said to the cameras, in fractured English. His point was clear: like Leningrad, the Ossetian capital had withstood ruthless aggression.

Gergiev’s music making was not just notes off a score: the conductor was riding the emotional wave of a common heritage — and echoing the exaggerated claims of Russian leaders that the Georgian shelling was a genocidal war crime.

Even those who criticized Georgia’s provocative adventurism and brutality wondered whether, in his use of the "Leningrad" Symphony, the conductor had lost his sense of proportion. Gergiev was caricatured as a flunky for Vladimir Putin, the Kremlin strongman who presumably was calling the shots in Georgia.

Gergiev and Putin have been friends since 1992, when Gergiev was artistic director of St. Petersburg’s Kirov Theater [now Mariinsky] and Putin the first deputy mayor of the city. "I don’t know of any case in musical history, except maybe for Wagner and mad King Ludwig of Bavaria, where a musician has been that close to a powerful ruler," Richard Morrison, the chief classical music critic of The Times of London, has said.

Dancing For and With Kids 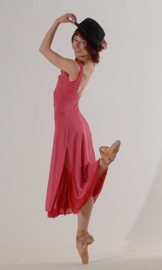 The PEEK Program has brought over 5,000 young people annually into contact with dance, both at performances and by taking dance into public schools. With an amazing figure of 65,000 mostly underserved schoolchildren involved in the past decade through the PEEK Theater Encounter Program — including hundreds of young children bused to Lesher Canter Center for the Arts to performances — Diablo Ballet and other arts organizations are stepping up to the challenge made more daunting every day during the state's budget crisis.

Ring: All the Gold in the Rhine

How expensive is it to produce Wagner's Der Ring des Nibelungen, the grand cycle coming to the San Francisco Opera? Let me count the ways. 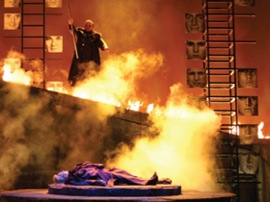 At the Los Angeles Opera, the cycle now in production cost a total of $32 million, with the following breakdown:

In San Francisco, the total estimate for all individual Ring performances and the three full cycles next year is $23.2 million, with these details:


No wonder the Opera is requiring financial contributions in return for seating priority — similar to the Met, Los Angeles Opera, and at European companies. Cycle packages in San Francisco range from Balcony Rear seats for $300 for the four operas ($60 tax-deductible) to Orchestra Premium at $2,300 ($1,120 deductible).
Back to top