It's startling, to learn that the Audio Engineering Society has been around long enough to have held its 129th convention in San Francisco last week. Not that AES is that old — it was established in 1948 — but it's that active. The Society has 14,000 members throughout the U.S., Latin America, Europe, Japan, and the Far East.

The convention discussed hundreds of topics, such as low-bit-rate audio coding, high-resolution downloads, electroacoustic enhancement systems, and the like. But what caught my attention was Bay Area tours offered to the visiting audio engineers.

Who knew what audio-rich tourist attractions there are in our neighborhood? From the AES brochure (which, curiously, doesn't mention acousticians responsible for these outstanding facilities) here are a few highlights:

- Freight & Salvage is a 42-year-old coffee house which recently opened California's largest venue for traditional music. Hosted artists such as Country Joe and The Fish, Lightin' Hopkins and Ricky Skaggs. 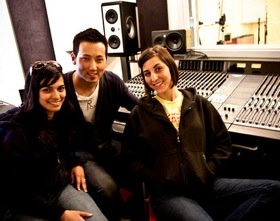 the past 40 years. The Berkeley Rep features two separate theaters which run different shows simultaneously. Situated across the street from each other in the heart of the Berkeley Arts District, Freight & Salvage and The Berkeley Rep are offered as a single tour.

- Women's Audio Mission is a nonprofit organization dedicated to the advancement of women in music production and the recording arts. In a field where women are chronically under-represented (less than 5 percent), WAM seeks to "change the face of sound" by providing women with hands-on media technology training, career counseling and job placement. The tour will be highlighted by a visit to WAM's recently redesigned studio. 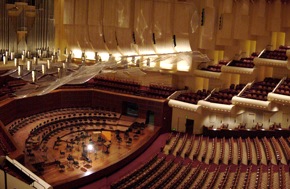 - Grace Cathedral, a renowned S.F. landmark, serves as a magnet, where diverse people gather to worship, celebrate, seek solace and learn. Recognized world-wide for its extraordinary acoustics, the Cathedral regularly presents a diverse program ranging from its Choir of Men and Boys to jazz legends like Pharoah Sanders, and hit makers like Carlos Santana and Bonnie Raitt. [An aside from this column: Along with the War Memorial GreenRoom, echo-chamber Grace Cathedral is my most unfavorite place for music.]

- Davies Symphony Hall opened in 1980, and is the home of the San Francisco Symphony and musical director Michael Tilson Thomas. The strikingly elegant hall is distinguished by a unique "cloud" of movable reflecting panels to adjust the acoustics to the size of the orchestra and audience. Unique fabric banners can alter reverb time from approximately one to two-and-one-half seconds.

It's one of many mnemonics for EGBDF, the lines of the treble clef. It is also the title of Thomas Stoppard's 1977 play, with music by André Previn. The play will be on a program presented jointly by Nicole 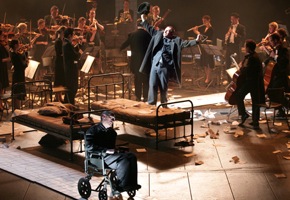 Paiement's BluePrint and the American Conservatory Theater, in the S.F. Conservatory Concert Hall, at 7 and 9 p.m. on Saturday, Nov. 20.

Additionally, the performances will include actors reading excerpts from the letters of dissident poet Vladimir Bukovsky, whose life and writing helped inspire the work, and Paiement conducting Lux aeterna, a 1997 work for violin and chamber ensemble by Uzbek composer Dmitri Yanov-Yanovsky; the soloist is Conservatory student Noémy Gagnon-Lafrenais.

An internationalized/politicized variation on the theme of One Flew Over the Cuckoo¹s Nest, EGBDF is about a dissident imprisoned in a Soviet mental hospital. He can hope for release only if he admits that his statements against the government were caused by a mental disorder. A.C.T.'s Giles Havergal directs.

This is the second collaboration of BluePrint with A.C.T., following last year's presentation of Stravinsky's and C.F. Ramuz' L¹Histoire du soldat. Says Paiement:

I am thrilled to collaborate one more time with stage director Giles Havergal on a rarely performed play for actors and orchestra. Neither a staged recitation nor an opera, this is a novel collaboration between an orchestra on stage and six actors. Stoppard's powerful play is richly enhanced by the orchestra¹s participation, creating characters, sets and lighting through musical textures.

The orchestra interacts with the actors similarly to an ancient Greek chorus, by turns illustrating the lunatic conductor's fantasy or standing in for society at large. The music has been described in terms of "tortured melodic jumps and passages of icily sparse scoring with a top line carried by a heaving growling bass," meant to convey "the frustrations and hysterically suppressed anger beyond the scope of dialogue."
Back to top

The organization EmSpace Dance will present the world premiere of A Hand in Desire, a dance-theater remix of Tennessee Williams' play A Streetcar Named Desire, Jan. 14-29, in Viracocha, 998 Valencia St., San Francisco.

Inspired by the poker games that recur throughout Williams' play, A Hand in Desire is structured, in part, as a game of chance: Each of its 52 scenes, of various lengths, is associated with a card. Some scenes will be performed every night; others will be drawn at random during every show. 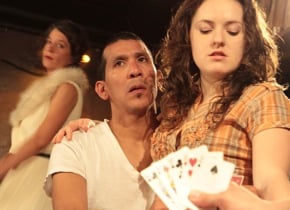 "It is a collaborative work," says EmSpace Dance Artistic Director Erin Mei-Ling Stuart. "It is also a site-specific work, and we are delighted to develop our ideas for Viracocha, which is far from a traditional theater space. With the audience seated at café tables in intimate proximity to the performers, Viracocha's basement will conjure a barroom atmosphere to match the booziness of the play."

A Hand in Desire is codirected by Erin Mei-Ling Stuart and Wolfgang Lancelot Wachalovsky, and choreographed by Stuart in collaboration with the cast. Composer Daveen DiGiacamo wrote the music and will perform live on piano and accordion, accompanied by other musicians. The multitalented performers are Natalie Greene, Peter Griggs, Kegan Marling, Rowena Richie, and Christopher W. White.

Members of San Francisco Opera Center's 2010 Adler Fellowship are always busy, but these days, it's crunch time for the young singers.

On Sunday, a quartet of them gave a concert in the Music at Kohl Mansion series: soprano Leah Crocetto, mezzo Maya Lahyani, tenor Brian Jagde, and baritone Austin Kness; John Churchwell accompanied them on 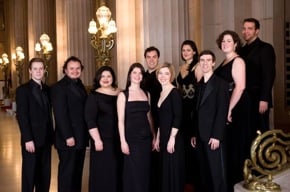 On Dec. 1, a raft of 10 singers will perform in the annual Future Is Now concert in Herbst Theatre, beginning at 7:30 p.m. A former Adler Fellow, Heidi Melton is scheduled for a Salon at the Rex recital the same day, originally at 6:30, but somebody at San Francisco Performances saw the light and moved the event to 6:00, so that the hour-long recital can end in time for the audience to shuffle over to Herbst.

Belongie, Biller, Crocetto, Gartland, Jagde, Lahyani, and Sanikidze have received 2011 Adler Fellowships and will begin an additional year in the program beginning in January.

On the 84th birthday of the late soprano Leonie Rysanek, Parterre.com is offering a 25-minute video digest of her performances over the years. Don't mind the video quality; instead, focus on the unique intensity and glory of what made Rysanek the prima donna for so many of us.

New Moon on the Silk Road

World dance ensemble Ballet Afsaneh presents New Moon on the Silk Road in Cowell Theater, Nov. 20-21. In a collaboration of 20 Bay Area dancers and musicians from the Central Asian and South Asian diaspora, this multidisciplinary performance includes percussive footwork and the precise spins of kathak.

Choreographed by Antonia Minnecola to music by Moses Sedler, another section of the program incorporates Persian contemporary poetry and song.

Sedler is a composer of music for concert stage, modern dance, and film. A concert cellist, recording artist, and teacher, he trained in classical music as well as explored the improvisatory music of many cultures, with influences of Indian classical music and Eastern European folk music.

No fewer than 33 U.S. opera companies will feature American operas over the next two season, according to an OPERA America survey, including nine world premieres.

"Over the last two decades, an American opera repertoire has become firmly established and American composers continue to have a tremendous impact on our art form," said Marc A. Scorca, president and CEO of OPERA America.

Cahill at the Rex

Beyond the precious few for whom the performance of contemporary music is a passion, there is Sarah Cahill. This most prominent star on the ultracontemporary classical music scene will give a Salon at the Rex piano recital, in San Francisco Performances' intimate chamber-music series, on Nov. 17.

She will also perform at Other Minds' events, including musical "séances," as reported in Classical Voice. And will both perform and preach new music on her KALW-FM radio show Then & Now every Sunday from 8:00 to:00 10 p.m. She can be heard on current and recent CDs from New Albion, Tzadik, CRI, New World, Albany, Cold Blue, and Artifact. 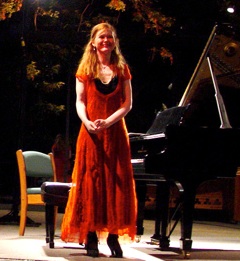 Pleasant and mild-mannered appearances notwithstanding, Cahill is an iron-willed, uncompromising Rambo in the pursuit of her cause: new music. That would be the kind of music San Francisco Symphony and most other big organizations shy away from, in unavoidable considerations of marketing and the bottom line.

Cahill is preparing to record Leo Ornstein, Marc Blitzstein, and Mamoru Fujieda. No Beethoven, no Brahms — tsk, tsk. The classics will pop up only indirectly at her Salon at the Rex recital:

"Along with Aleksandr Scriabin, Dane Rudhyar, and Ruth Crawford,” she says, “and possibly a bit of Erik Satie, I'm playing a few pieces 'channeled' by Rosemary Brown, the British housewife who was visited by great composers in the 1960s."

Brown had offered, as evidence of her contact with composers in the Great Beyond, hundreds of piano miniatures that she said Beethoven, Bach, and others had "dictated" to her. She described odd experiences, including shopping with Liszt who, she said, seemed interested in the price of bananas, and watching television with Chopin, who was appalled by British TV.

Cahill's interest in Brown is part of her whimsy, an unexpected counterpoint to her evangelical new-music dedication, something that’s appreciated and acclaimed by contemporary musicians.

One of Cahill's new projects, "A Sweeter Music," premiered in Hertz Hall in the Cal Performances series, with future performances at New Sounds Live at Merkin Hall and other venues across the country.

Broadcaster, producer, pianist, new music maven, mother, music performance curator at the Berkeley Museum, and writer (author of some important liner notes) — not to mention promoter of spiritual music by Scriabin, Rudhyar, and Seeger — Cahill reigns in the Bay Area as the unchallenged Queen of the New and Unusual.