San Francisco Opera will announce its 2011 fall season on Jan. 18, but as "this column" has done for many 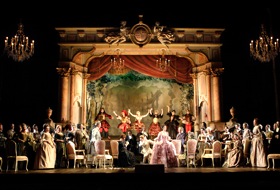 Being among the few serious opera fans with real affection for Cilea's best-known potboiler, not seen in London for a century (!), I was glad to see rave notices last week for Covent Garden's new production of Adriane Lecouvreur.

Consider The Wall Street Journal's notice: "the first-night crowd for David McVicar's version of Francesco Cilea's rare work applauded and bravoed each big number in the first of its four acts ... even more notable was that, as the (admittedly, complicated) drama grew more gripping, the same audience refrained from clapping until the end of each of the remaining acts. And at the end, even I violated the tacit code of the critic and shouted my hurrahs along with all those seated around me."

The Telegraph called it "a glamorous piece of old-fashioned romantic escapism, beautifully staged and eloquently sung. It provides a hugely enjoyable evening."

Coproducers are the opera companies of Barcelona, Vienna, Paris ... and San Francisco, so it's safe to 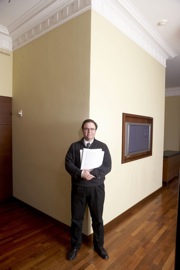 assume that this Adriana is coming our way, but perhaps not until 2012 or even later. What about next season, then?

Based on SFO General Director David Gockley's previous pronouncements and the composer's own Web site, the commissioned premiere of Christopher Theofanidis' Heart of a Soldier is a certainty for next fall at the War Memorial Opera House.

While Gockley was running Houston Grand Opera (and presenting a world premiere every blessed year), he coproduced John Adams' Nixon in China there for its 1987 world premiere. The Berkeley-resident/S.F. Symphony-affiliate composer's first big hit will finally be seen in the War Memorial, probably during the 2012 summer season, IF there is to be a summer season. ("No denying times is hard, sir, even harder than the worst pies in London. ...")

It's ironic that Nixon's first workshop performance took place in Herbst Theatre, next door to the Opera House, but the few yards between the two buildings took a trip around the globe and a quarter century to negotiate.

In the running for fall: a Music Director Nicola Luisotti–advocated Verdi rarity, Attila; Handel's Serse (seen in Berkeley a couple of weeks ago; why not coordinate regionally?), with the possible participation of Susan Graham and David Daniels; Turandot and Carmen to bring in the crowds — but no Madama Butterfly, as far as is known at this point.

What — no Janácek?! We must live on memories. Read on.

Even Elina Makropulos doesn't live forever, which is a real pity because Sunday's final performance of the 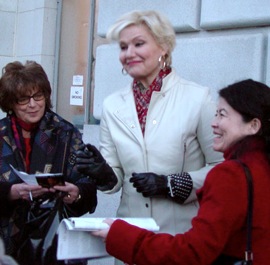 San Francisco Opera's magnificent production of Janácek's The Makropulos Case was something to remember, treasure, and difficult to part from.

Both Karita Mattila in the title role and the SFO Orchestra under Jirí Bélohlávek's direction had their most intense, overwhelming performance.

Bélohlávek's Janácek with this orchestra is the equivalent of Runnicles' Wagner and Britten, or Luisotti's Verdi and Puccini. As mentioned in the review of the first performance, Bélohlávek's powerful approach to the score is quite different from Charles Mackerras' transparent/translucent sound, but both are valid and outstanding in their interpretation.

From Bélohlávek, Miro Dvorsky (Gregor), and (German) Gerd Grochowski (Prus), one expected, and got, a "very Czech" sound in this quintessentially Czech work (especially in the finale). But the wonder of the Sunday performance was how Mattila, the orchestra, and everybody in the cast sounded as if all Brno-born. 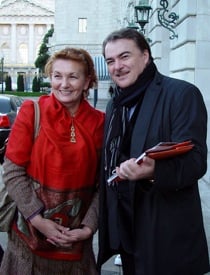 music, this time it finally became clear to me what I've been hearing in the main theme of the overture: It's "Johanna" from Sondheim’s Sweeney Todd, plain and simple.

This performance — indeed, this entire run — has been too marvelous to complain about minor things, but in this case SFO "has asked for it" ... and it's kind of funny anyway. Through the other five performances, large clocks on stage were showing the actual time, indicating the inevitability of non-Makropulos mortality.

In the press notes: "The large back-lit clocks for each act all have real working clock mechanisms." The passage of time was well indicated Sunday too, but no adjustment was made for the 2 p.m. matinee, so the march of time began at 8:09. Apparently, the clocks were consistently on the same time in order to ensure continuity for the video being shot, never mind the Sunday and (7:30 starting time) Wednesday audiences.

If I could, I'd reset the clocks to early November to hear these performances again.

George Cleve's Mozart Youth Camerata will give a free holiday concert on Dec. 5, at 7 p.m., in Berkeley City 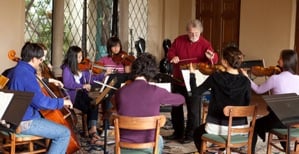 Club. An offshoot of the Midsummer Mozart Festival, the Camerata consists of musicians between ages 12 and 21.

On the program: excerpts from Mozart's Symphony No. 27, Bach's Double Concerto, and Mozart's Clarinet Quintet (by the College Preparatory School Quintet). Also performing is the Jupiter Chamber Players, presenting works by Iosif Andriasov, a composer and philosopher from Russia, of Armenian descent.

The Aulos Ensemble — an organization formed 37 years ago by five Juilliard graduates — is performing a program of French Baroque music to honor the holiday season, in the Music at Kohl Mansion series, on Dec. 12, at 7 p.m.

Preparing A Soldier's Tale in Berkeley

Aurora Theatre Company is collaborating with Tom Ross, Jonathan Khuner, and Muriel Maffre to develop a "reimagined production" of Stravinsky's L'Histoire du soldat, based on a new translation of the libretto and a new adaptation of the score.

The project will feature four musicians (piano, violin, clarinet, and percussion), three actors, two dancers/puppeteers, puppets (one life-size and one small), plus video elements. Former San Francisco Ballet dancer Maffre, who performed a concert version of the work with the Orcas Island Chamber Music Festival in Seattle, will serve as choreographer, dancer, and codirector of the workshop. Ross will also codirect, and Berkeley Opera's Khuner will serve as music director.

The workshop takes place at Aurora, in the company's new Dashow Wing performance space, Dec. 6-12, though it's not open to the public. Plans are to present the world premiere of the fully staged production as part of a future season, during the mainstage series, or as a special holiday presentation.

The University of Louisville's $100,000 Grawemeyer Award for Music Composition for 2011 has gone to 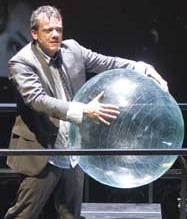 The announcement says the composer "uses Dante's epic poem as a springboard for subtle and ironic commentary on modern life, drawing a multilingual libretto from the Bible and other sources. Although some describe Andriessen's music as hard-edged, it is always human and humane."

Just before the Second World War, I was born in a sidestreet by a small canal in the medieval centre of Utrecht. Believe me, 71 years later, getting the world-famous Grawemeyer Award for La commedia seems to be completely unreal. How could this happen?

When I was 4 years old my father walked with me over the bridge of the canal to St. Catherine's Cathedral. In that church he played the organ and conducted the choir which twice a week included 40 boy trebles (girl sopranos were permitted only 25 years later). Did it all start sometime then? Perhaps it was hearing him play the organ when I started composing 10 years later (I simply began by imitating my father and my 14-year-older brother Jurriaan). My father taught me: "Don't think you are important, we are just worms, but we have the duty to serve the music and write as well as we can."

I am very grateful for the prize. Let us remember my wife Jeanette, who always provided valuable critical input about my compositions and supported me throughout the 50 years we lived together. She suffered a serious illness during the time I was working on La commedia and died before the first performance. The complete five-part score is dedicated to her.

La commedia is Andriessen's fourth opera, premiered at the Holland Festival in 2008. The same production was seen this spring in Walt Disney Concert Hall in Los Angeles and Carnegie Hall in New York.
Back to top

The good news is that the San Francisco restaurant Colosseo is now presenting Luca, an opera-singing waiter, during dinner. The weird news is that the city's Planning Commission had to take a vote (5-1) to make that happen. (Remember when Max's Opera Cafe had all its waiters — mostly music students — sing, taking turns? That and the attraction of the place are both gone.)

Against the majority on the commission stood Kathrin Moore, who said she was concerned that the permit could be interpreted to allow karaoke or excessively loud live music. There has been no discussion of the excessively loud recorded music used to stifle conversations in many an eating establishment.