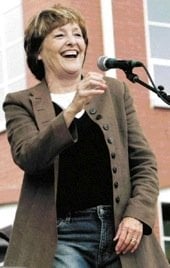 But how about musicians, especially young ones, who do well and do good, pretty much without public knowledge? For instance, what do you know about the San Francisco Conservatory’s Community Service program? Full disclosure: I’ve never heard of it. Which is the point of this item.

In a note from California Convalescent Hospital Administrator Lorrie Lim about a fund-raising lunch for the famed old nursing home, I spotted a mention of “music by S.F. Conservatory students Justin Houchin and Ray Zhou” at the event. No more information was provided, so I contacted Sam Smith at the Conservatory administration, who pointed the way to Elisabeth Lowry, manager of the Community Service and Music to Go programs. The Community Service mission and accomplishments:

During the last school year, our students made 253 visits to such places. The 70 students in the program reached an audience of approximately 7,400 people. The students shared their music-making with appreciative audiences, and the direct, close contact gave them immediate gratification for their efforts.

Hundreds of thank-you notes have been sent in response to the Community Service students, who (not so

incidentally) get good practice in public performance. Here’s one note from the San Francisco Veterans Administration:

Lucas and Stephanie did an excellent job today. Aside from their musical skills, they were very engaging and professional in talking with our patients, answering questions about themselves and their instruments (and the Conservatory). Our patients loved the performance. The head of our Recreation Therapy department calls this the musical highlight of the year. We look forward to the next performance.

The affiliated Music to Go sends students to play or sing at weddings, parties, or corporate functions “at very affordable fees.”

Back to the hospital event, a low-key fund-raising lunch for programs at the nursing home, marking the 35th anniversary of Lim as administrator. After all that time doing hard, constant work, she is still the most bubbly, alive person I know. She has been so inseparable from her patients that she even held her wedding in the hospital.

The Human Side of a Recital 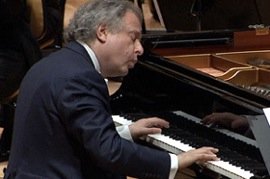 The audience at András Schiff’s splendid San Francisco Performances recital on Saturday heard only intense, searing performances of Mendelssohn and Schumann, and saw a focused, unsmiling artist at work.

What was known only to a few of Schiff’s many local friends is that he had planned to cancel the recital when receiving news about the death of his mother in Budapest in an accident at home just a few days ago.

Klari Schiff was 95. She and her husband were both survivors of concentration camps who married after the Holocaust. Schiff was only 4 years old when his father died of cancer, so his mother raised him.

In talking him into staying and performing, Schiff’s friends spoke about the healing effect of music. What listeners heard was music at its most intense and personal.

Music in and for a Beautiful Victorian

Architecture, historic preservation, and evenings of chamber music and jazz combine at benefit concerts in 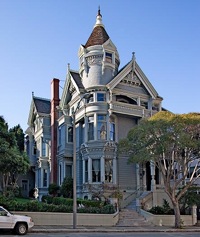 and for the Haas-Lilienthal House. One of the benefit concerts is today at 6:30 p.m. in the building, at 2007 Franklin St., San Francisco.

The Queen Anne–style Victorian, finished in 1886, is the only private home of the period that is open regularly as a museum, complete with authentic furniture and artifacts.

Preservation of the house, with its wooden gables and circular corner tower, is just one of the causes of San Francisco Architectural Heritage, a nonprofit organization located in the building.

“The idea,” says Constance Farrell, of Architectural Heritage, “is to bring local performers into this historic and intimate setting for a unique musical experience.” The events have a feeling of music in your living room, presuming you live in a gorgeous old house.

The concerts serve to raise awareness of the building, to promote the organization, and — in a modest way — to help with funding. Unlike the high price of most benefit events, Haas-Lilienthal tickets for concerts and reception cost only $25 for Heritage members, $30 for the general public.

The 40-year-old organization has carried on a successful campaign against demolition of historic buildings. Its Western Addition project, alone, made it possible to relocate a dozen buildings, saving them from destruction. Architectural Heritage is also responsible for the creation of a historic property inventory for The City, and is shortly to publish a splendid book, called Port City: The History and Transformation of the Port of San Francisco, 1848–2010, with which SFCV Associate Editor Mark Woodworth was recently involved.

The Oct. 19 concert features three well-known classical musicians in an unusual evening of tangos and 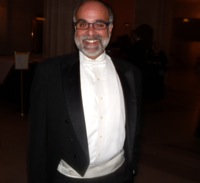 Miland, a member of the San Francisco Opera Orchestra since 1988 and a nationally recognized advocate and performer of contemporary music, says of the Haas-Lilienthal: “This wonderful home gives people an opportunity for a more intimate experience with the performers.”

The next event, on Nov. 16, will feature jazz acoustic bassist Marcus Shelby “and Friends,” yet to be named. Shelby is leader of the jazz orchestra, septet, and trio bearing his name.

Lemony Snicket’s The Composer Is Dead, commissioned and premiered by the San Francisco Symphony 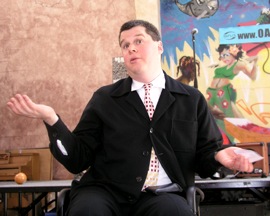 four years ago, will have a five-week run at Berkeley Repertory Theatre, Dec. 2 - Jan. 15.

Taccone, who is staging the show, says it’s one of the more ambitious works he has been involved with:

It combines live performance, film, puppets, and music. It’s a fun show for the whole family that unfolds in the ironic world of Lemony Snicket, a writer who is completely eccentric, wildly 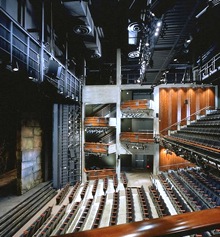 imaginative, and equal parts humor and smarts. I’m delighted to team up with Geoff Hoyle once again, and enjoying the challenge of working with puppets. As a director, you tell them what their motivation is and you get nothing but the same facial expressions. Fortunately, we have the brilliant folks from Phantom Limb to create the puppets as well as the sets and the costumes.

The Composer Is Dead will be performed in Berkeley Rep’s spectacular RODA Theater, whose builders — ELS Architecture and Urban Design, with acoustics by Charles M. Salter Associates — have created both a theater and a concert hall.
Back to top

It’s surprising to realize that Leonard Bernstein’s death occurred 20 years ago. It just doesn’t seem so 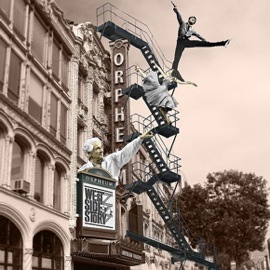 long ago that this great American musical icon was composing, conducting, speaking out for cultural and political causes: a vital, ever-present figure.

Coincidental with the anniversary, Bernstein’s West Side Story is coming to the Orpheum Theater, Oct. 27 - Nov. 28.

This is a new production, darker than what generations of audiences were used to from some of the Broadway revivals and the film version. Librettist Arthur Laurents’ Broadway direction is re-created for the tour by David Saint. The original Jerome Robbins choreography is now presented by Tony Award–nominee Joey McKneely (of The Boy From Oz and The Life).

KALW-FM, 91.7, is inaugurating a series of hour-long programs exploring the lyrics of Ira Gershwin, under the title I Love to Rhyme. Produced by KALW’s perennial host Alan Farley, with the cooperation of the Ira and Leonore Gershwin Trusts in San Francisco, the programs also have contributions from Gershwin biographer Philip Furia. Roman Mars reads excerpts from Gershwin’s book Lyrics on Several Occasions.

The first two programs will air at 10 p.m. on Oct. 22 and 29. The series will be produced at the rate of two or three programs per quarter. After looking at George and Ira’s major works together, Farley plans to spend at least one program on each of the composers other than George with whom Ira worked, including Kurt Weill, Aaron Copland, Jerome Kern, Arthur Schwartz, Harry Warren, Harold Arlen, Vernon Duke, and Burton Lane.

The programs are streamed live at KALW.org, and can be heard online on the KALW Local Music Player at KALW.org for one week following the initial broadcast.

Internationally renowned music critic Paul Moor died in Berlin on Oct. 11. He was 86, and had spent time in 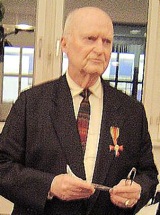 hospitals ever since a stroke in February 2009. The Texas-born, longtime Berlin resident lived and worked in San Francisco from 1981 to 1995.

Musical America and High Fidelity were the two major publications for which he wrote, but his work — about music and psychiatry — also appeared in newspapers and magazines, on several radio and TV stations, and in several books.

In 2004, Moor received Germany’s Federal Cross of Merit with Ribbon for his contributions to the state, one of the few to someone not born in that country. Representing the German president, State Secretary Barbara Kisseler told Moor:

You are being honored because during the more than 60 years of your artistic and journalistic activity you have succeeded as have few personalities in making the cultural accomplishments of our country known in the world.