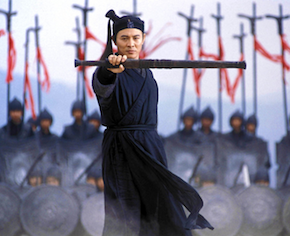 One of the most amazing scenes in all cinema is a sword fight in the rain against the strains of a guzheng — Chinese plucked zither — seen through a curtain of individual raindrops each in a bizarre closeup. That's just one of the hundreds of scenes in Christopher Doyle's stunning cinematography that help make Zhang Yimou's 2001 Hero a masterpiece.

Hero is about the first Chinese emperor (Qin Shi Huang, 259-210 BC) and the warrior (Jet Lee) who may or may not assassinate him. It is one of the great films of recent times — complex, gripping, with a fabulous cast, and an unforgettable soundtrack. As Yo-Yo Ma's cello solo resounds over the resplendent court, all elements come together in one overwhelming whole.

This entire epic wu xia (martial arts) story is a kind of visual music. Set on a huge scale, with incredible vistas, immense, operatic crowd scenes, and brilliant colors, Hero is grand musical theater of history and passion. It also has a depth of emotional, philosophical, and political substance, the conclusion representing a dramatic change in Zhang's stand on the vital issue of the individual versus the state.

The all-star cast (Jet Li, Tony Leung, Maggie Cheung, Zhang Ziyi, Donnie Yen and Chen Dao Ming as the Emperor) is seen against the background of grand palaces in Hangzhou, the natural reserve of Jiuzhaigou (with the Nuorilang water falls), Xian, Luoyang, and others, with visuals reminiscent of pointillism, abstract expressionism, and photomicrography. 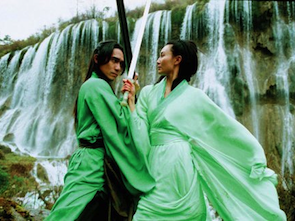 Personally, I am not a great fan of Tan Dun's other works, such as Water Passion After St. Matthew, nor even of his and Zhang's collaboration on The First Emperor, an opera on the same subject as Hero, produced at the Metropolitan Opera. The best of Tan Dun is in his film scores: Hero, Ang Lee's Crouching Tiger, Hidden Dragon; and Feng Xiaogang’s The Banquet.

Damian Iorio, artistic director of the Philharmonic Orchestra of Murmansk, will conduct the San Francisco Symphony on April 25, accompanying excerpts screened from those three films with the music of Tan Dun.

Members of the San Francisco Opera Orchestra will give a free concert  "An Overture to the 2014-15 Opera Season," the night before the opening of the SFO season with Bellini's Norma.

Conducted by orchestra violinist Dawn Harms (also music director of the Bay Area Rainbow Symphony), the concert — at 8 p.m. Sept. 4, in the S.F. Conservatory of Music — will feature music mostly from opera overtures and intermezzi as well as "some special surprises," says Harms. A reception will follow the concert, probably in the lower-level cafe, follow directions from an announcement.

As the attractive, but ad-hoc event is still being formed, the sketchy information so far includes only excerpts from La Forza Del Destino, Manon Lescaut, and Norma, also featuring solos by concertmaster Kay Stern, and principal oboe Mingjia Liu. And, this just in:

We are also so excited to have Chanticleer member, Cortez Mitchell, singing the fabulous, haunting "Summertime," arranged by Clarice Assad. 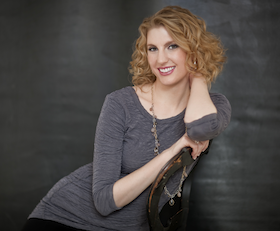 A young "cover singer" rarely gets the promotion to the role she is to sing if the originally scheduled artist cannot perform. In case of soprano Amanda Majeski (Merola, 2008), not only will she make her Metropolitan Opera debut in a major role, but will do so at the Sept. 22 gala opening night, replacing Marina Poplovskaya as the Countess in Mozart's The Marriage of Figaro.

Watch Majeski in rehearsal for the new production, to be conducted by James Levine, directed by Richard Eyre, setting the work in Seville, during the late 1920s. Bass-baritone Ildar Abdrazakov is Figaro, Marlis Petersen is Susanna, Peter Mattei the Count, and Isabel Leonard is Cherubino.

Although those days are far behind her, Majeski's San Francisco performances made a big impression. At the 2008 Merola Program Grand Finale, I wrote:

Leah Crocetto and Amanda Majeski have both crossed the line between talent and accomplishment, equally impressive ... An Adler is certain to await Majeski, last month's spectacular Donna Anna, with two wonderful performances tonight — a soaring Nedda duet with Austin Kness' Silvio, and then in the title role of Barber's Vanessa, in the "At last I've found you" duet with James Benjamin Rodgers's Anatol. The quality of Majeski's voice, her projection and legato coalesce in a thing of joy.

All true, except for the Adler, which Majeski skipped in order to attend Chicago Lyric Opera's Ryan Center, and a subsequent good run at the Lyric before branching out to other companies, including Philadelphia, Zürich, Frankfurt, Glyndebourne, Madrid, Dresden, and elsewhere. 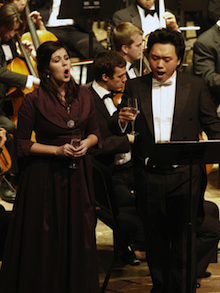 Important as Operalia is to hear young talent, the 2014 edition Saturday night from Los Angeles was handicapped by what may be called — to be kind — production problems. The long wait after performances yielded to more than an hour of awkward speech-making, extravagant non-stop hype for Plácido Domingo (who is credited for creating and maintaining the event), and, worst of all, Domingo's snail-paced conducting, handicapping all singers.

During the program, signs identifying singers and selections flashed on and off too quickly to read, so here's the information you might have missed. Kudos to Rolex for sponsoring the event and the free Medici.tv streaming (and the Rolex official who pointed to his watch to remind Domingo that it has turned after 1 a.m. on the East Coast. The webcast remains on Medici.tv. 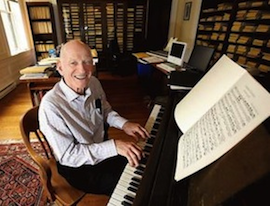 A veteran, universally beloved figure on the local music scene, Alden Gilchrist, 83, died Monday evening after a series of illnesses he suffered during the past 18 months.

Associated with Calvary Presbyterian Church since 1951, Gilchrist was a graduate student at UC Berkeley when he became the church's organist.

In 2011, he was honored with a concert featuring some of his own compositions as well as music by Mozart, Dvorák, Monteverdi, and Bach. Kent Nagano, who had sung in Gilchrist's chorus as a student, flew to San Francisco on a one-day visit to conduct the concert.

The next issue of Music News will have responses to Gilchrist's life and death.

All those about to be quoted agree that the San Francisco Symphony season, opening tomorrow, has much to go for it (e.g. the top item of this column), there are questions and objections. That sort of thing happens with every orchestra everywhere, but perhaps there are some special reasons for criticism of the home team — especially the claim of "risk-taking" on Michael Tilson Thomas's 20th season here.

MTT is a risk-taker, just take a look at the programs of his New World Symphony — Barber, Milhaud, Holloway, Monn/Schoenberg, Stravinsky, Antheil, Knussen, Sinigaglia, Bristol, Hindemith, Clyne, Viñao, Takemitsu, and Westlake for starters — and some of the earlier years in San Francisco, plus "An American Festival" and "American Mavericks" of blessed memory. But what now? Beethoven. As Lisa Hirsch puts it:

... there's quite a lot of music this SFS season that I'd like to hear, but, unfortunately, the season is also so heavily loaded with Beethoven and other top-10 composers that I'm tearing my hair out. There'll be one piece, new or unusual, that I want to hear, but it's sandwiched between stuff I'm just not very excited about.

That's more than twice as much Beethoven as the next two composers combined. And if you're alive, being named Adams will go a long way to getting your work performed in San Francisco. The Adamses, father John Coolidge and son Samuel Carl, have two works each. No other living composer has more than one.

Yet another tack is taken by Michael Strickland, who leads to the same conclusion, beginning with the recollection of the 1970s progamming in the Embassy Theater on Market Street, where:

Ken Russell's lurid, X-rated 1971 film, The Devils with Vanessa Redgrave as a nun being exorcised by Oliver Reed, (was) followed by the black-and-white 1954 Hollywood boardroom melodrama, Executive Suite, with an all-star cast including Barbara Stanwyck and William Holden. On what alternative planet were these two films supposed to have any kind of aesthetic correlation?

Strange pairings in Davies Symphony Hall, says Strickland, include Bach's Brandenburg Concerto No. 3 and Henry Brandt's "spatial music" of Ice Field, with the Tchaikovsky Symphony No. 5 to conclude the evening. Another sandwich problem is the Britten Violin Concerto (good), bookended by pieces "I really don't want to hear live again, such as Barber's Adagio for Strings and Rachmaninov's Symphonic Dances. In fact, I am taking a sabbatical from Rachmaninov for the indefinite future because the composer was not all that prolific and the same pieces of his are performed repeatedly every year at the San Francisco Symphony."

Repetitions of the non-risk taking kind, besides Beethoven, include Prokofief, especially his Romeo and Juliet, at its umpteenth repetion.

It's amazing how San Francisco Ballet seems to have a more varied and adventurous programming — in addition to classical ballet music favorites, of course. See next item. 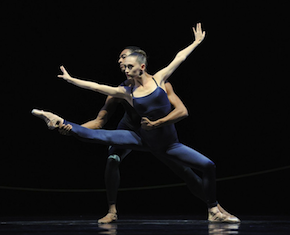 Examples of interesting music from the San Francisco Ballet's next season, in midst of traditional classics — Tchaikovsky still rules (Nutcracker, Serenade for Strings), along with Minkus (Bayadère and Don Quixote):

Shinji Eshima's RAkU; the irresistible fusion of Bach and African music in Lambarena with Hughes de Courson and Pierre Akendengué's Bach to Africa: An Homage to Albert Schweitzer; William Forsythe's The Vertiginous Thrill of Exactitude to Schubert (and not this season, his In the Middle, Somewhat Elevated to Thom Willems' exciting electronic music); the Andante from Britten's String Quartet in F major, Einojuhani Rautavaara's Pelimannit (The Fiddlers), Bach and Piazzolla for Hans van Manen's Variations For Two Couples.

Much, much more, with yet unknown selections for new choreography by Yuri Possokhov and Miles Thatcher ... and in May, eight performances of the entire Prokofiev Romeo and Juliet, in case you missed repeated excerpts from it across the street. 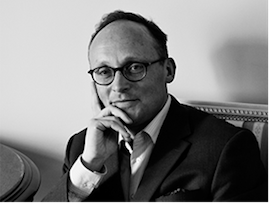 Winter is currently Director of Artistic Administration of the Chicago Symphony Orchestra, assisting Music Director Riccardo Muti. Born in England, Winter studied at the Universities of Oxford (UK) and Voronezh (USSR). His career in arts management began at the Aldeburgh Festival of Music and the Arts, founded by Benjamin Britten.

In the early 1990s, Winter founded a concert agency based in Leningrad (St. Petersburg) and organized concerts, tours, and festivals in the new Russia, independent Baltic States, Armenia, and Georgia. For six years, he was Artistic Administrator of the European Opera Centre, a training program for young singers. Before moving to Chicago, Winter held the position of General Manager of the Irish Chamber Orchestra. For BBC Radio he has presented Music of the Motherland, a series charting the history of 20th-century Russian music for which he won a Sony Radio Award.

"I have enjoyed working with Nick on a variety of projects over these past years,” said Michael Tilson Thomas. ”His profound knowledge of music and his clarity of thinking have produced many excellent results and I look forward to our collaboration."

I am excited and honored to be joining the San Francisco Symphony team, I look forward to working with the musicians and with Michael Tilson Thomas, who has done so much to sustain and develop the orchestra's essential position as a vibrant and innovative artistic institution in this unique and beautiful city.