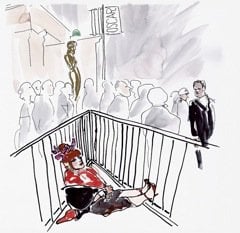 Palmer, a Picasso of fashion sketches, showed some hilarious drawings of Rhodes, including her unceremonious nap on the pavement outside an Oscars ceremony. There she was, a commander of the British Empire (whose clients have included the late Princess Diana, International Criminal Court witness Naomi Campbell, Helen Mirren, and Paris Hilton), making herself comfortable.

"I shall never forget Zandra," Palmer says, "dressed in layers of printed chiffon, enormous glass and mirror jewelry, her bright pink and blue hair blowing in the wind, cheerfully pumping gas in the rain on Baker Street in London." 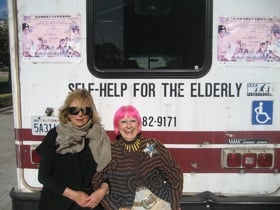 For many years now, Rhodes has been a Southern California resident, living in Del Mar with the famed film studio executive Salah Hassanein, who was born in Egypt — something Rhodes said was helpful in her preparation for Verdi's drama by the Nile. During a visit to the country, more than a decade ago, to work on an Egyptian collection for London Fashion Week, Rhodes filled a sketchbook which she is still using for her Aida design.

Rhodes' involvement with opera is relatively recent. She attended opera only twice in Covent Garden, one of them Tosca, of which, according to Palmer, "all she can remember is that the tenor wore platform shoes."

Still, Rhodes received a tentative feeler from Franco Zeffirelli, then a specific offer from San Diego's Ian Campbell, first for costumes of a 1999 Magic Flute, then for whole 2004 Pearl Fishers production, which came to San Francisco the next year. 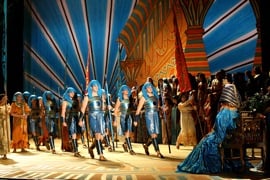 Rhodes' work on Aida began with the Houston Grand Opera, where Anthony Freud, the general director succeeding David Gockley, premiered the production in 2007, just before it was shown at the English National Opera. One British critic 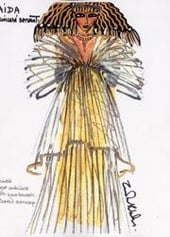 suggested audience members should take their sunglasses to the theater; another spoke of "outrageously colored costumes by the shocking grand old lady of British fashion."

Rhodes says the production changes significantly from venue to venue, but the "ethnic look, pleated polyesters, mirrors, sprayed-on tan, the Ethiopian witch-doctor look [for Amonasro], [stage director] Jo Davies' blue fabric elephant, the presence of birds, figures walking out of an evil eye" and many other touches persist.

One change from Houston, she said, is that the painted T-shirt breasts "not allowed in the Bible Belt," will be just fine here. The dominating colors of gold and shades of blue (turquoise, ultramarine, and lapis) remain.

Philharmonia Goes on the Air

Beginning Sept. 12, Philharmonia Baroque Music Director Nicholas McGegan will host hour-long programs on KDFC, Classical 102.1, and www.kdfc.com. Produced and engineered by David v. R. Bowles of Swineshead Productions, LLC, the commercial-free programs will present works recorded live at Philharmonia Baroque concerts. They will be broadcast at 8 p.m. Sundays, except the first Sunday of each month.

Just as the orchestra's opening concerts of its 30th season, Sept. 24-29, the first broadcast is an all-Mozart program including Concerto for Flute No. 1 in G Major (with Janet See), and Symphony No. 35 in D Major (Haffner).

The third program, on Sept. 26, goes back to Mozart, with arias sung by sopranos Cyndia Sieden, Lisa Saffer, and Yvonne Kenny; and the Symphony No. 40 in G Minor, K. 550.

The San Francisco Symphony did not depart for its European tour Friday, despite the implied promise in the name of its "Bon Voyage Concert" in Davies Symphony Hall.

The enormous task of moving a working tour party of 132, including 117 musicians, their instruments and wardrobe trunks begins the moment tonight's SFS season-opening gala is over.

Even more complicated than flying the musicians to Switzerland, and then taking a bus from Zürich to Lucerne, is moving the cargo. The schedule calls for packing in just two hours after tonight's concert, then trucking it all to Los Angeles, the load there to be "palletized," and flown to Luxemburg, then trucked to Lucerne. 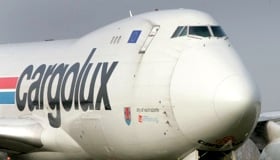 From the end of the Tuesday gala to loading in the Lucerne concert hall at 8 a.m. on Sept. 11 for the first rehearsal, it's a short time for a long trip, and it cannot be a minute late.

Why not fly people and cargo together? Your inquiring reporter has learned that not every European airport has huge cargo areas, in addition to passenger arrivals. The big cargo airport is in Luxembourg, where items are transported by Cargolux. Everything clears the customs there, then gets loaded onto trucks for the short ride to Lucerne.

"Regardless of where we tour in Europe our cargo always arrives in Luxembourg," says SFS Public Relations Director Oliver Theil. "That's the major cargo hub facility in the area. So whether we tour to Germany or France or Austria, we go through Luxembourg." After brief contemplation of the matter, Theil adds: "Next May, we'll even play a concert there!" Serenading the cargo, no doubt.

The European audience this weekend will be perhaps less enthusiastic and demonstrative than shown by the home-field crowd's lengthy standing ovation on Friday ... and hopefully less afflicted by respiratory problems (the loudest coughs inevitably came during the softest passages). Fall is here: Why are there no complimentary cough drops in the lobby?

The More Things Change, the More They Cost

In Opera News, an announcement from the Met:

The Metropolitan Opera, faced with an unprecedented deficit, has announced a price increase of approximately 20 percent on single tickets, effective for performances beginning December 12.

The top price of $13 will go up to $15.50, with corresponding raises in other categories except for the lowest price of $2.50 (Orchestra) and $1.50 (Family Circle). At the same time, the Metropolitan has asked its subscribers for 20 percent contributions.

It's from the Dec. 3, 1966, issue, and was spotted by Jay Galbraith, of Opera Obscura. Ah, 1966! I lived in New York then, and when I was not at the top of the then brand-new Met or across Lincoln Center Plaza, perching at the very top of the theater for a New York City Ballet performance, I had the $1 takeout dinner from Gung Ho, on Broadway at 92nd, which got me "one choice each from Columns A, B, and C."

"Plus ça change, plus c'est la même chose"? Nonsense. Not when it comes to prices.

Had this item in a couple of times already, but it certainly bears repetition: it's Chamber Music Day at the S.F. Conservatory of Music on Sept. 12, from noon to 6:30 p.m., presented by the Conservatory and San Francisco Friends of Chamber Music. Just walk in.

Opening on Sept. 19 in Yountville's Lincoln Theater, it will be the Napa Valley Symphony's 78th season, an amazing feat of longevity. Undaunted by the weight of history, Executive Director Richard Aldag is presenting some young talent, such as the San Francisco Opera's Adler Fellows in the April concert.

In an unusual move, the entire season will be led by guest conductors, but not in search of a new leader to replace Asher Raboy, who concluded a two-decade-long career with the orchestra. The guest conductors are:

By a set of curious chances, China Philharmonic will replace the National Orchestra of Spain in a Davies Symphony Hall concert on April 10 ... and play the originally scheduled program of Bruch, Stravinsky, and Ravel.

The Spaniards have canceled "due to economic issues," and China Philharmonic, led by Long Yu, picked up the date, keeping the soloist and all but one work on the program. Renaud Capuçon is featured in Bruch's Violin Concerto No. 1, the suite from Stravinsky's The Firebird and Ravel's Boléro remain, but a Falla La vida breve dance is replaced by Berlioz’ Roman Carnival Overture.

With the opening of the SFS season tonight, an audition year begins for Sébastien Gingras in the cello section and for Michael Tiscione as second trumpet. One-year substitution contracts go to In Sun Jang (first violin) and Jeff Biancalana (acting third trumpet). Jerry Simas joins the orchestra as a one-year substitute in the position of acting bass/utility clarinet.

Québec-native Gingras comes from the New World Symphony (2006-2008) and the Saint Louis Symphony (2008-2010). Tiscione spent eight years as a member of the Atlanta Symphony.