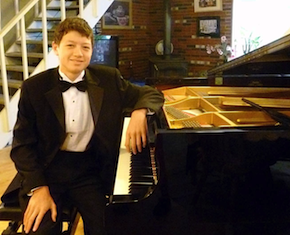 Tyler Hayford was weary; it ran all through his voice. He was on the phone one evening earlier this week, speaking slowly, as though he’d been up for days, each word drawn out, you could hardly hear him. And then at one point he broke down for a moment at the thought of all the pressure he’s feeling, and how a dazzling future suddenly seemed bleak and unattainable.

Not to mention thoughts of Miru and, above all, not to mention the solo piano concert he faces this Saturday night. It’s a benefit for Philippine Typhoon Haiyan Relief at Santa Cruz’s Peace United Church of Christ, on Jan. 11 at 7 p.m.

He sounded like a young man, who'd fallen out of love, who was shaken to the core.

But how could that be? After all, Tyler Hayford is one of those young epitomes of brilliance and early success. At age 10, in 2007, he received the Santa Cruz County Music Teachers Association “Barbara Call Award” for the “Most Promising Musician.” Later that year he performed at the Carmel Bach Festival. At 15, he won first place in the United States Open Music Competition. That year he was also one of only 23 pianists admitted to the Colburn Academy Piano Festival in Los Angeles; and in the same year he was the youngest of the six finalists in the 26th annual Celia Mendez Young Pianist’s Beethoven Competition. And there were more awards that year.

And then this last summer, Tyler, now 17, and a junior at the Pacific Collegiate School, was one of only six pianists admitted to New York’s prestigious Meadowmount School of Music. The school offers a seven-week summer school for young musicians training for a professional career. He attended on a scholarship. The school’s alumni include Itzhak Perlman, Stephanie Chase, and Yo-Yo Ma.

It was at Meadowmount that life threw Tyler Hayford a high curve, and he went after it with all his heart.

After a long silence, he went on. “I’m good at what I do. Obviously. But lately I’ve been talking to people who went into music and lived the life, and they all tell me not to do it. They all say how difficult it is, and that if you’re not wildly successful it just isn’t worth it.”

He added that he’s also interested in engineering and architecture, but music has always been his foundation.

“It’s been a reality check. You have all these dreams and fantasies, and then there’s what you have to do. My love for music is not diminished; if anything it’s grown, but I see now I’m really going to have choose one way or another.”

His parents have been supportive, but some others have sowed his doubts. Recently, he went to stay with a friend in New York City. Her mother is a conservatory teacher.

“She didn’t recommend me doing it. She said she would never want her children to have to go through that, especially the first decade after getting out of college. I don’t think she regrets it, she just thinks how it could have been a different life.”

I’m good at what I do. Obviously. But lately I’ve been talking to people who went into music and lived the life, and they all tell me not to do it. - Tyler Hayford, pianist

A different life than in a tiny apartment and salaries barely enough to cover the rent. Living on the edge year after year. With luck and smart choices she and her husband have made a life. But in the middle of the night she wonders whether it was worth it. That’s what Tyler heard.

A few days later, he took some lessons from a local teacher in Manhattan. Tyler had been away from home for a couple of weeks and he always feels better in the hands of a teacher. So he went to her apartment, and when he walked in the door he was shocked.

“The whole apartment was smaller than my bedroom, just a tiny kitchenette. There was a grand piano and a bed in the curve of the piano. Someone told me later that if you’re not a teacher at a school in New York, this is how you live.”

As it turned out the teacher living in this small space was exceptional and offered Tyler a bold critique.

“She mainly said how my playing is very on the surface, how I need to get depth. And so part of that is physical, sitting lower at the piano, for example. Otherwise, you’re not getting to the bottom of the note, but there was also a psychological aspect and how in the phrasing I seemed to be holding back. It was eye-opening and it started me thinking about a lot of other things.”

Just on the day we spoke to Tyler his teacher in Santa Cruz told him the same thing — that he needed to play on a deeper level. And so he’s begun to realize that all of his focus on technique lately, particularly for this upcoming concert, has led him astray, and that he’s been ignoring the substance of the music.

“I see now I’ve become detached from my playing, I’m not getting to the essence of these pieces, I’m not digging down deep enough, which is a scary thing to realize a week before this very important concert. But still I’m glad this happened. I know now that I need to be playing for myself not just to the public ear.”

“I think my mind got on other stuff.” He laughed as though to underline the understatement. “Relationships would be part of it. It’s difficult to admit.” There was a long pause.

His girlfriend is Miru, a violinist he met in the third week of the program at Meadowmount. “For one, she beautiful,” he said by way of introduction, and explained that she was half Japanese and half Taiwanese (he is also half Taiwanese).

“She’s an amazingly deep and caring person, and one of the wisest people I know. I miss her so much.”

It was at this point that Tyler broke down for a moment, under the weight of her distance from him and, for a moment, his feeling of distance from any certainty about the future, and perhaps the subtle fear that he might lose his music and his muse.

“I’ve only heard her play twice,” he continued, “ but you know how the way somebody plays often reflects their personality and how they view the world; well her playing is like that. It’s very deliberate, very thoughtful and, of course, very beautiful.

“She’s also a great inspiration and I’ve been thinking about that lately, especially after she told me she’d been having trouble with the Mendelssohn violin concerto. She wasn't feeling it, it wasn’t working for her, but she discovered that when she turned it into a story, and a story about us, which included real life events and memories, she started playing it so much better.”

As he was telling the story, and thinking out loud, he said, “I guess I can do the same thing, can’t I?” And then in the midst of the revelation he added, “it’s not right to call my love for her a distraction. It can be, but it shouldn’t be; it should be just the opposite.”

When Tyler was about 13 he hit a wall, as he puts it. He lost all desire to play or to practice, or to reach perfection. It all seemed a drudgery. Part of it was that he’d become sick of the competition. Since the age he 10, he’d been in one competition after another, beginning with small recitals, but as he rose up through the talent pools the competitions became more onerous and gradually he became more nervous with each performance. Now it’s one of his biggest struggles. He gets thinking about each note and becomes obsessed with being judged. As a result he sometimes turns hesitant.

“When you’re performing for someone else,” he said at one point, “it should be like letting someone tap into the personal connection you have with the music, but when I get nervous I can’t do that at all. That’s another difficult thing about the musical life.”I just don’t care about the mistakes, the little goofups. Because they’re not important. It’s the music that’s being made, not the mistakes. It’s what's going into the music not what’s being taken out. - Tyler Hayford

“I still love playing the piano; that hasn’t decreased at all. If anything I want to do better, play much better. My drive hasn’t decreased, my passion is the same; it’s just …”

He let the thought go. It’s just whether you can find the courage to do what you’ve always wanted to do and take a risk that it won’t turn out quite as you imagined.

“It’s always been my dream to become a performing artist and then, ideally, settle down to teach. Teaching has always been what I’ve wanted to do. That would be the best possible thing to happen. But I really just don’t know what’s possible, or what to expect.”

What is it about Miru’s playing that means so much to you, we asked.

“She just plays so beautifully, although even if she didn't I guess I'd still say that. When I listen to her I listen for all the good things; I listen to her intentions and what she means to play, what she means to share. I just don’t care about the mistakes, the little goofups. Because they’re not important. It’s the music that’s being made, not the mistakes. It’s what's going into the music not what’s being taken out.”

“That’s right,” he said. “I know that and I need to remember it. I should be playing for Miru, shouldn’t I?”