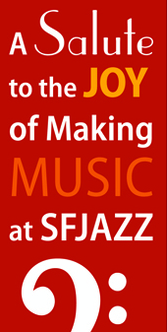 Money from the event will fund scholarships for low-income youth. Featured artists include among others Mark Inouye, San Francisco Symphony’s principal trumpet, along with his quartet, The Unit. The Master of Ceremonies will be five-time Grammy nominee John Santos, a master percussionist and a former Community Music Center faculty member.

The Chorus is composed of singers between 8 and 12 years-old; altogether a “motley crew” according to the chorus director, Beth Wilmurt. She’s been with the program for 12 years and is at once the children’s confider-in-chief and a remarkable conductor. As you watch her interact with the children and bring the chorus to life and attention you realize the fine art of motivating children these days and the enormous care and patience required.

Members of the chorus come from both public and private schools. A few are home-schooled. They’re a mash of economic backgrounds, personalities, and family dynamics. Some have behavior problems. A couple have gender issues. One was a ‘female-to-male’ teenager. Another child, an 8-year-old boy, identified as a girl.

“We’re a funny group of odd balls,” explained Wilmurt. “I include myself.”

We spoke to a couple of the music students, including Margo who is 12. Asked how she liked the music center she replied, “It takes my mind off of things, the stress of middle school, keeping up with all the home work, not being late. And when you have to learn all the time to just ignore bullies.”

“Is there a lot of bullying at your school?” we asked.

She nodded. “But not here: It’s a different world.”

The free program for chorus is two days a week at the Community Music Center, which is on Capp Street, between Mission and South Van Ness. If you don’t know it, the center itself is in a lovely old building with a studio and a brick courtyard.

“The kids are very passionate, very creative,” Wilmurt told us. “The center provides a refuge; the atmosphere is calming and comforting. It’s just what they need.

“At the same time, and I’ve seen this again and again, this is a place where kids can come and express their energy; they can discover how their voices are like an instrument. So they’re discovering things about their bodies and who they are. It goes deeper than their consciousness. I get great satisfaction being with them during this first realization and I am always moved by the rawness of their voices.”

Wilmurt works a lot with harmony and rounds. “The effect is so palpable and when the children get past covering their ears and really listening to each other and themselves, it becomes a kind of addiction and you’ll hear them singing to themselves wherever they go.”

She’s also careful to pick the right material to sing.

“I’m really good at that. I don’t do much pop music or theater, or things that the children are apt to recognize. The goal is to free up natural voices and so I try to disarm them and level the playing field. I’m always trying to find something nobody has head of and so we do a lot of international folk music and by the same token if there’s a child from another ethnic background I look for something from that culture. In that way I tailor the music around their personality but keep it accessible to all.”

Wilmurt says that not unlike her students she works off of impulse as well. “I don’t follow proscribed notions and I don’t want to convey the feeing that we’re boxed in, that we’re tied just to what’s on the page. I work organically.”

“Sometimes,” she said, “ I feel like we’re a bunch of wild animals.” Interestingly, Wilmurt whose background is in rhythmic theater, is also an actor and is about to begin a run at the Marin Theater Company: She will play an embittered daughter trying to escape her conniving mother in Martin McDonagh’s The Beauty Queen of Leenane.