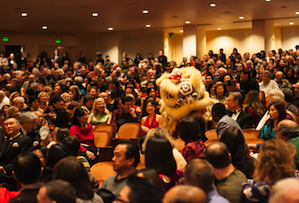 Year after year, San Francisco Symphony's Chinese New Year Concert and Celebration is a bundle of fun ... and it occasionally provides great musical discoveries, such as Yuja Wang's debut in 2006 at age 19.

On Saturday, with Davies Symphony Hall was packed to the rafters, with lion dances and a big party in the lobby, featuring a matinee presentation of Chinese music, played exceptionally well by the San Francisco orchestra, which was so well received on a tour of China a few months ago (playing Mahler).

On the podium: a dynamo of a conductor: Mei-Ann Chen, the Taiwan-born music director of the Memphis Symphony. The second half of the concert featured George Gao on the erhu in the familiar Butterfly Lovers Concerto. The first half featured works by four contemporary Chinese composers: Huanzhi Li (1919-2000), Tyzen Hsiao (b. 1938), Che Chang (probably better known as Zhang Cheh, see below), and An-Lun Huang (b. 1949). 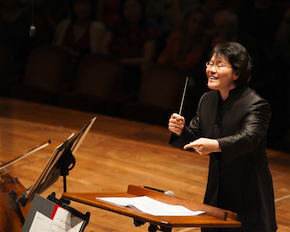 To say "Chinese music" is imprecise and misleading. All works on the concert belonged to the peculiar Western-imitating genre: major scale, heroic/optimistic, unison-heavy, harmonically simple, with pentatonic tunes. I cannot think of any phase or place of music elsewhere with such consistency — or monotony — from the committee-created Yellow River Piano Concerto or Butterfly Lovers, to the Chen-introduced works from Taiwan and the Mainland, spanning the second half of the 20th century.

Still, the truth is, it was all more authentically Chinese than pesky Shen Yun's "Reviving Five Thousand Years of Civilization" in concerts featuring — so help me — Tchaikovsky.