[email protected] has kicked off its eighth season, bringing a burst of chamber music to the Peninsula. Each summer, esteemed guest artists thrill audiences in the concert hall, but that’s not all. The dream of working with them in the rehearsal studio is what brings top talent to the Chamber Music Institute. Meet the Gray siblings, two such aspiring teen musicians who have journeyed from Illinois for this intensive learning experience.

Erika Gray, age 14, her brother Johannes (13), and mother, Brigitte, have just flown in from Wilmette, a suburb north of Chicago. With them came their father, Tad, to help them get settled into their rented house in Menlo Park, and Johannes’s 5/8 size Montagnana model cello, recently crafted for him by maker Lawrence Wilke. In the large suitcases are concert clothing, about six books each (including Johannes’ bird books) and the whole family's running gear — Johannes’ shoes are bright yellow, a color he wears in some fashion each day. Erika left her soccer ball at home.

The kids are looking forward to a concentrated three weeks of chamber music rehearsals, coachings, and performances as participants in the CMI Young Performers Program for pre- and early-conservatory level students. They are two of only 32 chosen for this opportunity to work with Festival artists and other talented students from around the world. “I can’t wait to play chamber music with kids my own age,” says Erika brightly. It usually takes an older partner to keep up with her violin chops. “We’ll be playing with kids from Quebec and Denmark,” said Johannes excitedly. As he is always up for challenges, working on difficult repertoire was a draw for him. “I’m really glad to be playing pieces with interesting cello parts.” The choice of Dvořák’s Piano Trio No. 4 in E Minor, Op. 90, (“Dumky”) for him, was carefully planned by festival educators. All repertoire and groups are preassigned and participants come to camp fully prepared.

Putting In the Time 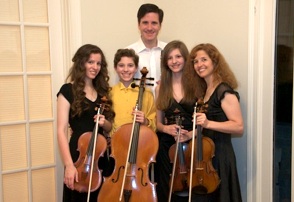 An eight-hour-a-day schedule might seem daunting to some, but it’s close to the norm in the Gray household throughout the year. These kids live, sleep, eat, and breathe music as a part of life, even eschewing the routine of regular schooling. With a schedule similar to an Olympian in training, where would they find the time? Erika and Johannes both take two private lessons per week on their instruments, plus a one-hour piano lesson, and rehearse with an accompanist once a week. They practice three hours per day when they don’t have an important engagement, more when they do. Their older sister Ingrid (19) is just as committed to playing viola. Until recently they were enrolled in The Academy program at the Music Institute of Chicago, which offered additional musicianship training, orchestra, chamber music, master classes, and performance classes, keeping them busy on Saturdays as well.

Brigitte Gray keeps it all going, as mom, chauffeur, instrument repair technician, music teacher, chamber music coach, concert organizer, and academic instructor; she home-schooled the kids through seventh grade. And not least, she’s second violinist in the family string quartet, Shades of Gray. Dad cooks, guest stars on the clarinet when he can, and is the designated Team Gray sponsor. 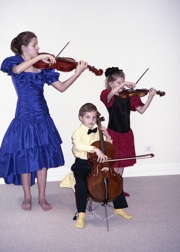 Brigitte is uniquely qualified to nurture her kids’ musical talent. Both a violinist and violist herself, she was raised in a musical family of seven kids, born to German immigrant Gunther Paetsch, a cellist, and his violinist, wife Priscilla. Five of the seven played string instruments, and often missed school to perform outreach concerts in the family chamber ensemble. Growing up, three of them performed in the Colorado Springs Symphony together with their parents. Brigitte went on to play in the New Haven Symphony Orchestra, New England Chamber Orchestra, and Charlotte Symphony Orchestra as well.

No doubt the Gray children's musical excellence is due to early exposure as well as innate talent. “Both kids showed an amazing ability to focus at an early age,” says Brigitte. “At 3-years-old they would sit with me in my teaching studio for five hours, absorbing everything. One month, I took them to nine noontime concerts given by Chicago Institute of Music alumni. They sat mesmerized through all of the concerts and were praised from the stage for it at the end. There they met their teachers, violinist Desiree Ruhstrat and cellist Nell Novak [Johannes now studies with Hans Jensen and Gilda Barston]. Contact with the musicians and their encouragement made the kids want to play.” Johannes began cello at age 2 1/2 and Erika at 3, both studying with Brigitte, initially.

The Gray children have amassed an impressive list of competition prizes and have performed high-profile engagements, including with Yo Yo Ma’s Silk Road Project. Highlights enjoyed by the entire family are the house concerts they’ve performed since 2000. Twice a year, up to 100 people pack the Grays’ living room to hear them play. Some supporters from the neighborhood and the music community have attended for the entire 10 years, also enjoying the postconcert reception. 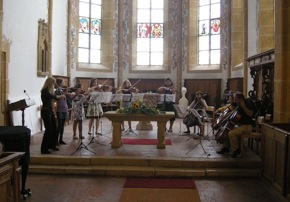 Such accomplishment has not come without a price. Summer can be hard for the social Erika. “I can see all of the kids outside from my bedroom where I’m practicing,” she says. Erika was a top prize winner at the Midwest Young Artist Walgreen’s National Concerto Competition, yet had to compete on her birthday. Johannes put in seven hours of work a day the week of Christmas vacation, preparing to compete at the same competition. He won, over the junior and senior divisions, and with it a performance of the Dvořák cello concerto with the MYA Orchestra.

The kids wouldn’t change a thing. They say it’s fun to practice and it almost never feels like a chore. Although their upbringing is different from that of others in the junior high they currently attend part-time, their best friends get it. “They think it’s cool,” says Erika. “There are also other kids that leave school to focus on sports like skating,” says Johannes.

Their teachers in Illinois recommended [email protected] “I don’t know of many other programs that offer this training to students at such a young age,” says Gloria Chien, chamber music institute director. “It takes a special level of commitment for students from out of state, and this year we have the highest level of talent we’ve ever had.” And the Grays can’t wait to get started.