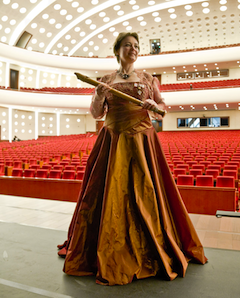 Petri, a Danish artist, has been sought after as a soloist with many noted orchestras, including the Academy of St. Martin in the Fields. She began playing the recorder at age three, has specialized in both Baroque and contemporary repertoire. Among dozens of works she premiered are those by Malcolm Arnold, Gordon Jacob, Richard Harvey, Daniel Börtz, Erik Haumann, Hans Kunstovny, Erling Bjerno, Thomas Koppel, Ove Benzen, Vagn Holmboe, Piers Hellawell, Gary Kulesha, Asger Lund Christiansen, many others.

In advance of the concert, on Feb. 6, at the Martin Family Hall at Menlo School, [email protected] Artistic Administrator Patrick Castillo presents an exploration of the music to be presented on the "Baroque Journeys" program. This event is free and open to the public. Watch a preview of the concert, and read a Q&A with Petri.