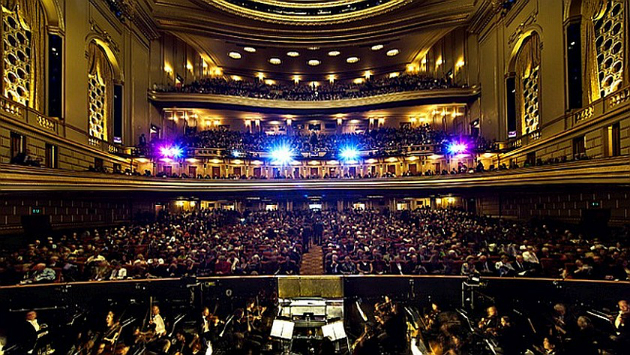 Night after night, there are big ovations for the orchestra at the San Francisco Opera's current production of Berlioz's Les Troyens, but few in the audience would recognize these great musicians if encountering them away from the orchestra pit.

To lift the veil of anonymity just a bit, some of the many glorious solos in the dark come from principal clarinet Jose Granero, principal horn Kevin Rivard in the pit, and hornists Chris Cooper and Eric Achen, playing antiphonally on either side of the Grand Tier. There are other brass players running from floor to floor to play those haunting, far-away sounds. (One evening, shifting places during the performance, I held the elevator door open for one of these wandering offstage minstrels, wondering what would have happened if I didn't save him from the four-story hike.)

Stephanie McNab plays the piccolo -- as prominent here as in any opera, and hitting a hundred C's in a wondrous texture -- and principal cellist David Kadarauch has some gorgeous solo bits. Leading the strings is renowned concertmaster Kay Stern. Carla Maria Rodrigues is principal violist, Julie McKenzie is principal flute, and Mingjia Liu the principal oboe. The English horn solos are played by Janet Popesco Archibald.

When I asked a veteran member of the orchestra who he (or she, to keep this confidential) would single out, the answer came from somebody not known for currying favors: "It's all Runnicles."

Donald Runnicles, of course, is the visible and de facto leader of the orchestra, acclaimed by audiences and musicians for triumphs in many large-scale productions. "If it's a six-hour opera, the call goes out: 'get Runnicles'," he has said, adding: "I actually like small operas, too."

But then, the compliment was returned with great force and sincerity, Runnicles heaping praises on the musicians... out of their earshot.

With only one shadow crossing over the proceedings ("how sad it will be after the last performance on July 1!"), it was all a celebration of what to many in the hall is the greatest opera ever written. It's certainly the most hypnotic and the one demanding repetition without end.

Runnicles went from extolling to glorifying -- all to vigorous nodding of heads in the audience -- calling the music "radiant... sensual... a halo of sound... with phenomenal orchestral texture," something the orchestra loves to play, even against the challenge of four hours of music over a five-hour evening.

From experience speaking with members of the S.F. Opera Chorus, whose singing totals about a taxing two hours each night, the same is true about them. And absolutely everybody -- choristers, instrumentalists, fellow soloists, audience, and conductor -- is grateful to have the experience of soprano Susan Graham's Dido, rehearsal after rehearsal, performance after performance.

Holoman, author of the Catalogue of the Works of Hector Berlioz, played excerpts from Troyens, calling attention to orchestral passages and individual instruments in a thrilling Berlioz graduate class. He didn't say, but implied that audiences taken by The Horse and the spectacular production miss something essential when not also paying attention to the orchestra... especially "as it performs with Runnicles."

It's a rare, wonderful lovefest in the Opera House, coming to close on July 1.