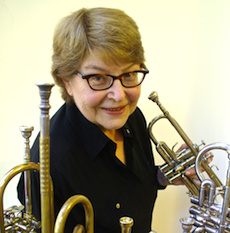 When Diablo Symphony's Matilda Hofman strikes up the band for the first time in her capacity as music director Friday and Saturday this week, she will lead both the celebration of the orchestra's 50th anniversary and the performance of a composition by Joyce Johnson Hamilton, who led the orchestra for 31 years.

In the midst of ongoing artistic contention and musician strife in "other symphonies," the venerable Diablo Symphony Orchestra, with its volunteer musicians, upon retirement of its conductor after 31 years, used one year to select a slate of conductor candidates, then presented the following season with five guest conductors chosen from the initial slate, and is now completing its 50th birthday under the baton of Matilda Hofman, the winning conductor elected by a vote of the musicians.

In addition, the retiring conductor, Joyce Johnson Hamilton, not only returned to the opening concert as the featured artist, but has also composed a special piece, Celebrate Today!