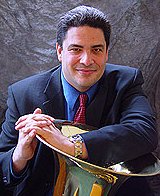 San Francisco Conservatory of Music board chair Timothy W. Foo announced on Wednesday the appointment of David H. Stull, 46, as the school's next president, to take office on July 1.

He will succeed Colin Murdoch, president since 1992, and responsible for overseeing the school's move to its current $80 million location in the Civic Center.

Stull is currently dean of the Conservatory at Oberlin College, where he headed a major project for a new building and numerous new programs, including the creation of a record label and orchestral tours to Carnegie Hall and China.