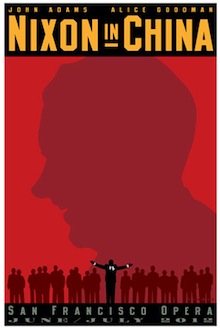 Behind David Gockley’s desk in the War Memorial Opera House is a small framed poster from the world premiere of Nixon in China. Throughout his career, Gockley — who served as general director of Houston Grand Opera from 1972 to 2005 and has been general director of San Francisco Opera since 2006 — has commissioned and produced dozens of new works for the opera stage. But the prominent placement of the Nixon poster speaks volumes about the significance of John Adams’ groundbreaking 1987 opera, which depicts the 37th U.S. president’s historic 1972 visit to Communist China.

For Gockley, bringing Nixon to San Francisco is the fulfillment of a long-held goal. “It’s about time,” Gockley remarked in a recent interview at the War Memorial. “When I took this job, it was at the top of my list as to what I felt I could contribute — to finally get Nixon in China to the home city of the composer.”

San Francisco is not alone in its delayed response to the opera. The Metropolitan Opera waited until 2011 to produce the work. In San Francisco, Gockley’s predecessors simply passed on Nixon, though, to their credit, Lotfi Mansouri, general director from 1988-2001, produced Adams’ The Death of Klinghoffer in 1992; and Pamela Rosenberg, who headed the company from 2001-05, commissioned and premiered Adams’ Doctor Atomic in her final year in San Francisco.

Given that Adams, who lives in Berkeley, is one of the most celebrated composers in the world today, opera lovers may well ask: “What took so long?”

Although Nixon was an unknown quantity, Gockley didn’t hesitate to produce it in Houston. In 1987, he recalls, the only Adams music he was familiar with was the composer’s symphony, Harmonielehre. But the first pitch for the new opera came from Peter Sellars — then artistic director of the American National Theatre — and that, says Gockley, was sufficient.

“When I took this job, it was at the top of my list as to what I felt I could contribute — to finally get Nixon in China to the home city of the composer.” — David Gockley

“Peter Sellars was so hot at that time, and that meant a lot to me and my fellow co-producers, which included BAM, Kennedy Center, and Netherlands Opera,” explained Gockley. “If Peter was behind something, we felt it had to have value. I admit I had never heard a note of John Adams’ music until Harmonielehre. But I loved that music, and thought this was a good chance to take. I thought the project had sex appeal, that the subject matter was provocative. And the idea really seemed to pique people’s interest.”

Conceived by Sellars (who directed the Houston production), with a libretto by American poet Alice Goodman, Nixon was Adams ’ first opera. It arrived in the world ahead of a subgenre once nicknamed “CNN opera” — works drawn from news headlines, rather than novels, plays, or similar sources.

Composed in three acts, Nixon is a rich fantasia based on actual events. The opera begins with the Nixons’ arrival at the Beijing Airport. The president meets with the inscrutable Mao, and the act ends with a lavish banquet. In Act 2, the visitors watch a performance of the ballet The Red Detachment of Women, presided over by Madame Mao. The singer playing Kissinger is required to take a leading role in the ballet. Act 3 is an extended scene for all six principals, who reflect on the significance of the visit.

In his memoir, Hallelujah Junction, Adams recalls being astonished that Gockley agreed to produce the opera. “Gockley,” he writes, “had taken a big risk commissioning a composer who’d never written a note for solo voice much less a full-length opera.”

“I thought it was a very important piece,” he says. “I find Nixon, compared to John’s current scores, to be funkier, very diversified. I love the synthesizers that create that pulse, almost a kind of rock pulse, in the piece. The paucity of strings gives it a thinner sound that I think works in the kind of Big Band, Glenn Miller melody that is so pervasive throughout the score.”

Still, the first Houston performances drew bewildered responses from some critics (“That was it? That was Nixon in China ?” began Donald Henahan’s oft-quoted New York Times review.)

Today, it appears that Nixon was ahead of its time ... it has continued to ascend, both on the strength of Adams’ reputation, and as a distinctly American opera.

“About 70 percent of the critics didn’t get it,” allows Gockley. “A lot of people just thought the libretto was nonsensical and the music was more of this minimalist stuff, which was just developing its own credibility as a genre.”

Nixon also depicted a president who was enormously unpopular for his notorious use of Red-baiting, for prolonging the war in Vietnam, and for the “dirty tricks” and Watergate scandal, which led to his resignation.

Yet Gockley believes that the events portrayed in Nixon reveal the president’s finest hour. “Of all of Nixon’s actions and accomplishments — among them many terrible, shameful memories — this one turns out to be the most visionary, the most statesmanlike, the most courageous,” he says. “He had a strategic sense of history.”

Today, it appears that Nixon was ahead of its time. There’s a long list of contemporary operas that have languished after one or two productions. But Nixon has continued to ascend, both on the strength of Adams’ reputation, and as a distinctly American opera. Along with works such as Jake Heggie’s Dead Man Walking, it continues to receive new productions around the world. According to Boosey and Hawkes, Adams’ publishing house, Nixon has been performed in 18 U.S. cities since 1987, as well as in major houses in Europe, Canada, Australia Greece, Finland, and the United Kingdom.

It’s also reaching a new generation of audiences unfamiliar with the events it portrays. In his liner notes for the original Nixon recording, critic Michael Steinberg wrote “Surely there has been no audience member at any performance of Nixon in China, no listener to this recording, who has not heard Richard Nixon speak in actuality, on television, on the radio.” That’s no longer true. Brian Mulligan, the baritone singing the title role for the first time in San Francisco, embodies a new wave of singers learning the opera and its history.

Mulligan, who is in his early 30s, first saw Nixon in a Denver production. “Honestly, I was overwhelmed — exhilarated and furious,” he says. “There was so much I didn’t understand. Adams was writing about things in the public consciousness. I knew about Nixon, and vaguely about his trip to China . But I didn’t know the specifics. The second scene in particular — this conversation between Mao and Nixon — is so dense and difficult. There were all these oblique references — to the Yellow Crane, to Nixon’s own writings. I just remember thinking ‘What are they talking about? Why didn’t I know this?’ ”

Mulligan, whose previous San Francisco Opera roles include Valentin in Faust and Ragueneau in Cyrano de Bergerac, began researching the new role by reading various Nixon writings. Earlier this year, he traveled to China. He asked people he met for their recollections, and says he received some answers. But he also returned with a sense of the unanswerable. “These were poetic things that Mao and Chou En-lai said,” he notes. “People told me ‘Not everything is meant to be understood.’ I think this is part of why Alice Goodman’s libretto is so brilliant.”

Currently in rehearsals, Mulligan says he continues to gain respect for Nixon. “It’s challenging, and universal,” he says. “There’s a feeling of overwhelming exhilaration in this opera, like being strapped into a roller coaster, or an airplane. There’s a feeling of accomplishment, too — the power of men to overcome these differences and connect as humans.”

Adams, commenting via email from Los Angeles, where he was in rehearsals for the premiere of his The Gospel according to the Other Mary at the Los Angeles Philharmonic, said he hadn’t seen the Vancouver production of Nixon. But he was pleased that the opera was coming to San Francisco. “I haven’t a great deal of huge importance to share about Nixon beyond the fact that I’m happy that it gets so many performances these days, especially considering how it was pretty much dismissed when it first appeared 25 years ago,” he noted. “Whoever said ‘living long is the best revenge’ was right.”

Gockley, meanwhile, leaned back in his office under the poster of the production that started it all. A Nixon rehearsal was streaming live on a screen opposite his desk. “Look, Air Force One is landing,” he said. “I can’t wait.”