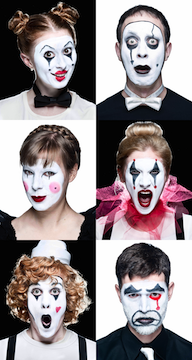 A hundred years ago, Arnold Schoenberg premiered his Dreimal sieben Gedichte aus Albert Girauds 'Pierrot lunaire' (Three times Seven Poems from Albert Giraud's Pierrot lunaire) in Berlin. The work, now known by the more manageable name of Pierrot Lunaire, Op. 21, was unusual in many ways, with a narrator (usually, but not always, a soprano) speaking and singing 21 poems, in the Sprechstimme style. The melodrama is atonal, but still eight years before Schoenberg devised the twelve-tone technique.

On Oct. 4, S.F. Conservatory of Music alumni Nonsemble 6 will celebrate the centennial with a costumed and staged production of the work in the Conservatory concerthall. Brian Staufenbiel, stage director of Conservatory resident company Ensemble Parallèle, is director of the production, which includes video projections, subtitles, artwork by Mara Elana, and "lunar visuals" designed by Alex Roten.

Pierrot lunaire tells the story of a wayward clown, Pierrot, who is intoxicated by the moon and seeks out nocturnal adventures: He chases after the lovely Columbine, teases her father Cassander and creates mischief in a graveyard before eventually returning home to Bergamo.

The program also includes STIC ("Sensitivity to Initial Conditions") by Dan Becker, chair of the Conservatory’s composition department, and 14 Ways of Describing Rain, a 12-tone work by Hanns Eisler, composed on the occasion of his teacher Arnold Schoenberg’s 70th birthday. Along with the Eisler composition, Joris Iven’s silent film Regen (Rain) will be screened; it depicts 1920s Amsterdam before, during, and after a rainstorm.