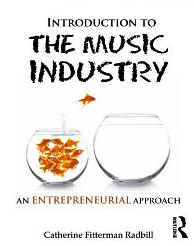 Recently, I wrote a piece about careers in music titled Portraits For a Young Musician. It’s about innovative ways to make a career in music, outside the performance hall and beyond the classroom.

Among those I interviewed was Catherine Radbill, Director of the Undergraduate Music Business program at New York University’s Steinhardt School of Culture, Education and Human Development. She’s also the author of a new textbook, directed largely at freshmen, titled Introduction to the Music Industry: An Entrepreneurial Approach.

In our conversation we talked about the growth of music business schools in this country and the increasing presence of music schools in Asia. For example, NYU has a campus in Abu Dhabi but now also in Shanghai.

We also talked about some of the ways she instills a sense of entrepreneurial initiative among her students. Seniors are given research projects in which they must create a business venture of some sort, which includes a personal mission statement and a description of a business model.

One student, a composer, envisioned setting up a small company that would serve politicians, by creating original music that would in some way enhance their political identity. “Music as brand is how I think of it,” Radbill explained. “In effect, a theme song would run under spots and at the end of tags used on radio.”

How practical such a proposal might be isn’t clear, but Radbill says that she encourages students to think of ever-new applications.

She had another student whose concept involved working in Southeast Asia to find places where indigenous music is being lost. The idea was to set up a venture to find musicians from a certain village to make a record and then to get older and younger musicians in the village working together to make new recordings. The hope would be for the village to run the business and make money, as well as preserve their musical heritage.

“This is part of the growing field of social entrepreneurship where the goal is to create an organization that can fund itself and at the same time encourage local participation. The student entered the idea in a competition and it came in third, but the problem was funding. That’s the next obstacle. It’s often easy to come up with a creative idea involving music, but then how do you make it practical?”

Radbill gave an example: “I know a dean, a graduate of MIT, who got a jillion dollars from a foundation to do genome mapping of rhythms around the world. In effect, a cultural genome. So he travels to different places making notes of rhythms and where they came from. Can you imagine a more interesting job?”