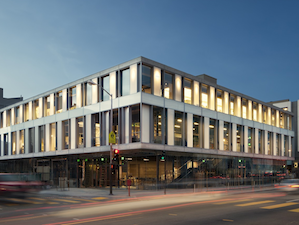 The regal sound of a 16-voice brass choir rose at the bustling San Francisco corner of Franklin and Fell Streets on Monday morning, when native son Jacob Garchik and his low-brass brethren blew a soulful fanfare to consecrate the new SFJAZZ Center.

Garchik, a noted New York trombonist and composer who has played with top jazz guys like saxophonist Lee Konitz and arranges for the Kronos Quartet, lined up a prime cast of Bay Area trombone, baritone, sousaphone, and tuba players to perform the two-part piece he wrote on commission for the opening of the country’s first major stand-alone facility designed specifically for jazz. Four-voice choirs were spread around the exterior balconies and even across the street, swapping call-and-response phrases in celebration of the new center.

Garchik’s Bay Area ensemble included jazz trombonist Wayne Wallace, with whom he studied while attending Lowell High, and trumpeter Fred Hung, who went to the Manhattan School of Music with him and now lives here. 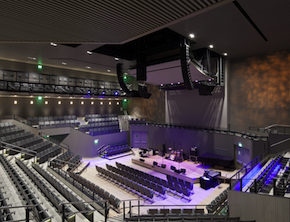 “All the trumpet players were stuck on baritone horn,” Garchik, 36, says with a laugh. He’d arrived a few days before the opening to rehearse the choir inaugurating the new $53 million, 65,000-square-foot jazz center, with its elegantly simple, acoustically refined 700-seat Robert N. Miner Auditorium. “I love to explore the low brass. To exclude trumpet is a really interesting sound.”

Garchik’s fanfare set off a day of speeches, ribbon-cutting, and music by the SFJAZZ High School All-Stars Orchestra and the city’s funky Bourbon Kings, led by trumpeter Jaz Sawyer, with whom Garchik played in the San Francisco Symphony Youth Orchestra. The music builds on two contrasting pieces that open Garchik’s expansive 2012 recording, The Heavens: The Atheist Gospel Trombone Album, on which he overdubbed all the parts. His nine-piece ensemble has been performing around New York, to much acclaim.

The day began, aptly enough, with Creation’s Creation, which the composer describes as “an explosion of sound” having to do with the Big Bang and the birth of the world. Then came the funky Problem of Suffering, the antiphonal choirs trading phrases across crowded Fell Street.

Garchik is one of many New York musicians talking about the major new place to play in San Francisco — a city with a rich jazz tradition dating back more than a century to the sinful Barbary Coast, where musicians played ragtime and blues in dance halls, saloons, and brothels.

Legacy of a Local Jazz Organization

Founded in 1983 by the fledgling impresario Randall Kline and sound-and-light man Clint Gilbert, SFJAZZ until now has produced concerts in rented theaters, clubs, and sacred spaces around town, as well as at the palatial Paramount Theatre in Oakland. In addition to presenting stars such as Sonny Rollins, Milton Nascimento, and Diana Krall to big halls like Davies Symphony Hall and the Masonic Auditorium, Kline has brought a rich range of music to such places as Temple Emanu-El, where the brilliant clarinetist Don Bryon played Mickey Katz’s comic klezmer; Grace Cathedral, echoing with the crashing piano chords of the iconoclast Cecil Taylor; and Bimbo’s nightclub in North Beach, where blazing Afro-Cuban bands lit up the night.

“I was really convinced we had to make a space that was not hierarchical. Here, when you’re looking at the performers, you’re also looking at the audience.” – Mark Cavagnero, architect

But now SFJAZZ has a permanent home where it can expand its performance and education programs and control every aspect of the production. That’s huge for Kline, the executive artistic director, a perfectionist who strove to create a pure performance space with the intimacy and excitement of a jazz club like New York’s Village Vanguard and the acoustic clarity of a Carnegie Hall.

Cavagnero collaborated with two other noted designers on the hall: acoustician Sam Berkow, whose projects include the performance spaces at New York’s Jazz at Lincoln Center, which occupies two floors of the towering Time Warner Center, and San Francisco theater consultant Len Auerbach, whose many projects include Carnegie’s Zankel Hall.

That was one of many concert halls and clubs the design team visited with Kline, who asked a lot of musicians where they loved to play, and why. Tenor saxophonist Joe Lovano — a former member of the sterling SFJAZZ Collective who plays with Chick Corea, Esperanza Spalding, and other stars on Wednesday’s sold-out gala opener — mentioned the ancient Roman amphitheater at Vienne in France, where the performers look right into the eyes of the people in the crowd, rather than over their heads from a raised stage.

That informed the thinking about this steeply raked hall, where no seat is more than 50 feet from the stage. The artists are sort of “embedded” in the audience, says the architect, who sought inspiration by visiting venerable New England meeting rooms and the Unity Temple in Oak Park, Illinois, designed by Frank Lloyd Wright.

“We want this to be a community gathering place around jazz.” – Randall Kline, executive artistic director, SFJAZZ

“After talking to Randall, I was really convinced we had to make a space that was not hierarchical,” says Cavagnero, walking through the hall last week to the sound of drills and sanders, “and that did not have an axial focus on the performers, with everyone else looking in one direction without any participation. Here, when you’re looking at the performers, you’re also looking at the audience. Because it’s steeply raked, you’re seeing people’s faces, and you’re part of the energy of the room.”

New Halls on the Rise

Miner Auditorium, with its cool gray and black tones, its matte wood floors, and its fine-lined walls and ceiling woven into a seamless whole, is the flip side of Stanford University’s dramatic new Bing Concert Hall, with its huge sculptural acoustic “sails” and sweeping lines (that hall sounded sensational when the San Francisco Symphony and others christened it on Jan. 11). Here, with the exception of a single canopy hanging over the thrust stage, all the absorptive and dispersive acoustical materials are hidden behind the subtle, gray-stained oak-slat surfaces lining the thick concrete box.

“We want the focus to be on the music. Nothing calls out to itself, except the performers,” says Cavagnero, an elegant minimalist whose previous cultural projects include the renovation of the Palace of the Legion of Honor in San Francisco and the Community School of Music and Arts in Mountain View. “There aren’t a lot of distractions.”

The mostly transparent glass and steel facade that wraps around the 90-by-90-foot square hall draws light into the lobbies, the new Southern-food cafe run by restaurateur Charles Phan (of Slanted Door fame), and the street-level Joe Henderson Lab. That’s the 80-seat performance and rehearsal space named for the late tenor saxophone giant who lived here and played often at the SFJAZZ-produced S.F. Jazz Festival. People walking and driving by will see the action inside the lab and the lobbies.

“We want this to be a community gathering place around jazz,” says Kline, a former bass player admired for his thematic programming and marketing skills.

He’s created a new programming model for the jazz center: four-night runs that give great musicians like bassist-composer Dave Holland, percussionist Zakir Hussain, and guitarist Bill Frisell the chance to explore various aspects of their artistry.

Holland, for example, will perform in a different context nightly Feb. 7–10. He plays a rare solo concert the first night; duets with the marvelous pianist Kenny Barron the second; performs with his acoustic quintet on the third night; and the last night leads his new electric quartet.

Those “residencies” will be mixed with multi-night performances by stars like Tony Bennett and the brilliant banjoist Bela Fleck, who plays solo May 16–19 and appears with Hussain and another boundary-crossing musician, bassist Edgar Meyer, on March 8.

Kline has been working like a maniac to ready the center for Monday’s ribbon-cutting, plus the two weeks of celebratory concerts that follow. After days of fine-tuning the sound with Berkow and his crew, he seemed almost satisfied.

“For what we’re trying to do in this hall with natural acoustics, it sounds better than I ever could’ve imagined,” Kline said. The musicians and audiences will have to judge whether he and his associates have hit their lofty mark, “but I think we’ve got a shot at it.”