Music is a holiday, so holiday music is a happily redundant idea: the chance to double your pleasure, double your fun, even without Wrigley chewing gum.

There are so many varieties of the genre under the main headings of concerts (instrumental and choral), dance, film, and multimedia that we’ll just touch on some of highlights. Besides the Messiah-Nutcracker conglomeration, here are some new and unusual items, as well.

A Multiplicity of Messiahs

There is news about the most traditional of holiday offerings as San Francisco Symphony brings back the Handel Messiah after a hiatus of three years. SFS Chorus Director Ragnar Bohlin conducts these performances. Tickets are likely to be in short supply because of pent-up demand. 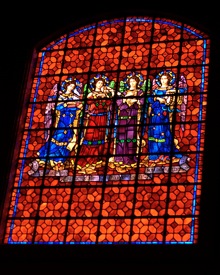 SFS is also offering John Adams’ El Niño, a retelling of the Christmas story, conducted by the composer, and featuring Jessica Rivera, Dawn Upshaw, and Michelle DeYoung, among others.

A different Messiah experience is the sing-along format, and San Francisco Concert Chorale will stage its own on Dec. 11, in the spectacular setting of Mission Dolores Basilica. John Emory Bush conducts; the soloists are Kaileen Miller, Lauren Groff, Arie Perry, Michael Beetham — and you, if you sing loud enough. Tickets: $10 in advance, $15 at the door (cash only), and a suggested donation for loaner scores.

Just one more Messiah, but not Handel’s: the Sanford Dole Ensemble will reprise Paul Ayres’ Messyah in a revised version, on Dec. 20, in the San Frnacisco Conservatory Concert Hall. This is an imaginative reworking of Handel, with themes and rhythms recast in various musical styles. It’s an enjoyable experience for both Handel veterans and neophytes.

A Trio of Nutcrackers and Other Holiday Dance Fare

Naturally enough, the top attraction locally is San Francisco Ballet’s Nutcracker. The company boasts America’s longest tradition of performing this classic (since 1944) and plans 30 performances in the 3,200-seat War Memorial Opera House, adding up to a potential audience total of almost 100,000, half of them children. It features great dancers who come from all over the world. You can watch holiday memories of their respective homes on the Ballet’s Web site. The company’s current production is by Artistic Director and Principal Choreographer Helgi Tomasson.

For a change of pace, try the San Francisco Lesbian/Gay Freedom Band, which presents its offbeat Dance-Along Nutcracker: At Sea! at the Yerba Buena Center for the Arts, Dec. 11-12. Tickets: $16-$25.

Smuin Ballet’s The Christmas Ballet, 2010 Edition runs Dec. 15-24, in the Yerba Buena Center for the Arts. It combines the late Michael Smuin’s neoclassic dances with pieces set to seasonal music, ranging from carols to Elvis to klezmer. Tickets: $20-$62. 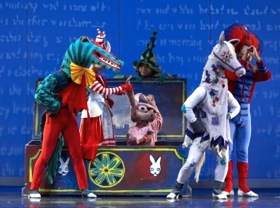 Especially for young children, Mark Foehringer Dance Project SF‘s Nutcracker tells the story in 50 minutes. Live music — which is increasingly rare in ballet — is by the Magik*Magik Orchestra, of graduating seniors from the S.F. Conservatory of Music. There are 20 performances, Nov. 27 – Dec. 19, in the Zeum. Tickets: $25.

ODC/Dance’s presentation of K.T. Nelson’sThe Velveteen Rabbit has its 24th annual edition, Nov. 26 – Dec. 12, in the the Yerba Buena Center for the Arts. A multimedia presentation, with recorded narration by Geoff Hoyle, the show has music by Benjamin Britten, costumes and set by Brian Wildsmith, and songs by Gina Leishman, sung by Rinde Eckert. Tickets: $15-$45.

If you expect holiday fun and ballet from the new 3D Nutcracker be advised: no fun and no dancing. Also, no mice, only rats — big ones — led by John Turturro as the Rat King. Andrey Konchalovsky’s British-Hungarian coproduction is a strange concoction, divorced from both E. T. A. Hoffmann’s 1816 story The Nutcracker and the Mouse King and everybody’s favorite 1892 ballet. It has Nathan Lane as Drosselmeyer, and as for Tchaikovsky, it features songs fashioned from melodies in his Fifth and Sixth Symphonies. The big musical moment is the theme from First Piano Concerto, sung by the workers as they storm their rat oppressors, with lyrics by Tim Rice, of Evita and various Disney projects fame.