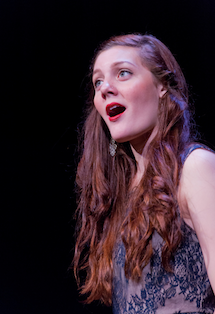 When we last spoke to Olivia Cosio, a year ago, she was explaining how she had been completely taken over by the character of Dido in a full-opera production of Dido and Aeneas put on by the Ruth Asawa School of the Performing Arts. “I feel like a lot of the emotions in the play are what we’re feeling every day,” she told us, referring to teenage angst.

Cosio, now 17, is in her last year at SOTA, and has become something of a celebrity in a school full of teenage wunderkinds. She has developed a formidable talent, with a large, sure voice as a mezzo-soprano, and a charismatic, even striking, stage presence. And now she has started making a name for herself.

In the last year she won the Jack Kent Cooke Young Artist Award. She came in first in the San Francisco National Associations of Teachers of Singing (NATS) Competition; took third place in the Hal Leonard High School Art Song Division; and was a semi-finalist in the Classical Singer Competition in Boston. And then, to top it off, she won a spot with four other performers on From the Top, the radio show hosted by Christopher O’Riley and devoted to promising young classical musicians. The program has an audience of 700,000 and is distributed by NPR. Cosio will be heard during the week of November 18. (Check local radio listings; the show is traditionally aired from 7 to 8 p.m. on Sunday nights.)

Such is the resume of a would-be diva who has begun to live a high-stakes life of gaining ever-greater recognition. And while other very talented students in the vocal department at SOTA enter competitions, Cosio makes that a focus.

“I spend a lot of my time looking for competitions and performance opportunities,” she told us the other day. “A lot of my friends are more into volunteering or exploring other music genres.”

Cosio, herself, is a volunteer and earlier this year joined the San Francisco Breakthrough Collaborative, which serves 5th to 8th grade students. She teaches a music course along with academic tutoring.

But her ‘real’ life has become, besides daily practice and voice lessons, the business of marketing herself. Which involves finding venues, filling out applications, preparing music, gathering recordings, writing essays, and publicizing herself where she can. Indeed, Olivia’s mother, Linda Cosio, sent SFCV a solicitation, wondering if there might be interest in a story about her daughter’s accomplishments.

The Most Competitive Year of Her Life

At the same time, Cosio has become focused on colleges. Her prospect list include Juilliard, Oberlin, the Curtis Institute of Music, the San Francisco Conservatory, the New England Conservatory, and the College-Conservatory of Music in Cincinnati.

Cosio says that this is definitely the most competitive year in her life, not only because of the extracurricular competitions but because, for example, so many of her classmates are applying to the same schools. Juilliard, for example, has 10 spots for singers, according to the school representative who visited SOTA recently. The talent pool is the world. Four students, including Cosio, are applying from the SOTA Voice Department alone.

Two years ago SOTA sent one student to Juilliard; another student was accepted last year but declined to attend.

And what’s the cost of such a life, however you might define ‘cost’?

Cosio is remarkably composed and poised, as you might expect. And she is lucky, and perhaps wise. Most of her friends are outside the vocal department. Her best friend is in theater; another in film; still another is a writer.

As for jealousy she said, “It’s definitely present, but you have to realize I’m not the only one receiving honors. We genuinely support each other when something great happens.”

“It’s slowly coming to me that my life is extremely rewarding.” -mezzo-soprano Olivia Cosio

Has she lost friends along the way because of her success? “I’ve lost some friends, but not because of this endeavor. Sometimes, we’ve just grown apart.”

And what about being a kind of celebrity? She gave a polished reply: “It’s exhilarating to be 17 and hold a lot of responsibility. It’s also difficult to balance the side of me that wants to have fun and hang out with friends and the side of me that knows I need to practice and apply for things. It’s sometimes been difficult to find that balance, but it’s slowly coming to me that my life is extremely rewarding.”

She even find practice rewarding. “I enjoy process and I feel that the more I understand the music, the more I enjoy practicing it. This year especially. Being able to relate to the texts of songs serves as a kind of therapy.”

The Most Personal Instrument

The conversation was drawing to a close. Later in the day Cosio was to sing at a benefit concert for SOTA. She had prepared an aria from The Barber of Seville, “Una voce poco fa.”

We asked about her character, Rosina. “She’s very charismatic and sassy. It’s fun to explore her character, because while she’s sweet and nice and kind, she’s also very smart; and you can’t mess with her. I find I can be inspired by this character.”

Partly in jest we suggested that perhaps Cosio is also someone not to be messed with.

With all of her recent success her future seems unusually bright. Where does she see herself in four years?

“I see myself singing, but I could also see myself teaching music. And even if I can’t sing professionally, I will always continue to sing — even if no one is listening.”

And then she returned to where we had met her, a year earlier, talking about the way in which singing can also allow you to detach yourself from who you really are, to escape. “Yes, I would say so. The voice is also very personal in that it can express emotion very easily: You can understand the emotion that someone is feeling when they’re singing, even if you can’t see them. I think that is really powerful.”

A few hours after the interview we received an email from Cosio’s mother. It read, “Hold the presses. Olivia just received a phone call from the YoungArts folks … She won! She will perform at the Miami concert in January.”