You’ve gone off to Europe to show the flag, and on the first night of the tour, at the Smetana Theater — named after Bedřich Smetana, the father of Czech music, and now housing the Prague State Opera — you’re playing along, and after the first movement of Beethoven’s Fifth Symphony there’s a smattering of applause.

That’s odd, you think. Why are they doing that? This is a sophisticated audience. Who knows this music better than the people of Prague? You glance out at the audience and, other than a gaggle of 20-somethings occupying the front rows, the audience is, as you’d expect, older (and, by the way, exquisitely dressed).

And then it occurs to you that, no, that’s no mistake, and there’s no lack of decorum; these people are simply enjoying this. In sum, you’ve arrived.

At the end of the evening, which includes Mahler’s Second Symphony, the ovation lasts 10 minutes, with curtain call after curtain call and no union clock marking each expensive 15-minute increment. Later, Music Director Michael Tilson Thomas goes off with the local royalty, literally and figuratively. “Guys, we’re doing it!” he will say later to his musicians.

On this magical mystery tour, everyone in the Symphony seems a rock star. Think of it: You’re a member of a California symphony playing Beethoven and Mahler — all Europe is on fire, marking the centennial of Mahler’s death — and you’re playing this music in the very halls and streets where those composers were born and lived and became icons. And you’re playing so well, with such precision and vitality, that the people jump to their feet to applaud (as they do even for Henry Cowell, the ultimate radical but also the ultimate musician of the Americas).

Audiences rise to cheer in Prague and in Vienna. And In Brussels, after Mahler’s Sixth Symphony, the audience claps in that characteristic but odd European unison. It would be akin to somebody from Prague coming to play at the Saint John Coltrane African Orthodox Church on Divisadero Street in San Francisco and parishioners thinking they’d heard a master: The scale is completely wrong but the effect is similar.

This is the way it is, sell-out concert after sell-out concert. At about $110 for a good seat in the orchestra, in a country where doctors make 1/20th of what they make in America and where musicians work three jobs to make ends meet. 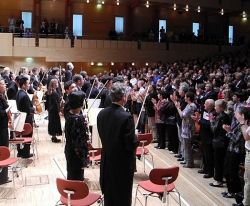 Here you are in the middle of the classical music hall of fame. And for this bright, shining moment, you are, as Robin Sutherland puts it, “the hot band.”

Sutherland has played keyboards with the San Francisco Symphony for nearly 40 years. “The camaraderie among the musicians [on the tour] is palpable,” he says. “The sense of history is undeniable. We look over our shoulders and it’s as though all these ghosts are watching.”

Which brings to his mind the last time the SFS came to Vienna. Two competing productions of Don Giovanni were playing at the time, and Sutherland remembers passing two chambermaids in the hotel hallway having a vigorous debate about which was better.

What was it that Mahler said to Sibelius? “The symphony must be like the world; it must embrace everything.”

That may be part of the realization — that everything has meaning, even the warm weather, even the cobblestones, deep in the mercurial and scarred heart of Europe: the atomic weight of history of a thousand years of culture. The honor of it all. And even (or especially) the military band playing in the courtyard, since Mahler loved those bands. It’s all a reincarnation away from the corner of Grove and Van Ness in San Francisco. And you think how lucky you are.

“In a landscape with the bleached bones of symphony orchestras,” as Sutherland puts it. “New Mexico [orchestra] in trouble. Honolulu [Symphony], defunct. Detroit’s on life support. Philadelphia’s in Chapter 11….”

Actually, Honolulu’s is starting up again. The union has agreed to $30,000 salaries, for two years, then a $1,000 bonus for the next year. But point taken. San Francisco Symphony’s situation is good, but it’s also lucky. You don’t want to jinx things.

“Right now, things are going our way,” Sutherland concludes. “But we don’t want to get smug. We have to stay on top of our game. We have to practice carefully, rehearse with ears open, and try like hell to avoid getting in a rut. Every minute we can play is not a gift, and yet it is a gift. I never take it for granted.”

SFS violinist Leor Maltinski relates this anecdote from the tour. He wants to buy another bow for his instrument so, before leaving for Europe, he calls Daniel Schmidt in Dresden, the son of C. Hans-Karl Schmidt and heir to a 200-year-old family tradition of violin- and bow-making. Could Daniel make him a bow? No: Regrettably, there just isn’t enough time.

“I completely understand,” says Maltinski, “but then might your father have a bow to sell?”

Schmidt is nearly a brand name, particularly in Germany, which is second only to France in bow-making prowess. Indeed, the French would have you believe that the “Stradivarius of the bow” is François Xavier Tourte (1747–1835) — a “stick” designer extraordinaire and the first, or among the first, to use pernambuco wood.

The wood, also known as Brazilwood, is from the pea family and has a special property, beyond its orange-red luminescence. The wood can be heated and then shaped. The only problem is that over the last 200 years the wood has become nearly extinct in those places where it once thrived and is now on the endangered species list. The situation is so bad that bow-makers are gradually resorting to carbon fiber instead.

But good news comes for Maltinski: Hans-Karl does have a bow to sell. And so one day the American travels from Prague to Dresden to pick it up. He arrives at the store with Daniel only to find that Hans-Karl, now in his 70s, is off playing tennis. (In the winter, he’s a ski instructor.)

But then the father arrives, the son leaves, and Maltinski makes do with what little German he speaks, though at this point there’s really nothing to say. The bow is magnificent: engraved, gold mounted, inspired by a design from the 19th-century German bow-maker Heinrich Carl Knopf, and strung with Mongolian horsehair.

Afterward, Hans-Karl takes his American visitors on a tour of Dresden, to show them how the reconstruction is going, 65 years after the end of World War II. He points out some original stones that went into all the churches and the opera theater, destroyed in two nights of allied bombing. No significant military targets were hit, though 25,000 died in the firestorms (mostly women and children).

And then there was the more nuanced destruction during the period when the city was in communist East Germany. But no matter. The city of Saxon kings, once known as the “Jewel Box,” can still yield up a violin bow engraved in gold.

On this European tour, the revelations are unexpected. For example, all the musicians are affected by the small stages — “small as hell,” as Sutherland remarks. The instrument trunks are set out in the street. The double basses have to play without stools. Everyone seems on top of one another.

“The first thing you notice is how sound washes over you,” says Nicole Cash, assistant principal hornist. “And so you need to be less aggressive than at home. You have to try to be very clear, be mindful of note length and articulation, and listen very carefully.”

It occurs to her that, when European symphonies come to San Francisco and play in a much larger venue, perhaps they seem as if they’re not filling up the hall; sometimes the sound they produce seems dry and detached. And now, having played in Europe, she can understand them better and appreciate them more. “I realize that we don’t always have a clear understanding of each other’s talents.”

Her colleague Steven Dibner, the assistant principal bassoonist, writes this about the tour: “Although I always wanted to be a dad, my dream didn't come true until I adopted a baby boy from Guatemala as a single father in 2006. My son, Pablo, is now five and a quarter and always accompanies me when I travel.

“In years past on S.F. Symphony tours, I was known as ‘Mr. Adventure,’ using every minute of free time for exploring the cities we visited. Somehow I managed to show up prepared for all rehearsals and concerts, and felt that I brought to our music-making the joys from digging deeply into local cultures.

“Things are very different now,” Dibner notes. “The first stop after checking in to each hotel is obvious: to see if there’s a swimming pool. Otherwise, a quick stop at the concierge desk directs us to the nearest ‘Kinderspielpark’ or ‘parco per i bambini,’ as the case may be. My son is the smell-every-flower-along-the-way type, so getting from point A to point B can be time-consuming. With that in mind, on this trip I decided to devote the necessary room in our luggage [allowance] for his three-wheeled scooter and helmet.”

The last word comes in an e-mail received last Saturday from Cash, the hornist: “We are now in the most grueling part of the tour where we stay in each city for only one or two nights, so we are all kind of reserving our energy, putting our noses to the grindstone, and looking forward to a longer stay in Paris.”

When there’s time for the San Francisco Symphony musicians to reflect, what an experience it will have been.