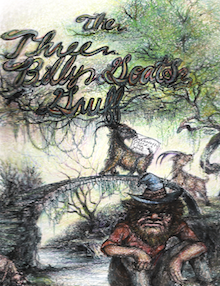 As public school arts and culture programs have disappeared, the private sector has come to play an ever more intensive role in filling the vacuum. Opera San Jose is at the forefront. And now, Education Director and Artistic Administrator Matt Siek has put together a terrific program for K-5 children.

It's The Billy Goats Gruff, set to music by comic masters Mozart, Rossini, and Donizetti, and it debuts Nov. 1 at the Dr. Martin Luther King Library in downtown San Jose. Director John Davies' production incorporates a timely anti-bullying message into the timeless tale, which gives it a little more interest than the run-of-the-mill opera intro for kids.

Siek's adult outreach program also addresses the needs of older children and includes master classes conducted by singers from the opera’s residency program. But that has become so popular that he’s had to hire local singers, secondary role players, for example — all adults — to staff K-5 performances like Billy Goats Gruff.

In the past, the company has done Hansel and Gretel and The Magic Flute, but this year Siek wanted to do something different. “We decided to have a message behind it. I thought we needed more than just opera, something that would pull kids in for more than just the singing and the costumes.” The Billy Goat Gruff program lasts 35 minutes plus 10 minutes of questions and answers, and is scheduled for a dozen performances around San Jose.

BUT this is a program that could be played anywhere. So, if you were a PTA parent or principal, or were running a program somewhere in the Bay Area, Siek might be able to arrange a performance. You might also be able to schedule a performance at a birthday party or some private event. Cost is about $500. The company includes four singers plus a player on keyboard, which they bring. It requires a minimum space of 20 by 30 feet, bigger than most living rooms. But you see the possibilities. Go to operatales.com for more information about this mini-opera. For more information about Opera San Jose outreach, contact Elizabeth Santana at [email protected]