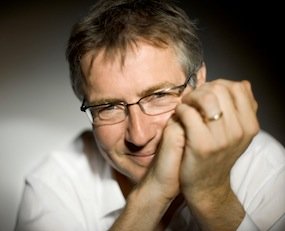 Here’s the postmodern life of an English maestro: He’s just back from Basel and Leipzig. Catches a breath. Plays full-on dad with the children, talks to his wife, gazes at the cherry blossoms in the garden. Invites people down from London to talk about how the arts are being undermined by uncultured politicians, and shakes his head.

Then back in the cab to Heathrow. The transition from familial tones to orchestral ones is prestissimo, and you cannot play both at the same time. “Have a pleasant trip, Mr. Goodwin.” And before you know it, North America looms off the starboard wing.

Paul Goodwin is coming to California to begin directing the 74-year-old Carmel Bach Festival, which runs through the month of July. The oboist extraordinaire turned conductor is now the “energetic master of gesture,” well-known for his interpretations of Baroque music.

But he’s also known, to himself perhaps, for his love of both “ancient” and contemporary music. He appreciates musical nuance and the endless weave of the arts through the centuries.

I reached the conductor by phone late one evening in his home, west of London, along the Thames in Surrey. He was in his home office, which overlooks cherry and apple trees in a garden long enough to be “a pretty pitch” for his three young children. Beyond the garden lies an enormous deer park.

Through the oboe I had a reputation with promoters and concert halls; I could put “bums on seats.” But then, of course, the proof is always in the pudding.

Goodwin, now 55, was born in Warwick, south of Coventry along the River Avon. When he was still young, the family moved, and he was accepted into the choir at Temple Church, in the middle of London. He was treated as if he were a sports prodigy — like a “performing monkey,” as he puts it. The choir was his introduction to the life of musical celebrity.

At the University of Nottingham, Goodwin studied composition and took up the oboe on the side, playing contemporary music. But then he was “seduced by elements of the Baroque,” he remarks. He became one of the first oboe players in modern Britain to specialize in early music, and he also learned a great deal about historical instruments.

In 1996, he gave it all up to conduct. “The progression was like a ballet dancer becoming a choreographer. Through the oboe I had a reputation with promoters and concert halls; I could put ‘bums on seats.’ But then, of course, the proof is always in the pudding.” Goodwin developed his conducting style through his study in Helsinki with Jorma Panula, whom he calls “the maestro of the maestros,” the “hidden hand” who has trained a generation of conductors. “He was the perfect teacher for me because he was interested in people who were musicians, rather than conductors coming out of school.” And now his conducting journey is leading him to Carmel.

Goodwin, a lover of musical dialectics, is well-aware of the challenges involved in producing a program that speaks to a variety of audiences. “I was chosen,” he says, “to keep expanding the direction set by Bruno Weil [the previous, longtime director]. But it’s a tightrope: to keep the traditions of the Festival, on the one hand, and on the other to shake things up to appeal to a wider spectrum of audience.”

For me, the great conductors are the great magicians.

He is stepping boldly into his first season, including a blend of cross-genre programs — Stephen Prutsman (who presents a “Bach, Jazz, and Beyond” concert), for example, and Joe Lovano, the great jazz saxophonist.

There are Bach novelties, as well. Goodwin will open the Festival with his own suite of Bach’s sinfonias, including instrumental movements rarely heard. He will also introduce the first Carmel commission, a new arrangement of Fancy on a Bach Air by American composer John Corigliano, inspired by Bach’s Cello Suites. Other offerings are more traditional: The St. John Passion receives two Festival performances; Concertmaster Peter Hanson leads the Festival Orchestra in 18th-century music for strings, including that of C.P.E. Bach; and Andrew Arthur will continue his survey of Bach’s organ works with Fantasia and Fugue in G Minor, BWV 542, plus another concert of smaller organ sonatas and harpsichord works.

Goodwin is still unabashedly seeking thrills from music, and he wants to communicate that sense of wonder to the audience. “For me, the great conductors are the great magicians. It’s when you are able to persuade the orchestra that they and the conductor are aligned, that there is symbiosis at play, that what they want to do is what the conductor wants to do.

“And, for the audience, you want to take them on a journey, and of course at the same time it’s a show, and your gestures and energy are very important. But, of course, you have your back to them. That’s the shock of being a conductor, as opposed to being an oboe player who is looking into the audience, who has this extraordinary catharsis with the audience. As a musician you feel like you’re in charge of a whole set of controls. It’s a very direct thing.

“But as a conductor you’re away from it, you have your back turned, you are the magician doing all these things; you’re looking at the audience through the eyes of the musicians. Not unlike driving by looking in the rear view mirror.”