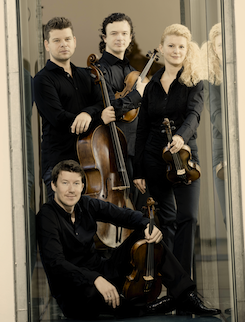 An ensemble of young, but already acclaimed Czech musicians returns to Herbst Theater on Nov. 13 with the intent to keep conquering San Francisco Performances audiences.

Formed only 10 years ago, the Pavel Haas was named in honor of the Czech Jewish composer who died in the Auschwitz concentration camp, leaving behind important compositions, including three string quartets. Almost immediately, the quartet started winning awards and international competitions, going on a tour of 40 concerts on three continents.

Signing an exclusive recording contract with Supraphon, the Pavel Haas Quartet issued CDs of Janácek's and Prokofiev's works, receiving special recognition of its Dvorák CD last year, including a Gramophone Award and Recording of the Year.

Of the Dvorák CD, Michelle Dulak Thomson wrote in SFCV:

The Pavel Haas Quartet plays the absolute living heck out of [the G-Major Quartet Op. 106]. You'd have to hear other performances to know how good this one is. There is, for example, a strange interlocking ostinato between the viola and cello early in the Scherzo. It always sounds like two dogs fighting over a bone — except here, where for once you can hear it as a substratum and pay attention to the violins dueling over it.

The Cleveland Plain Dealer music critic Donald Rosenberg has hailed the quartet's work, writing that "From the softest details to passages of exuberant virtuosity, they revealed the concentration, unity, and expansive expressivity that are hallmarks of their art."

At the Herbst concert, two major German classical works bracket a gem of Czech chamber music, Janácek's 1923 Quartet No. 1, named the "Kreutzer Sonata," in reference to Tolstoy's novella and the inspiration for the book, Beethoven's Violin Sonata No. 9, also known as the Kreutzer Sonata.

Thwarted passion is at the heart of the Janácek, the older, married composer's yearning for a young (and also married) woman, Kamila Stösslová. (Janácek Quartet No. 2, "Intimate Letters," is the musical depiction of the love letters he wrote to Stösslová.)

The program opens with Brahms' 1873 Quartet in A Minor, Op. 51, No. 2, one of the composer's most lyrical and amiable works, with a tempestuous dance finale.

Beethoven's mighty 1826 Quartet in B-flat Major, Op. 130/133 takes up the second half of the concert. Running about 50 minutes — twice the length of some works in the genre — it consists of five moments and the concluding Grosse Fuge, a complex, difficult fugue, famous for its extreme technical demands and unrelentingly introspective nature.