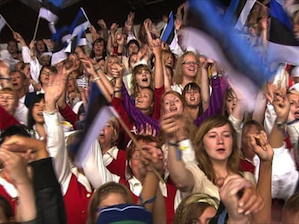 At the center of the film is the Laulupidu Choral Festival, the world's biggest, held every five years, drawing 30,000 singers and more than 100,000 listeners. The Tustys have made a new documentary, To Breathe As One, which explores the 2009 festival through the eyes of the Piedmont East Bay Children’s Choir, participating in the last event.

The film, scheduled to air on KQED-TV, ch. 9, on July 5, shows the extensive preparations as the youngsters — under Robert Geary's direction — learned difficult songs, all in Estonian, and performed in the Tallinn concerts. July is also when the next Laulupidu Festival takes place, and the Piedmont choir is heading back to participate again.

The documentary's Estonian title is a word with the dual root of breathing and soul. The importance of the festival is based on both the country's devotion to choral music and its tortured history. First occupied by the Soviets in 1939, then by the Nazis, and then by the Soviets again, Estonia lived through decades of brutal subjugation. By the end of World War II, more than a quarter of the population had been deported to Siberia, executed, or had fled the country. Choral music helped sustain the people during those years, allowing the use of the Estonian language that was otherwise forbidden by Moscow. Liberation came with the struggle known as the Singing Revolution.