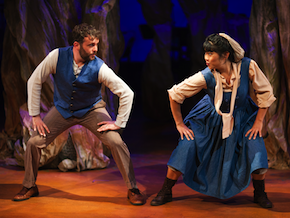 All of the high expectations for San Francisco Playhouse's production of Into the Woods were met at the Sunday matinee, and concerns about the possibility of stage director Susi Damilano taking liberties with Stephen Sondheim's musical alleviated. The show has an exceptional — and welcome — long run, through Sept. 6, and it's highly recommended.

An important addition — that of 11-year-old Ian DeVaynes as The Boy — works well, while doubling the Wolf is a minor, unnecessary change. Damilano has given a body to Sondheim's central story idea of the Baker and his wife having a child, but instead of just toying with the work, she then turned the role without lines into an all-purpose presence and energetic stagehand.

Will the fifth-grader transplant from Brooklyn manage to be on-stage through three-hour-long shows six or seven days a week until school starts? Apparently yes, probably setting up a Guiness entry.

Above all, the production's — and Damilano's — achievement is to master the basics: diction, clear story-telling, an excellent cast. Dave Dobrusky's unseen band upstage played well, mostly maintaining the right balance. I wish the Playhouse had stuck with its no-amplification policy because this time the electronic sound is evident, and while not excessive, the slight echo is perhaps the only negative about the production. 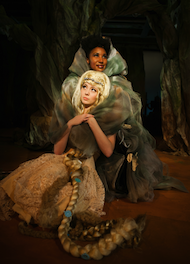 It's delightful to see El Beh's Baker's Wife — her youth makes much more sense in the role that the customary middle-aged actors, no matter how famous. Also, as already seen in other shows (most prominently for me as the bizarre Cellist in Bloody Bloody Andrew Jackson), there is something powerful and natural about her acting and singing, truly bringing the role to life. (Why no other name than the Baker's Wife? Sondheim might have thought that if the Dyer's Wife was good enough for Richard Strauss in Die Frau ohne Schatten, what the heck.)

El Beh has an excellent foil in Keith Pinto, as the initially clueless but slowly evolving Baker (progress in relationship values, not baking expertise) — a self-effacing, well-sustained performance. Tim Homsley's Jack is similarly bland-to-star, as the occasion warrants.

No such trajectory for Safiya Fredericks, whose Witch comes in and leaves big, as the role dictates. Fredericks has no problem being dramatic and dominating from beginning to end.