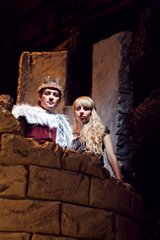 The little engine of San Francisco Playhouse always could, but now it has gone into the world of thespian gigantism.

Before the first note of the Lerner and Loewe Camelot was heard at Friday's premiere, Playhouse already scored big. In the company's small, new theater on Post Street (this is the first season in the 250-seat venue that replaced the previous 99-seater), a wondrous scene greeted the audience.

Nina Ball's Broadway-worthy set featured ramparts here, a castle there, a gigantic tree on stage left. And then, on a screen taking up the entire upstage wall, there is live video of the band, later projections of scenery, and then and then: Those big, impressive sets turn to reveal new settings.

With such great toys, it would be understandable (and wrong) to use them all the time, but company manager and stage director Bill English knows better, and he uses the screen and the revolving sets judiciously, instead of going to town with them. Because of that, properly and joyously, the audience is treated to a bouquet of appealing performances from an excellent cast. 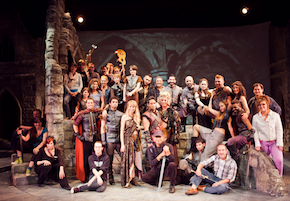 Just as English worked wonders with another Lerner and Loewe masterpiece, My Fair Lady, he is presenting his own gritty "Camelot meets Game of Thrones" version of the original Moss Hart production.

The director also imported his Henry Higgins — Johnny Moreno — as King Arthur, Eliza Doolittle — Monique Hafen — as Guenevere, and Alfred Doolittle — Charles Dean — as the scene-stealing Merlyn and Pelinore ... and the cast of an additional dozen for this Really Big Show.

Moreno and Hafen looked way too young for the My Fair Lady leads, but they were quite mahvellous, and as juvenile Arthur and Jenny, they are repeating their triumphs, both in acting and singing. Moreno sounds wonderful in "I Wonder What the King Is Doing Tonight," "Camelot," an almost whispered "How to Handle a Woman," as well as other songs, and duets.

Hafen's "The Simple Joys of Maidenhood" is hilarious, "Then You May Take Me To The Fair" captivating,  and "I Loved You Once in Silence" moving. To their credit, both provide exemplary diction, even against capricious amplification.

Sound is even a bigger problem when it comes to the band, led ably by Dave Dobrusky at the keyboard. There is a distinct separation between singers and accompaniment, the band's sound coming from a distance and a beat behind. Still, the performance is fine, so after a while the ear makes adjustment what seems to be a permanent echo.

Wilson Jermaine Heredia dazzles by making the cartoon character of Lancelot believable. Heredia and fight choreographer Miguel Martinez were awesome in Lancelot's sock-'em-rock 'em scene against three meanies and the subsequent "miracle" that wins over hearts (with disastrous consequences) and minds.

Heredia's "C'est Moi" and "If Ever I would Leave You" make a big impression from a singing actor (not a singer who acts). Steven Shear's choreography for the show works well with English's direction on the complex stage.

In another principal role, the latecomer villain Mordred, Paris Hunter Paul joins the honor list, with much virtual mustache-twirling and scary-funny belting out of "The Seven Deadly Virtues."

The company succeeds in bringing to life the musical's powerful romantic spirit, etched mem>orably against doubts, sadness, and resignation. The remarkable score for Camelot sounds deceptively simple, but it is a challenge, especially for a theater company whose main business is drama, not music. Playhouse meets the challenge with impressive panache.