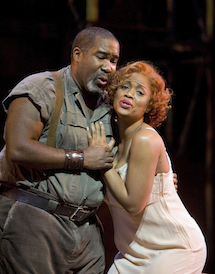 The same production of what is legally and necessarily called George and Ira Gershwin’s Porgy and Bess shown at the Kabuki will now also be available beginning March 25 on a DVD/Blu-ray recording, released by EuroArts Music International.

Eric Owens and Laquita Mitchell turn in memorable performances in the title roles, John DeMain conducts, and Ian Robertson's SFO Chorus is at its rafters-shaking best. The production is by Francesca Zambello, originally for the Washington National Opera.

In a way, this version of the opera is coming home to Gockley, who originated it in 1976 (yes, 38 years ago), near the beginning of his eventually 34-year leadership of the Houston Grand Opera. After years of the work's presentation as a musical, this was a complete restoration of the Gershwins' original. It opened in Houston, and then on Broadway, going around the world, and recorded by RCA Records.

It marked the first time that an American opera company performed the work, not a Broadway or other musical troupe. It was based on Gershwin's original full score and did not incorporate the cuts and other changes which Gershwin had made before the New York premiere, nor the ones made for the 1942 Cheryl Crawford revival or the 1959 film version.

DeMain conducted then as he does in this SFO production that's now on DVD and Blu-ray. The production in 1976 won the Houston Grand Opera a Tony Award — the only opera ever to receive one — and a Grammy Award.

Porgy and Bess is the third DVD/Blu-ray release in San Francisco Opera’s collaboration with EuroArts Music International and Naxos of America, after Jake Heggie and Gene Scheer’s Moby-Dick and Donizetti’s Lucrezia Borgia.