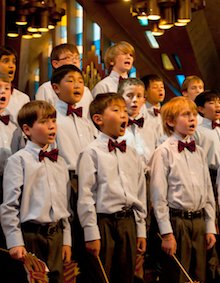 It’s not news that boys in America are starting puberty earlier than in previous decades — about two years earlier according to various studies, including a 2012 study by renowned child psychologist Marcia Herman-Giddens. The age, for boys, is now around 9 or 10; for girls, around 8 or 9. Even 7 is, apparently, not so unusual for girls.

But what is news, at least to audiences, is how this change is beginning to affect boy choirs. Note the recent The New York Times Sunday Magazine article titled “Where Have All the Sopranos Gone?: The ever-earlier onset of puberty is reshaping the legendary Leipzig boys choir.” And, some might add, reshaping it not entirely for the better.

The piece is about the St. Thomas Choir Boys Choir of Leipzig, a boarding school which opened in 1212 (801 years ago) and serves 92 boys 9 to 18 years old. Johann Sebastian Bach was the director of the school from 1723 to 1750. The repertoire stretches from the Renaissance to contemporary music. In Bach’s time, the choral prefects (head boys) were usually 17 years old.

The dread reported in the article is that puberty may drop so far that it will become impossible to recruit boys who have both that ever-so-precious, nearly indescribable ability to soar, as well as the simple maturity, the virtuosity that comes with training, to sing the likes of Bach. Although of course feeling the music, even understanding it, may be of less importance than just being able to produce the sound, that timbre that’s crushed the morals of priests, inspired the building of the world’s greatest cathedrals, and turned atheists to people of faith.

It may be that the day of the ‘boy choir voice’ is slowly passing, to be replaced by some other representation of purity.

But it may be that the day of the ‘boy choir voice’ is slowly passing, if only because of the evolving nature of androgens and hormones, to be replaced by some other representation of purity. As choral director Robert Geary put it, referring to the magic of the boy soprano tone, “that thing that seems to happen in spite of the child, there’s no emotional connection, something that just flies out, disembodied and fantastic.”

The Times article has drawn a variety of responses among local choir directors. We asked around.

“In my experience,” says Joyce Keil, artistic director of the Ragazzi Boys Chorus, “puberty has not dropped significantly. Most boys’ voices still change around 11 or 12. Maybe, there’s a one year difference.”

Keil says the warning signs include hoarseness or breathiness and a weaker voice. And she notes that the process can be very disorienting. “I would say the difficult part of the transition lasts a year or two, but finding where the voice is going to settle may take four or five years. One of the most traumatic things that can happen is when the voice drops, you lose the upper range. That’s hard, because it’s difficult to find music in that range.”

“I would say the difficult part of the transition lasts a year or two, but finding where the voice is going to settle may take four or five years.” - Joyce Keil, artistic director, Ragazzi Boys Chorus

She tells the story of a boy whose voice didn’t crack but he was no longer a treble. As a result, his whole identity as a singer came apart. “When he couldn’t control his voice he went into a depression. Suddenly, he was thinking, but this is who I am. I got older boys to talk to him and help him through the change. He’s now moved on to the men’s chorus, and is now very pleased with his voice.”

Keil recommends Martin Ashley’s 2009 book, How High Should Boys Sing, as a valuable resource for both parents and professionals. “He makes the case that a boy’s treble voice is most full and has the greatest richness of overtones around the age of 11 to 14, which is what we call the ‘boy choir voice’ — distinguishable from the ‘child voice.’ Although the speaking pitch is dropping, the trained singer can make the fine muscle adjustments to sing in his treble voice. Ashley also disagrees that the boys should stop singing during this stage. From age 13 or 14 on, the boy begins to be more comfortable singing in a lower range, although he can often continue to sing in what is now a light tone through the high notes.”

Taking Care of the Instrument and the Musician 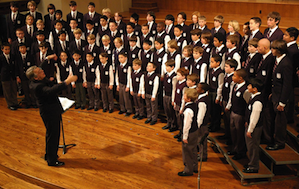 “Yes, voices have been changing a little sooner,” says Ian Robertson, artistic director of the San Francisco Boys Chorus for the last 16 years. “We realize it’s happening and there are various technique to deal with that. We might ask them to sing the lower parts, second soprano, for example. And if it’s time to go on there is a graduate chorale.”

Robertson points out that the SFBC doesn’t sing as much as the St. Thomas choir, about four hours a week. “We’ve very conscious that there should be no strain or discomfort and so we’re constantly monitoring it ….”

Jimmy Kansau, vocal director of the San Francisco Boys Chorus, felt the approach of the St. Thomas Choir to boys whose voices had changed was a little “radical.”

I was put off by the way they seemed to get rid of boys whose voices had cracked. It was certainly very different form the way we handle that situation. Our approach is to help the ‘head’ boys psychologically and to prepare them for this change, in which they’re going to gain notes in one register and lose notes in another. We want to make them aware of what’s going on, give them insight and also the tools to help them work around the change. My impression from the article was the (St. Thomas) choir disposed of singers no longer able to sing certain notes.

Kansau says that he is always careful to explain to singers when they first join the chorus that at some point their voices will change and they should enjoy the singing quality they possess in the meantime.

For ‘star boys’ who become caught up in their fame, singing with the symphony or ballet, Kansau notes, “Generally, boys adapt to the situation but we had a couple of ‘star boys’ who weren’t able to manage their instrument very well when this happened. And why? There were various factors — what was going on at home and at school, for example, and so we ended up coaching them, because they were very hard on themselves. But that taught us a lesson.” 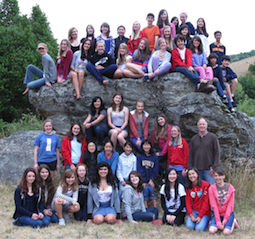 By the same token there have been instances, says Kansau, where singing in the chorus has led boys to be bullied at school, particularly after their voices have changed. “They sing in a talent show, for example, and the other kids obviously think it’s a weird sound, because it’s not pop music and they haven’t been exposed to it. So we’ve encountered that as well.”

“Many people don’t realize that girls’ voices also change, “ notes Susan McMane, director of the Young Women’s Choral Project. “It’s not an octave difference, but the voice gets kind of breathy and most girls can sing right through that. The one other change is that girls’ voices seem to be getting stronger earlier. We have some seventh and eighth grade girls that are unusually strong. But no question that girls are maturing quicker. The behavior of fifth and sixth graders is much more teenage like than it used to be.”

Robert Geary, artistic director of the Piedmont East Bay Children’s Choir for more than 30 years, says there’s no question that puberty is having an effect on the composition of choirs, on repertoire, on expectations, and on the broader question about the future of children’s choirs. He, for one, believes the future involves the increasing appeal of mixed choirs.

“It used to be that boy choirs would sing entire programs devoted to the treble voice. Now it’s very rare not to have tenors and basses as well.”

The Piedmont East Bay Children’s choir started out as a boy choir in but a year later started a girl’s choir. “By mixing them at the upper levels,” says Geary, “we achieved a much higher level of artistry. It brought both strength and character.”

Moreover, Geary points out, boys around the age of 11 and 12 are emotionally immature and girls that same age bring a certain emotional depth that a boy can’t bring.“If you think of the music Bach wrote, much of it is virtuosic and it’s pretty hard to get a 12-year-old to sing at that level. Not to mention issues of emotional interpretation.” -Robert Geary, artistic director, East Bay Childrens’ Choir

As for the question of where to place the new and ever changing intersection of the boy choir voice and the need for virtuosity, Geary believes this is becoming ever more important, and is one of the advantages of a ‘mixed’ choir. “If you think of the music Bach wrote, much of it is virtuosic and it’s pretty hard to get a 12-year-old to sing at that level. Not to mention issues of emotional interpretation. This is less true with Baroque than Romantic but still … On the other hand, you can ask a 17-year-old to do it.”

While there’s a wealth of historical repertoire for boy choir voices, it’s increasingly difficult to acquire these kinds of treble voices and get them trained well enough to perform at a high level, in a relatively short period of time.

What does the future hold? For those in the culture of the boy choir, little change is expected. Or needed. The audience is eternal and there is a ready supply of singers, including a yearly supply of sopranos. Moreover, it would seem all choirs these days take great care to bring young voices through the trials of puberty. But there may be a question of how boy choirs can evolve and flourish given the limitations of musicianship, and the growing appeal of contemporary expression.