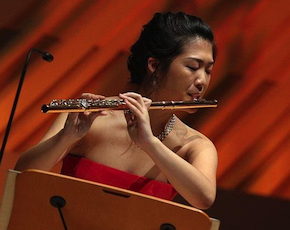 Flutist Annie Wu, an 18-year-old senior at Foothills High School in Pleasanton, was named a Presidential Scholar in the Arts by U.S. Secretary of Education Arne Duncan. She is one of six Presidential Scholars from California in both academics and the arts.

The other two Californians selected for arts scholarship are Gabriela F. Campo of Glendale and Angela T. Francis of Los Angeles.

Wu's teacher, Opera San Jose principal flutist Isabelle Chapuis, was cited by the White House Commission as Annie’s "most influential teacher." Chapuis says "I first auditioned Annie when she was 12. Within a few minutes, I knew she was that one-in-a-million talent that every teacher dreams will one day appear on her doorstep."

Just last week, Wu was admitted to a five-year dual degree program at Harvard University and the New England Conservatory of Music. At completion of the program, she will receive a bachelor’s degree from Harvard and a Masters in Music degree from the Conservatory, where she will study with virtuoso flutist Paula Robison.

Wu has appeared as soloist with many Bay Area orchestras and ensembles, including 11 performances of the finale of Jacques Ibert’s Flute Concerto with the San Francisco Symphony on Family Concerts. After she won the Diablo Symphony’s 2012 Concerto Soloist Competition, she performed the entire work by Ibert with that orchestra twice, under the direction of Music Director Matilda Hofman. She has also performed with the San Jose Chamber Orchestra. Last year, Annie she was selected as flutist in the inaugural season of the National Youth Orchestra at Carnegie Hall.

The young flutist has performed as a soloist with the Vienna International Orchestra under the baton of Michele Santorsola. Her solo work in Mozart’s Flute Concerto No. 1 in D Major, and the encore of Greg Pattillo’s Three Beats for Beatbox Flute were received with ovation.

The 2014 ceremony will be held on June 22, when each honoree will receive a Presidential Scholar Medallion. On June 23 at 8 p.m., the Scholars in the Arts specializing in dance, jazz, theater, music, and voice will participate in "A Salute to the U.S. Presidential Scholars," a free public performance that celebrates all of the awardees, directed by Tony Award-winner, dancer, choreographer and YoungArts Artistic Advisor Bill T. Jones at the John F. Kennedy Center for the Performing Arts Concert Hall. The performance will be streamed live on PBS' Facebook page and YoungArts' website.