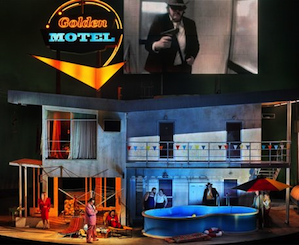 Apologies, but by the time you read this Die Walküre at the Proms is nearly over, having started at 8 a.m. PDT. You should have heeded notices in previous columns. To look ahead, Friday's Siegfried will also start at 8 a.m. our time, and the world ends Sunday with Götterdämmerung (or, coming from London, The Twilight of the Gods).

And, here's something you won't see — or rather hear — in any opera house anywhere: On Saturday, the daylong break between Siegfriedand Götterdämmerung, BBC-3 will bring you live from the Royal Albert Hall Tristan und Isolde, that too waking you on the West Coast at 8 a.m.

The curtain rose on a sleazy roadside inn along Route 66 called The Golden Motel. The stage swiveled to reveal a Texaco petrol station and a convenience store/bar. The flag and emblem of the Lone Star State put to rest any doubt about where we were supposed to be.

Stick with the Proms; the pictures are better on the radio.