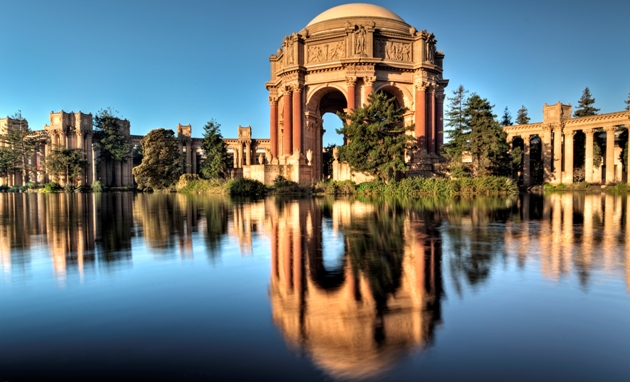 Late Friday Afternoon (on the day Palmyra and its ancient ruins fell to Islamic State) the flag came down on the second leg in the great race to see who will re-establish the glory of the Palace of Fine Arts — that most gorgeous faux Greco-Romanique ruin. It was designed for the Panama-Pacific Exhibition of 1915, by Bernard Maybeck, who once noted that the ruin was meant to suggest in Ozymandian fashion, “the mortality of grandeur and the vanity of human wishes.”

Last year, the city’s Recreation and Parks Dept., which manages the site, invited requests for proposals (RFPs), which were due end-of-day Friday, May 22. Three finalists will be chosen to submit more complete proposals, which are due in September. The winner will be announced in November. Lease negotiations will then begin, with lease approval scheduled for April, 2016.

Originally, the Palace was an art museum, and, following the exhibition, saved from smithereens by Phoebe Apperson Hearst, who always saw the place solely as an artistic monument. Yet, from 1934 to 1942, the palace became a tennis club, and then a motor pool and then a storage depot, and after World War II, a genuine ruin. In 1964, it was gutted and rebuilt. In 1969, the Exploratorium science museum took up habitation, which ended in 2013 when the Exploratorium moved to the Embarcadero. The space includes both a vast cavern of exhibition space and a theater that seats 1,000.

More than 40 organizations sent representatives to pre-bid conferences over the last six months. Prospective tenants include a restaurant group; an employment agency; and Hornblower Bay Cruises along with the current tenant, Hangar1, which is paying $42,000 a month for the pleasure. Architects and designers with interest include HOK and Skidmore, Owings and Merrill LLP. The Bay Club and the Academy of Art also have shown interest and, according to rumor, are serious competitors, although a public spokesperson for the Academy of Art said he was not aware of any proposal in the works.

Center for Global Arts and Cultures

Among the arts organizations interested in the space is World Arts West (WAW), an epicenter for more than 450 dance companies in Northern California, and best known for The San Francisco Ethnic Dance Festival. The executive director, Julie Mushet, is a long time leader in the arts community, and has gathered together some of the most accomplished arts consultants in the country to weight her pitch for the Palace. The group includes Marilyn Bancel, a director with the Oram Group and an authority on capital campaigns; Eddy Orton, head of the Orton Development Company; and Mark Heiser, recently appointed to head the Palace of Fine Arts League, which incidentally was founded by Phoebe Hearst. Heiser is formerly managing director of the David H. Koch Theater at Lincoln Center. A fifth team member is restauranteur Alice Waters.

A principal advisor of the group is Robert Cole, the noted impresario and arts "guru", who ran UC Berkeley’s Cal Performances for 20 years, between 1990 and 2010, and transformed it into one of the great performance venues in the country. Since then, he has been a consultant to the Sonoma State’s Green Music Center and the Lincoln Theater in Napa.

A Matter of Size

The other day Cole talked about the appeal of the Palace as a performance space, noting that the theater offers 1,000 seats, which could easily be increased to 1,100, which, with the proposed improvements would make it the most versatile, modern performance venue in the city. By comparison the Herbst Theater has just over 900 seats but a small stage. The Yerba Buena Center for the Arts holds only 750 seats. Moreover, availability has become an issue since Yerba Buena has become closely tied to the various tech conventions held at the Moscone Center.

“There’s no theater in San Francisco of adequate size,” said Cole, “certainly not big enough for dance companies such as Alvin Ailey, Mark Morris, or the Bolshoi. That’s one reason I was able to bring them to Zellerbach, which has 2,000 seats. Sometimes, that can be too big but it’s always doable. In San Francisco, there is just no place with that kind of capacity.”

"There’s no theater in San Francisco of adequate size, certainly not big enough for dance companies such as Alvin Ailey, Mark Morris, or the Bolshoi.” -- Robert Cole, WAW advisorCole compared what the Palace could be to the Park Avenue Armory at 66th Street in Manhattan. “In that kind of space,” said Cole, “you could present something really big, like Black Watch.” That was an Olivier Award-winning play about the Iraq War, produced by the National Theater of Scotland. It demanded an unusually long stage to accommodate soldiers marching off to war, though it was performed on tour here, presented by American Conservatory Theater in 2013.

As an aside, at one point Cole tried to persuade ACT to do Black Watch at the Craneway Pavilion in Richmond. It’s an old Ford factory, which was re-imagined by Eddy Orton to be, in part, a performing arts venue. But ACT declined that possibility, and eventually produced the show at the San Francisco armory.

The WAW proposal, which would give the palace the pseudonym, the Center for Global Arts and Cultures, calls for capital improvements totaling $150 million. By contrast, recent improvements to the Herbst Theater ran to $156 million.

By the terms of the Rec & Park agreement, the competition winner must spend a minimum of $20 million in capital improvements. Naturally, if the space were returned to a tennis club, additional monies would be relatively small compared with an arts organization, where improvements would include stage equipment and rigging and a complete makeover to accommodate new technologies.

“Raising the kind of money we’re talking about is going to seem like a stretch for some people,” says Julie Mushet. “But all I can say is, remember that David Koch put $100 million into the old New York State Theater in Lincoln Center; and David Geffen paid $100 million to put Avery Fisher Hall in his name. And remember, also, that California is dead last [among U.S. states] in the per-capita amount of money spent on the arts. The question is, when are we going to decide that the arts in this country — and in this state and in this city — when are we going to decide that they’re not a luxury but crucial?”

The WAW plan calls for a single management entity to oversee both the theater and the exhibition space, which would include a restaurant and one or two rehearsal halls. Those could be rented out by local theatrical companies, or used to present large scale installations. The restaurant would be, according to Cole, “not fancy, but of high quality,” and designed with tourists in mind.

Concept summaries will be posted online. Proposals have been evaluated on the basis of financial wherewithal, how the plan deals with public access, and Park & Rec goals overall. Other considerations include compatibility with the surrounding neighborhood. The Palace comprises more than 140,000 square feet, but could be extended to as much as 175,000 square feet, without exterior additions.

This article was revised, with additions, on May 24.

Correction: The UC Berkeley Art Museum and Pacific Film Archive will be reopening next year in a new facility in downtown Berkeley and was incorrectly listed as a prospective tenant for the Palace of the Fine Arts space.