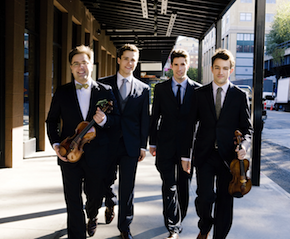 Looking through the varied wealth of [email protected] offerings, the 12th annual festival running July 18 through Aug. 9, you will find some especially attractive string quartet programs.

The Escher Quartet, which made such an impression at its debut here in 2007, just two years after its formation at the Manhattan School of Music, has a concert not to be missed on July 23: all of Alexander von Zemlinsky's string quartets (except the pre-No. 1 String Quartet in D Major), spanning time between 1896 and 1936 — as well as Brahmsian neoclassicism to Schoenberg and to an homage to the composer's pupil and friend, Alban Berg.

The Zemlinsky set has been recorded by the Escher on the Naxos label. The ensemble currently consists of Adam Barnett-Hart, Aaron Boyd, violins; Pierre Lapointe, viola; Dane Johansen, cello. Barnett-Hart and Lapointe are the two remaining original members. 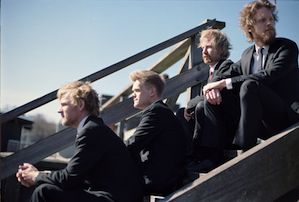 The Escher will join the Danish String Quartet and seven festival notables (including Wu Han on timpani) at the July 19 festival-opening "Dvořák in Context" concert, to perform the Bartók Divertimento for String Orchestra. The concert also features the Quartet in Dvořák's String Quartet No. 10 with the Escher; Mozart's Serenade in D Major, K. 239, and Martinů's Three Madrigals for Violin and Viola

The Danish Quartet — of Frederik Øland and Rune Tonsgaard Sørensen, violins; Asbjørn Nørgaard, viola; Fredrik Schøyen Sjölin, cello — will have its night on July 25, in the "Lobkowicz Legacy" concert, performing Haydn's String Quartet in G Major, Op. 77, No. 1, Beethoven's String Quartet No. 1 in F Major, Op. 18, No. 1, and Beethoven's No. 10 in E-flat Major ("Harp").

The first of the always-fascinating Prelude Performances starts at 3:30 p.m. on July 19, featuring young artists in the Dvořák String Quintet No. 3 ("American") and Beethoven's Trio in C Minor. Prelude Performances are still free, but tickets should be obtained either at Will Call beginning one hour prior to the start of each concert or reserved online in advance on the day of the event after 9 a.m.