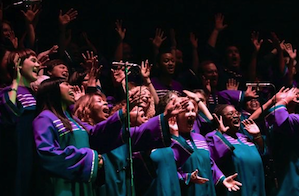 The Oakland Interfaith Gospel Choir: Three Grammy-winning award albums. One of the treasures of the Bay Area. Diverse in every sense. Their bread and butter ranges from spirituals to contemporary gospel. In the Interfaith Youth Choir, there are 21 kids from far and wide, ages 13 to 18. Everyone auditions, usually in February. “We do it just to make sure they’re not tone deaf,” says Terrance Kelly who founded the adult choir 27 years ago and the kid’s choir 14 years ago.

Ninety-eight percent of youth choir members go on to college, including Oberlin, Berklee College of Music, UC Berkeley, Stanford, Hampton, Morehouse, and one graduate is now at Harvard Business School. How do you it? we asked Kelly.

Next year, the kids are going to sing in New Orleans and on the trip, visit a plantation and an alligator farm. “Some of these kids haven’t spent any time outside a city,” Kelly said.

“Seven years ago I had a 14-year-old girl; she was having a rough time, problems with her parents, problems with life. She had a .67 GPA. I told her that was about the price of a piece of candy, not a GPA. So I just fussed and fussed and threatened to kick her out, but lovin’ on her too. She got herself together and graduated with a 3.2. She called me Poppy. So I’m mean, but sweet and I just love ‘em to death. That’s the secret, they have to know you love ‘em.”

“If you expect nothing you get nothing,” Kelly added. “I expect big things and they do big things.”

The annual holiday concert is on December 16, 7 p.m. Program includes holiday songs, and maybe one or two “positive songs,” including I Believe I Can Fly. At the Imani Community Church, 3300 MacArthur Blvd. in Oakland. Donations requested: $20 for adults: 18 and under, $10.