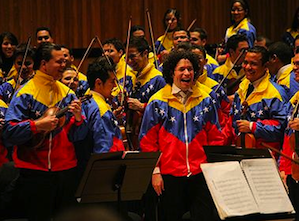 Cal Performances is hosting an extraordinary meeting of El Sistema originators, leaders, practitioners — and world-renown alumni of the program.

It is a two-day conference on music education, called "Reaching for the Stars," held in conjunction with the Jan Shrem and Maria Manetti Shrem Orchestra Residency of Gustavo Dudamel and the Simón Bolívar Symphony Orchestra, Nov. 28-29.

Dudamel, a product of El Sistema and music director of the Los Angeles Philharmonic, is Musical America's 2013 Musician of the Year, for his "charisma, tireless advocacy for music education, and expressive music-making." He is honored alongside his mentor, El Sistema's founder José Antonio Abreu, named 2013 Educator of the Year.

Dudamel, Abreu, Gillian Moore of London's Southbank Centre, Leni Boorstin of the Los Angeles Philharmonic, Stanford Thompson of Philadelphia's Play on Philly, and the hosting Cal Performances Director Matías Tarnopolsky are participating in the conference. Tickets are priced at only $15 per day, and the event is open to the public. 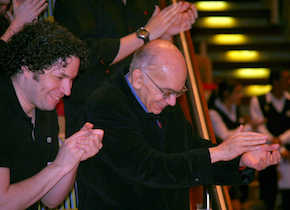 "For the children that we work with, music is practically the only way to a dignified social destiny," says Abreu. "Poverty means loneliness, sadness, anonymity. An orchestra means joy, motivation, teamwork, the aspiration to success."

"During this residency we will discover for ourselves, through our conference on music education, the essential nature of music education and how it transforms lives," says Tarnopolsky.

El Sistema has spread around the world. But among local projects created in the same spirit even before the Venezuelan method began to spread was the Young Musicians Program, founded in 1968.

Its mission has been "to identify musically gifted students who cannot afford the specialized training essential for the development of their innate abilities, and to provide them with a comprehensive music education, academic reinforcement, and personal guidance, on a full scholarship basis." 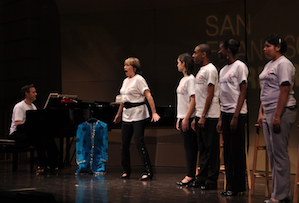 In the photo shown here of Flicka at a San Francisco Performances presentation of the Young Musicians Program last year, participants are: mezzo Therese Chaix, now a sophomore at Manhattan School of Music; tenor Adam Green, now a sophomore at University of the Pacific and a voice major, he also plays viola in the orchestra and is its librarian; soprano Christabel Nunoo, now a freshman voice major at the University of Michigan; soprano Priscillia Alva, now a freshman in high school, sang also in Martin Katz's masterclass for YMP last summer and "blew him away," according to Katz.