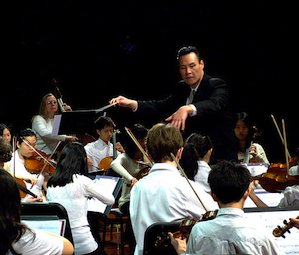 Thinking of parents looking to introduce their children to a classical music education (and sometimes, secretly or not, a career as a classical musician), we asked an accomplished musician for his advice. We reached Eugene Sor, a cellist perhaps best known for his work with the Chamberlain and Volta String Quartets, as well as his own ensemble. He was also featured in the 2008 documentary film, Freeway Philharmonic. And he serves on the faculty at the Crowden Music Center in Berkeley.

But forget your affiliations for a moment, we said, and talk in general terms about the arc of young musicians and how parents help or hinder the process.

Mr. Sor, who is Chinese, grew up in Millbrae and began his own career somewhat against the winds of his parent’s expectations: “They had some apprehensions about my going into music full bore. They saw music as supplementary to the bigger picture of learning … So music was really something I chose on my own.”

Now Sor has a five-year-old son of his own and he’s facing the challenge of wanting to encourage music but at the same time not wanting to push too hard. His son takes a basic violin class.

We definitely do want music in his life because my wife and I believe that playing in an ensemble, for example, gives you a chance to learn real life skills: how to function in a community, how to lead and follow and listen, and collaborate.

He’s five and there are some who would say well it’s late, he better be on his way. But to me, it still seems early. I didn’t start playing until I was 8. My wife was also 8 when she started. I would say that 4 or 5 is good age for piano; for strings it may take a little longer because it depends on when physical coordination sets in, along with ear coordination.

Asked his opinion of the Suzuki method, Sor says he endorses it for young kids, although he himself and his wife, the violinist Karen Shinozaki, don’t consider it for their son simply because they don’t have schedules that would allow them to be as involved as you need to be in that program. He added that his wife has her own ideas, which include the teachings of Serban Rusu, who began the Marin Conservatory of Music.

In a 1990 interview when Rusu was asked what he thought of Suzuki, he replied, “The problem with Suzuki is that it teaches the child how to say “Mama” but not the meaning of the word. There is a meaning behind every musical note and the student must learn to perceive intellectually the meaning of a piece of music.”

Rusu went on to describe his notion of the ideal musical education: “I’d start the very youngest student on eurhythmics. The first instrument would ideally be piano because it is a complex instrument with capabilities for demonstrating harmonic polyphony. Students should be exposed to theory, chamber music, duets, orchestra, sight-reading, and solfege. Then the student could start a melodic instrument such as the violin. You can save the history of music for last because you can learn that in college, but the other skills are best developed at an early age.”

Sor’s notion of exactly when to start is around 5, but as he points out “that’s not always realistic, to expect a child to sit still for 30 minutes. So you have to adjust to the child’s temperament, and maybe one option is a community class rather than private lessons where the intensity may be too much.”

“I have a friend who didn’t start until he was 14,” Sor went on, “and she’s doing quite well. The point is that you don’t have to start at 4 but you should start before you’re a teenager. All the studies show the way ‘music muscles’ and memory start to develop at a young age.”

A common trajectory at the Crowden Music Center, where Sor teaches, is that kids start at fourth grade, although they also serve kids as young as three. They may have private lessons, or they sing in a choir or play in a youth orchestra, and during the summer, in around eighth grade, in music festivals or camps. From Crowden, students may go on to places like the Ruth Asawa School of the Arts in San Francisco or San Domenico School for girls in Marin, and then off to conservatory or one of the music schools.

“Kenneth Renshaw, who just won a Menuhin competition in Beijing, came through Crowden, went on to SOTA and then to the New England Conservatory. David Requiro, a cellist, went to Crowden and then to a music school in Boston, and then to the Cleveland Institute.”

Sor says that while there are several points of reckoning, “in my experience, the serious students tend to know their path by the time they start high school or by the end of freshman year. I think the big thing on this arc is that you have to connect with a teacher who can inspire you. If you don’t have that then you’re not going to fully realize your potential.”

Sor, 42, says that his own inspirational teacher was Milly Rosner, a legend in Berkeley who taught at Crowden for many years.

And how will you know if your son is serious, we asked.

“I’m a firm believer,” Sor replied, “that if he’s taking the instrument out of the case without asking me, practicing the right way, and doing it daily, then he’s serious. But if he wants to be in the kitchen all day concocting recipes, it’s important for me to recognize that and support him. Perhaps, the most important thing in that respect is that both parents be on the same page.”