The yin and yang of musical fashions and fads shift every 20 or 25 years, and always have done. In the 1950s, concert music fledged itself from new music in traditional tonal style and notation toward an increasing respect for serial music, and in the process up popped Elliot Carter, John Cage, Luciano Berio, Pierre Boulez, and the like. In that process, perfectly respectable and popular composers got pretty much shoved out of the nest. Performances of the major American composers of the early 20th century have radically dwindled, with the exceptions of Aaron Copland and Leonard Bernstein.

None of the major American composers of the 1930s and ‘40s stands more deserving of another listen than Samuel Barber, whose centennial birthday is March 9. Barber stands in danger of becoming another Johnny-One-Note composer like Paul Dukas. For, despite all his early success, the only real current standard repertory piece of Barber has become his Adagio for Strings. 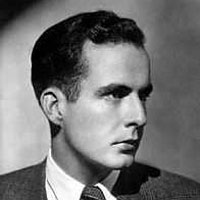 I suppose that many classical music lovers know Barber’s name, but few among even professional musicians know much about the man. That’s understandable, as he was something of a recluse. A shy man, Barber wasn’t given to bragging, or even teaching, and never wrote a book on music, let along a tell-all autobiography. (Try as mightily as I could, I’ve never found either a Barber anecdote or a funny remark or nasty comment from his lips.) 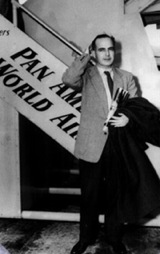 Barber was born in West Chester, Pennsylvania, into an upper-middle-class family, his father a doctor and his mother a competent pianist. As she was the sister of Metropolitan Opera contralto Louise Homer, there was always music in the Barber home, as well as trips to concerts in nearby Philadelphia. Barber never used his full name (Samuel Osborne Barber II), and to his friends he was simply “Sam.” He felt single-minded about composition, so much so that at age 8 or 9 (sources vary) he wrote a note to his mother who, that day, wanted him to go outside and play football, stating, “I’m no athlete. I was meant to be a composer, and will be I’m sure.” He wished to be a composer, and nothing more than that.

He is rarely credited with being a prodigy, though he was, and at a Mozartean level. He wrote his first opera, The Rose Tree, at age 10, his first piano pieces at age 7. Armed with these pieces, and more, Barber was accepted at the Curtis Institute of Music the year it opened, 1924. He was 14 years old. (He never allowed any of his juvenilia to be published.)

Aside from possessing serious talent, Barber was lucky. He had excellent teachers at Curtis: piano from Isabelle Vengerova, composition from Rosario Scalero, conducting from Fritz Reiner, voice with Emilio de Gogorza. He disliked giving public performances, yet he did record in all those musical areas. He displayed a pleasant, rich baritone in an early recording of his Dover Beach for voice and string quartet, Op. 3. He also conducted London-label recordings of his Symphony No. 2, Op. 19, and his Medea Suite, Op. 23, and accompanied Leontyne Price when she recorded his Hermit Songs, Op. 29. Barber also participated as one of the four pianists in a recording of Stravinsky’s Les Noces, conducted by the composer. (His cohorts on that session were all illustrious: Roger Sessions, Lukas Foss, and Aaron Copland.)

Writing From Heart and Head 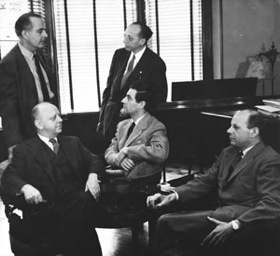 As for his compositions, Virgil Thomson summed up Barber’s style this way: “Romantic music, predominately emotional, embodying sophisticated workmanship and complete care.” Nicolas Slonimsky called him “A composer of superlative talents.” Some works are better than others, naturally, but Barber was never sloppy. He was not one to dash things off, which likely accounts for his relatively small catalog of music: fewer than 50 published works.

He was, as far as I know, the first and only resident composer of the U.S. Air Force, which he joined in 1942. What’s funny is that his commander told Barber he ought to be writing in a more-modern style if he intended to represent the Air Force. And so he increased the levels of both dissonance and rhythmic complexity in his Second Symphony, the Cello Concerto, and his little piano suite, called Excursions. That last was written to please ordinary airmen and features a boogie-woogie first movement, followed by a blues, a western song, and a square dance.

Along the way, Barber won a Prix de Rome, two Pulitzer Prizes — one for his opera Vanessa, and the other for the Piano Concerto — along with three Guggenheim awards and an honorary doctorate from Harvard in 1953. When Barber submitted his First Essay for Orchestra to Toscanini in 1937, the conductor said he’d do the premiere, but wanted something more to fill out the program; he suggested that Barber rescore the slow movement of his First String Quartet for string orchestra, and thus was born the ubiquitous Adagio for Strings. Toscanini promptly recorded both compositions.

On his Prix de Rome visit, Barber finished his stunning First Symphony, which was premiered there, then taken to the Salzburg Festival. Conductor Bruno Walter heard and liked it, whereupon he recorded it with the New York Philharmonic. And Barber was lucky, too, with performers throughout his career. The list reads like a who’s who of major musicians: conductors Toscanini, Walter, Eugene Ormandy, Serge Koussevitzky, Georg Szell, Rafael Kubelik, Dmitri Mitropoulos, Leonard Bernstein, and Zubin Mehta; vocalists Eleanor Steber, Regina Resnik, and Leontyne Price; pianists Horowitz, Rudolf Firkušný, and John Browning; and on and on. Those are merely the top of the list.

Man Without a Country Today, however, Barber’s music is rarely performed in his own country, though he’s often performed in Europe. France has a Samuel Barber Society that performs and lauds his works. Withal, you can hardly find a live performance of Vanessa for the centennial year. (There’ll be one in British Columbia.) San Francisco has yet to stage the opera.

And that’s too bad, because Barber’s music pleases audiences, as several popular pieces show. Besides the Adagio for Strings, you may have heard Knoxville, Summer of 1915, a work for soprano and orchestra that Jessica Rivera will sing in a Berkeley Symphony Orchestra concert next month. What’s remarkable is the general quality of his scores. Very few failures, like the Toccata Festiva for organ and orchestra, are to be found in his output. 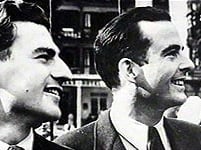 Among his super pieces are the early Overture to The School for Scandal, the First and Second Essays for orchestra, the First Symphony, the suite from his ballet Medea, Die Natali (a large choral prelude for orchestra based on popular Christmas carols), Commando March (originally for band), four Concertos (one each for violin, cello, and piano, plus the zesty Capricorn Concerto concerto grosso for flute, oboe, trumpet, and strings), a Cello Sonata, Op. 6, and the Piano Sonatas, Op. 26, Excursions and suite for piano duet, Souvenirs, that the ZOFO piano duet team (Eva-Maria Zimmermann and Keisuke Nakagoshi) will play on March 28 at Old First Concerts. I’ll take a breath, and then also mention Andromache’s Farewell for soprano and orchestra; and the 10 Hermit Songs, Op. 29.

Barber’s final years were not happy ones. He fell short of money, as his music had been shoved aside. He became depressed by his fall from high esteem, and he broke up with his life partner, the composer Gian Carlo Menotti, and had to sell their home (“Capricorn”), which they’d built in Mount Kisco, N.Y. It’s reported that Barber was drinking a lot, possibly a factor in some very late works of his (Essay No. 3 and several short piano pieces) falling flat.

Still, the great accomplishments of Barber’s first 35 creative years stand as a monument to one of America’s finest Romantic composers. Some major tributes ought to be raised to “Sam.”