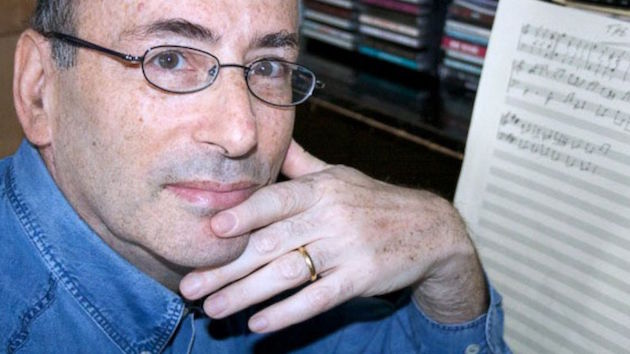 Waking up to find that he was suddenly and entirely deaf in his right ear on June 15, 2010, composer Richard Einhorn’s biggest worry wasn’t that he’d never work again. Nor was his greatest concern the spinning room and nausea, the way human voices sounded like screeching devils riding on crazed, squealing robots, or the piercing tinnitus, buzzing like a high-pitched, enraged refrigerator in his ear. Einhorn knew that he had only 30 percent hearing in his left ear, but didn’t know enough to worry about permanent damage to his other, “good ear.” He attributed the problem to allergies.

Einhorn wasn’t the only person in the world unfamiliar with the term, “Idiopathic Sudden Sensorineural Hearing Loss,” a medical emergency that occurs when the vestibulocochlear nerve goes wacky and basically, without immediate treatment with steroids, a person abruptly loses hearing forever.

Eventually, learning the cause was not allergies or earwax, as emergency room doctors in the hospital to which he fled first supposed, the then 57-year-old composer’s most monstrous fear was of becoming isolated. Married, with a daughter, accustomed to an interactive social life, Einhorn thought more like an average human being than like a musician. What would dinnertime be like? How would he converse and hear at parties and concerts? Would he be miserably lonely?

“It was easily the worst night of my life,” says Einhorn, in an interview from his home in New York City. “It was devastating on a personal level. It took me well over two years before I could physically and psychologically manage it.” 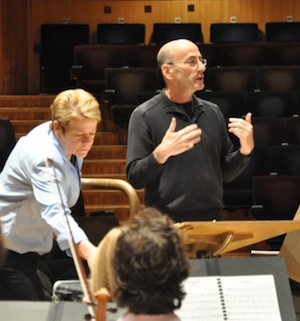 Growing up in New Jersey with parents who were not musicians, Einhorn’s childhood included the typical piano lessons. He was 15 in 1967 when he became intrigued by the sounds he heard on Frank Zappa's Freak Out album and stole his mother’s tape recorder. “I realized you could tape and then distort music. I formed a multimedia club and wrote electronic music. All my friends were experimenting with art forms. We even had early home video cameras. Our real lives were outside of school, playing with music.”

Einhorn’s “playing” led to his studying music at Columbia University, graduating summa cum laude. Before focusing on his own compositions, he was a record producer for Meredith Monk, New York Philharmonic, Philadelphia Orchestra and others. A production of the Bach Cello Suites with Yo-Yo Ma earned Einhorn a Grammy for Best Instrumental Performance. His Voices of Light, a choral work that accompanies the classic silent film, The Passion of Joan of Arc, is performed multiple times each year. A CD of Voices issued by Sony Classics topped the Billboard charts in 1995. His contemporary compositions include works for opera, orchestral and chamber music, song cycles, film music, and dance scores.

Interview with Richard Einhorn about his Voices of Light.

As anyone who’s heard of Beethoven or studied and practiced composition knows, the ability to hear is not integral to being a composer. Instead, imagination applied to a working knowledge of sound and the tools and techniques of the trade, is the essential element. Even so, Einhorn was in a bit of a pickle, given his preference for ping-pong counterpoints that bounce between sections in orchestral work and rhythmic complexity that he could no longer hear. “I’m not like Beethoven or some of my friends,” he says. “If I were completely deaf, I couldn’t compose. If I can’t hear (a part of) my music clearly, I won’t say it can be in my piece.” 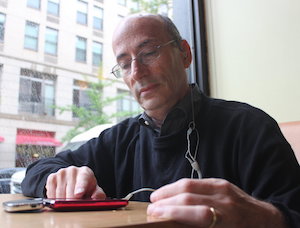 Because he today relies on a hearing aid to bring his left ear to 70 percent capability and all sound “arrives from the left,” the inner voice and texture of his music has become simpler and more stationary. “It’s like mono-hearing and spatial effects don’t happen anymore.” But there’s no need to feel sorry for him, Einhorn insists. “I know what I like, so I was not going to let something like this get in my way. You have to adjust your aesthetic, but you’re not going to overly react to it.”

Eventually, and largely due to technological advancements that have improved in-ear hearing aids, Einhorn adapted. His left ear, assisted, allows him to hear more than just the water hitting his head during a shower. In “noise-free” sound environments, like during a typical dinner at home, he can hear the conversation. “Without the hearing aid, I would only hear people if they shouted or screamed with laughter.”

At restaurants, in subway stations and other noisy environments, he’s learned to place himself strategically, to tilt his head and aim his hearing aid microphones toward a speaker’s mouth, and to ask for the music to be turned down. “I also have no compunction about asking people to repeat themselves or talk louder,” he says.” In super-noisy situations, he used to have to don high-quality headphones and aim a smartphone 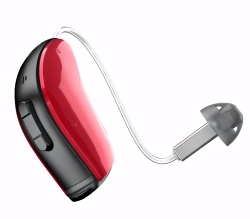 paired with a hearing assistance app at his companions, who wore small mics like pendants around their necks. It was a lot of equipment to haul around. Today, with two ReSound LiNX2 hearing aids (at a cost of over $2,500 each, which insurance does not cover), he uses an iPhone’s mic and an app without the need for those loaner necklaces. Einhorn says, “As bad as my problems are, they pale when compared to the problems that other people [with hearing loss] experience. What happened to me is really awful, but I can cope with it.”

Which doesn’t mean he didn’t suffer as an appreciator of music. Initially, attending live, nonamplified music concerts was distressing. The vast dynamic ranges were impossible for his hearing aid to compress — resulting in imbalances and background noise that sometimes exceeded the music’s volume. Einhorn despaired ... until a thin strand of copper wire known as a “t-coil” radiating electromagnetic signals in his hearing aid wirelessly connected to a hearing loop in a concert hall. The technology sent the crystal clear sound of the musical Wicked to his ear for the first time since he’d lost his hearing. The experience made him weep. Soon after, he climbed on his chariot to champion for hearing-loop systems in concert halls, churches, theaters, museums, banks, stores, subway stations, and other public places.

Einhorn became active in the national nonprofit organization Hearing Loss Association of America (HLAA), where he currently serves on the Board of Trustees. He formed his hearing loss consultancy firm, Einhorn Consulting LLC , and frequently writes for periodicals and publications about hearing loss and music. He’s “frankly shocked” that every hearing aid doesn’t have t-coil technology that can communicate wirelessly with electronic devices. “Throughout the developed world, at least fifty percent of communications comes through connectivity, the digital world. If you’re not a part of that in the 21st century, it’s impossible to be in this world.”

In a 2011 article about Einhorn in The New York Times, journalist John Tierney reports that the t-coil technology has been widely adopted in Northern Europe and writes, “New York is starting to catch up. Loops have been installed at the ticket windows of Yankee Stadium and Citi Field, at the Apple store in SoHo, and at exhibits and information kiosks at Ellis Island, the Metropolitan Museum of Art, and the American Museum of Natural History.” At the time, the New York subway system was placing loops in 500 fare booths — then the largest installation in the United States.

Einhorn receives a list of places “every day” that are adding the technology, but says progress is slow. Installing a system is a considerable, $10–$25 per seat investment, so most performance venues only offer portable headsets or neck loops. Einhorn and other experts point out the devices’ disadvantages: they must be borrowed, don’t always work in venues with high reverberations or noise, and some people find them inconvenient, even embarrassing to use. Which invites the question, what technology is available at Bay Area venues?

CAL Performances Public Relations Manager Louisa Spier writes in an email that their venues do not have installed hearing loop systems but some halls have portable hearing-assist neck loops for audience members with hearing aids.

Everett Doner, director of operations at New Century Chamber Orchestra, writes, “The Herbst Theatre and the Osher Marin Jewish Community Center have assisted listening devices they can distribute to patrons.” After further investigation, Doner says none of NCCO’s usual venues have installed systems, but adds, “If we ever build a hall of our own, it'll be on the list of things to have for sure.”

Higher educational institutions — Stanford, UC Berkeley, and others — and some public high schools and private K-12 schools offer some accommodations and support programs. As a student at The Harker School, a K-12 private school in San Jose, Jawadi’s math teacher provided videos of concepts discussed in class to the students. “Consequently, my interpretation of hearing accessibility in the classroom spans not just assistive technologies but rather universal accommodations that benefit everyone in the classroom,” she says. “Harker's teachers and administration even supported and encouraged me to create a video on teaching techniques for mainstreamed students with hearing loss. The video has been on YouTube for about three years.”

Future hope for people reliant on hearing aids is clearly complicated. Stem cell treatments may someday correct hearing loss that’s currently considered permanent, but it’s a faraway solution. The fine-tune features of hearing aids, designed to suit the highly individual needs of each person with hearing loss, will certainly improve. General awareness and progress in restructuring the hearing health-care arena to better support people with hearing loss will happen through advocacy and education, but again, change will not be swift. New concert halls may or may not have the budgets to integrate state-of-the-art assistive technology.

“And more awareness isn’t enough,” says Einhorn, suggesting that societal acceptance and systemic health-care changes must advance. “There’s stigma about hearing loss. There are structural problems in the health care field. It’s a perfect storm, but one that’s ripe for disruption.”

Jawadi says HLAA-CA is working to support a state bill related to hearing assistive technologies and hosting an Oct. 8 tech expo in Belmont, California, that will demonstrate the latest products and services for people with hearing loss.

In the meantime, nothing will stop Einhorn from continuing to compose music. “I’m working on a piano trio,” he says, “and performances in Orlando of Voices, a choral piece in Baltimore that I can’t tell you about yet ... and always, advocacy for HLAA.”